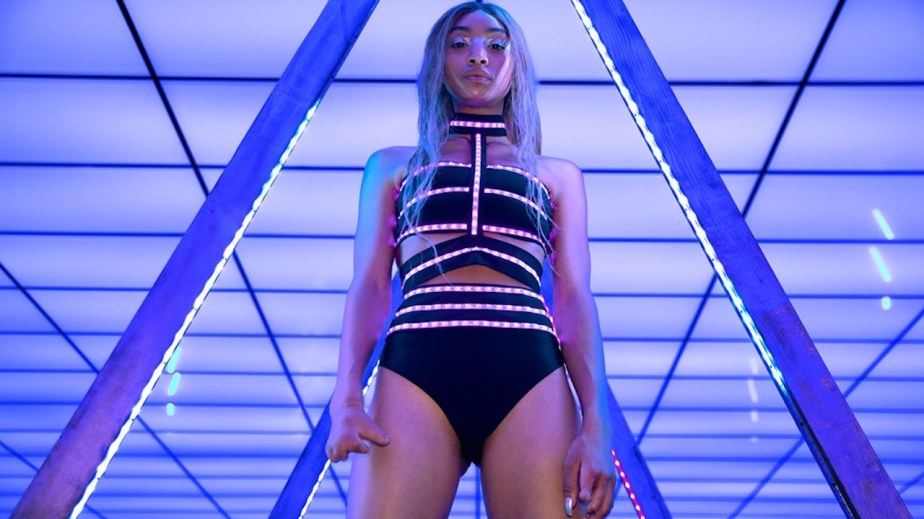 While Instagram has given rise to the fashion influencer — perfectly made up and styled in a chic, likely expensive outfit, captured in the perfect lighting with the best filters — TikTok is setting the stage for a different kind of social media influencer: the e-girl.

Compared to Instagram influencers, e-girls are less polished and posed. They post unedited, raw videos on TikTok, similar to Snapchat. They often sport brightly colored hair and heavy, winged eyeliner. Beyond that, where they shop and how they dress set them far apart from what much of the fashion industry has come to consider a traditional influencer.

“E-girl culture is an opposition to the pretty, polished, glam Instagram girl that was really popular a few years ago,” said Vynique, a YouTuber who goes by @vynique.moon on Instagram. While the term e-girl dates back to 2009, per a deep dive into the culture by Vox, and previously used as a derogatory term for female gamers, with the rise of TikTok on 2018 it became a more acceptable term for young women to call themselves and each other.

“To me, there is nothing better than finding an original piece of clothing for a cheap price, and knowing there is a history behind that piece. It’s also much more environmentally friendly to shop at second-hand stores,” said Maya, age 18, who classified her style as fluctuating depending on her mood and considers herself to be an e-girl. “Some days, I’ll wake up and feel like wearing darker outfits with lots of chains and dark makeup, while other days I’ll feel like wearing something cute and colorful, like a dress with sunflowers on it,” she said.

“I shop at Dolls Kill, Shein, Forever 21, Urban Outfitters and Princess Polly, and I thrift. Dolls Kill, Shein and thrift stores have really unique pieces that not a lot of people will be wearing, which I like. Plus, Dolls Kill carries a lot of brands,” said Vynique.

🙂 Cute but Dead inside 🙂

While e-girls are buying from Dolls Kill, a spokesperson said the brand’s not actively pursuing that customer. Rather, the brand strives to make “beautiful products for people so that they can dress however the fuck they want and express who they truly are,” they said.

Founded in 2011 by former DJ Shaudi “Shoddy” Lynn and her now husband and CEO Bobby Farahi, Dolls Kill started to help girls find their inner “I don’t give a fuck” attitude, the spokesperson said. That attitude can come in a range of styles and reach a wide variety of audiences. Products currently being sold on its e-commerce site include lace-up, knee-high platform boots; satin pink crop tops with feather necklines; “Clueless”-inspired plaid mini dresses and an oversized teddy bear backpack designed to look like a skeleton (also known as the “Deady Teddy Backpack”). While the brand spans generations, it is a particular draw for Gen-Z women, who will account for 40% of global consumers by next year, according to a recent report from McKinsey.

In December 2018, Dolls Kill raised up to $15 million, which the brand said it would dedicate to opening retail locations, according to Tech Crunch. Prior, it opened a permanent brick-and-mortar location in San Francisco in August 2017, followed by a second store in Los Angeles one year later. The brand does not disclose revenue, but as of 2014, it reportedly was on track to bring in $15 million in sales over its three years in business.

Part of what makes the Dolls Kill brand so attractive to Gen Z, and why it plays so well into something so specific as e-girl culture, is that it’s not one thing or one aesthetic. For example, the brand currently has six “Dolls,” or specific looks modeled by six different brand-created influencers, that can be found all over Dolls Kill’s social media feeds and e-commerce site. Each doll has a different style and aesthetic, used to showcase the various looks the brand sells.

“The dolls are a way for us to help identify these different types of customers. They are not singular; each individual who comes to shop at Dolls Kill can be Coco in the morning or Mia at night,” a spokesperson for Dolls Kill said.

the angel 👼🏼 from my nightmare 👹 Dollskill.com/WIDOW 🕷🕸

Another reason it’s possibly so attractive to Gen Z is it’s a brand that doesn’t look like anything else on the market, said Richie Siegel, founder and lead analyst at Loose Threads.

“It’s pretty unique among what it is, and arguably, a lot of the stuff they have is sold in traditional retail stores. You can get this sort of aesthetic elsewhere, but it seems like [Dolls Kill] just has a better distribution system and ability to market it,” Siegel said.

To date, the brand has amassed over 2.8 million Instagram followers where it posts its latest styles via shoppable posts as well as customer photos. The latter is a tool that many fast-fashion brands including Fashion Nova and Boohoo use to build a sense of community among followers.

The brand’s social following isn’t as high as some of its fast-fashion counterparts — Fashion Nova has 16.3 million followers, Boohoo has 6.1 million and Nasty Gal has 3.8 million. But it is taking a share of the fast-fashion market from behemoths Zara and H&M, Siegel said.

“In the last few years, H&M has really been struggling, and Zara has been doing OK, but is slowing. You can kind of start to see that that fast-fashion approach is getting sliced up. You have a Fashion Nova, you have a Revolve, in a sense, you have Dolls Kill. It’s interesting to see that fragmentation, even though it’s with the same business model. And there is audience overlap there as, well,” he said.

But Dolls Kill is a somewhat of a rebel in the market. Revolve hosts its annual Revolve Festival, a massive party designed to be posted about on Instagram held for celebrities and influencers, held alongside Coachella. While Revolve focuses on brining in big name celebrities, and creating a sense of FOMO for followers, Dolls Kill does the opposite.

In March, the brand began touring the country in a revamped ice cream truck as part of its “Bling Tour.” The truck, which was essentially a traveling pop-up store, toured around the East Coast, stopping at eight cities along the way. It only sold one item, the Billionaire Bling Boot, which originally sold out within an hour when the brand dropped it online last year. This August, the brand brought back its “tour,” designed to feel like a band tour or music festival, bumping up to 18 cities with five blinged-out boot styles.

Amber Atherton, CEO of market platform Zyper, said the strategy of avoiding mega-influencers is a large part of what drives loyalty from Gen Z. “They see the use of mega-influencers as a turn-off. The generation values hype that’s more organic, and brands that use mega-influencers are indicating that they have to spend money to create sponsored content, because they don’t have a genuine following of fans who are willing to generate authentic content for them.”