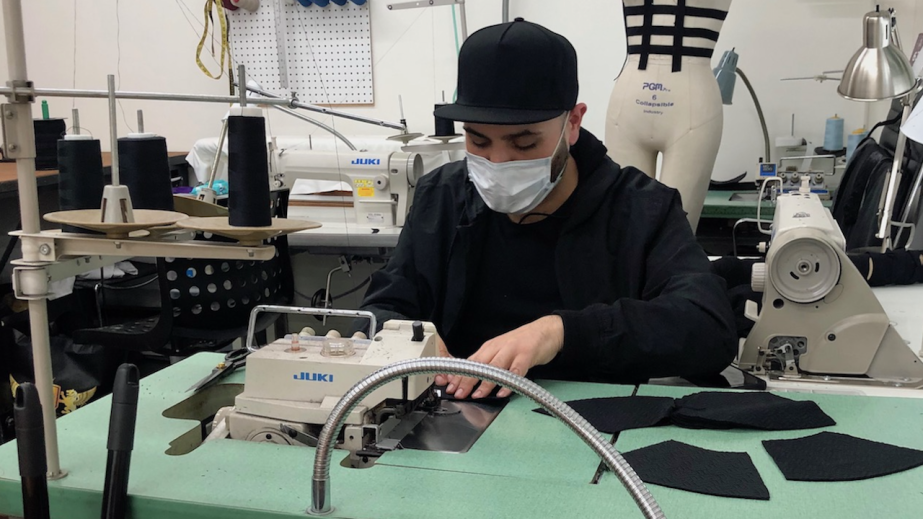 When California and New York announced statewide lockdowns late last week, it was a jolt to workers in the notoriously hard-working fashion industry. Rather than take it lying down, many started fighting for their companies. They may have closed their stores, but they put store associates to work to optimize their online presence. They halted operations in distribution centers, but enabled shipping from closed stores. And rather than cease production altogether, they found a workaround in the form of making medical masks — a task that fulfills a large global need, plus provides a sense of comfort to workers during an unprecedented time.

For this story, I interviewed seven fashion workers from seven fashion brands that have put employees to work making or distributing masks. All reported a different production quota and, controversially, described a different set of standards that their versions meet. Many of their masks would be rejected by a hospital.

Brooklyn-based luxury designer Kelsey Randall said she started with a goal of making masks and encouraged others to follow suit after being inspired by non-profit organization Global Response Management’s #millionmaskchallenge initiative, aimed at providing masks to high-risk communities. Her version is neither FDA-approved nor N95-grade, but it can be washed and reworn, which is a plus during the shortage, she said. And they can help those providing essential jobs, like grocery workers. To get support from other sewers, including fashion students sent home for the semester, she’s shared the pattern in Instagram posts and Stories, plus it’s featured on the homepage of kelseyrandall.com.

Then there was New York Fashion Week regular Michael Costello, who has set out with his team to make 20,000 masks, starting with a lower-grade version until materials become available. The first batch, made from a cotton-nylon blend, provides 70-74% air filtration, compared to a surgical face mask that provides 97%. Eventually, he’ll move to working with vacuum cleaner bags with HEPA filters, which according to his research, are nearly as effective as N95 masks.

There was also Paige Mycoskie, founder of California-based Aviator Nation, who said she’s compiled a team to work in the company’s warehouse to daily produce thousands of surgical masks, which they then are sending to hospitals in the area. “Every little bit helps,” she said.

And outside of the U.S., Marianna Rosati, creative director of Italian fashion brand Drome, said she and her “small taskforce” of up to seven seamstresses have signed on to make 100-150 masks every day that meet the standards for Italian health-care providers.

Other companies are doing their part by funding or distributing masks: L.A.-based Sene Studio, which makes custom workwear, is donating “tens of thousands” of FDA-certified medical masks made in its factory to more than 200 hospitals, said CEO Ray Li. It’s seeking funding from celeb types to ramp up production, as it has the capacity to make 500,000 masks on a weekly basis. And Danielle Bernstein’s e-commerce company. Shop WeWoreWhat, is distributing 5,000 N95 masks produced in its factory to health-care workers by way of donation platform Mask a Hero.

All the companies said they’re donating the masks, and aside from Neiman Marcus’ deal with Joann, all are paying for needed supplies. They’re also taking safety precautions, like providing workers with masks and enforcing a rule of six feet, minimum, between them.

But in talking with them, some less expected commonalities became apparent. Most notably, most everyone orchestrating the mask-making exercise sees it as a way to ensure their employees’ mental health, and their own.

Randall said she’s been “panicking and really scared” about the coronavirus’ potential effects since January, but she started feeling especially helpless last week, when she began self-quarantining in her apartment-slash-work studio.

“I was still sewing and doing projects, as normal, but I was so anxious,” she said. “It’s just a stressful time, and I was losing a lot of sleep. So I asked the universe for a sign that I am taken care of and can somehow be of service, and that’s when I got the email from Global Response Management [asking for help].”

Since, she, her assistant and her interns, have been pouring their energy into securing materials, making masks and seeking out other sewers to contribute. Randall’s friends from fashion school have signed on to make masks, as have fellow designers. Randall’s team is also creating DIY packets with all materials needed to make the process simple for all sewers who opt to sign on.

Costello said he had a hint of the coronavirus’ impact on the U.S. when his suppliers in China and Italy began cancelling orders last month. “Still, I really didn’t expect anything like this to happen,” he said. “It really feels like the end of time, like biblical times.”

His company is located in California, and he began sending his employees home last week, following the state’s mandate for non-essential businesses to close shop. “It hurt not waking up and getting to see the ladies I’ve been used to seeing every day, 12-14 hours a day, for the last seven years,” he said. “We cried, and we kept crying, and we decided to get back together this week to try to work.”

Working with a max of two people per room, he and three seamstresses started making masks, and he said they’ll continue to do so until it’s business as usual — despite naysayers.

“I keep getting messages from people on email and social media saying that the government will not approve them, hospitals won’t take them, they’re not going to help and I should just stay home,” he said. “But that’s not the case. We’re also giving people hope and something to do in this time of isolation.”

It’s about keeping the energy up, echoed Aviator Nation’s Mycoskie. “I was hearing from my team that they wanted to help, and so I said let’s do it — and that’s what’s fueling me right now, really taking care of our people.” she said.

Others had similar sentiments: “It’s a very weird time for everyone,” said Rosati. “There’s uncertainty about the future, about how everyone will continue to make a wage — so you’ve got to foster relationships and consider people’s mental health.”

Li referenced a brief by consulting firm Bain & Company, stating that, in crisis, people are looking for a way to ease their anxiety, get what they need, and feel a sense of belonging and community. He has kept that in mind in managing his employees during this time.

“If you’re busy trying to help other people, you’re not going to be in fear, yourself,” he said, noting that one employee volunteered to personally fund the making of 500 masks.

Likewise, Neiman Marcus workers have fully embraced the concept. The idea to make masks came from an employee who also established the Joann partnership, and alterations specialists have asked how their family members in the same field can contribute, said Weirich.

“We’ve really focused on internally getting our associates excited about the partnership and the collaboration,” he said. It’s worth noting that bankruptcy rumors have been swirling around Neiman Marcus this week. “We’re really committed to creating a moment that really brings people together, emotionally. It’s a kind of story that we need right now.”

In addition — aside from the obvious motivator of containing coronavirus, which is restricting sales entirely for Costello and Randall — the workers admitted that marketing social good was related to their decision to take on mask production.

“If someone’s going to spend money now, they’re going to spend it with a company that’s trying to make a difference,” said Li, in terms of immediate sales.

And Costello is aware of how his actions now will impact consumer behavior post-coronavirus. He noted that others should use this time to be as thoughtful: “I hate seeing influencers not using their voice or using #coronavirus to drive followers to their social channels,” he said. “In the end, every aspect of the fashion industry is going to suffer, including influencers — because where are they going to go, and who’s going to dress them? They might as well use their voice now, and get something good going for themselves.”

As for Bernstein, she said her own mask project has inspired her to do more: “All of my upcoming launches will have a charitable initiative attached to them,” she said.

Finally, Randall said she hopes larger companies will catch wind of what she’s doing and get inspired. “What I’m doing is an imperfect solution to a medical supply crisis that can really only be solved by large corporations using the resources they have, like automation. It doesn’t make sense that I am sitting here cutting layers of fabric — but that’s what we can contribute right now.”