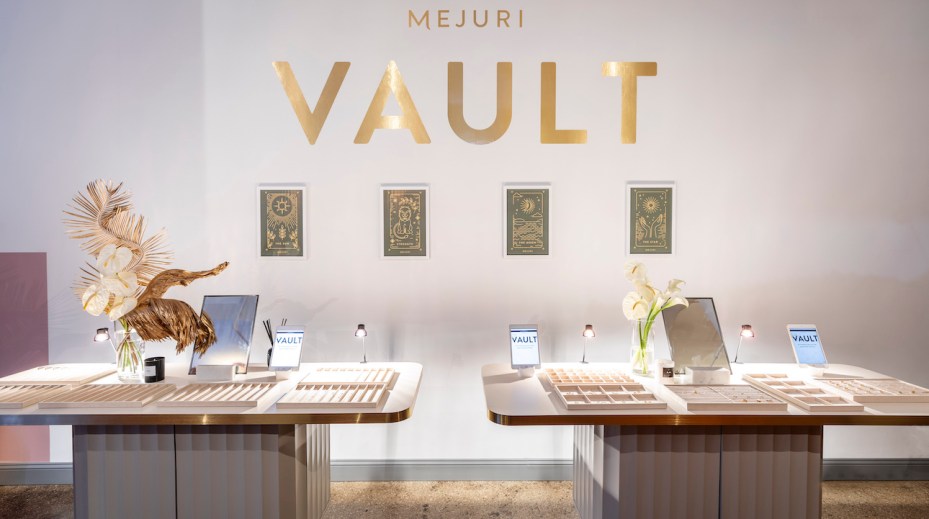 Five days before Thanksgiving, DTC jewelry brand Mejuri opened a four-week experiential space in Chelsea to celebrate the company’s five-year anniversary. Called The Vault, it sits just 1.6 miles from Mejuri’s permanent showroom space in Soho but serves a different purpose. The focus isn’t to drive sales but to continue building brand awareness and customer loyalty in a setting that’s fit for Instagram and influencers.

“The Vault is not about transactional relationships. It’s taking retail to a level of hospitality and relationship building, and building dialogue with our existing customers and getting to know some new ones,” said Aila Morin, director of brand marketing at Mejuri.

The pop-up has been, for the last few years, a tried-and-true strategy for young DTC brands looking to expand into physical retail. And just as pop-ups help young companies edge into brick-and-mortar for the first time, established companies continue to see the value in pop-ups when testing new markets, looking to build in-person relationships with customers and to boost online sales.

Mejuri, for its part, dabbled in pop-ups before opening three permanent locations. The first opened in Toronto in July 2018, followed by New York earlier this year and then Los Angeles. A San Francisco store is slated to open in the coming weeks, followed by further expansion in the U.S. The company is also eyeing Canada, as well as other global locations.

“Retail and being in front of our customers in real life has become a very central portion of Mejuri. We’re growing our team internally to support that strategy,” said Noura Sakkijha, co-founder and CEO of Mejuri.

And yet, Mejuri plans to keep pop-ups in its larger retail strategy.

While Mejuri said its four-week experience isn’t about driving sales, these types of pop-up spaces do tend to boost online sales. People learn about the brand, see the product and then a few days later, they decide to make a purchase. According to Sakkijha, Mejuri sees, on average, a 30% boost in online sales tied to physical spaces and pop-ups.

The Vault, in particular, led to an increase of 124% in Instagram mentions globally in the week before the space launched. Additionally, in-store conversion rates were four times higher than the average conversion rate for pop-ups, according to the brand. The brand declined to provide specifics, but plans to host more of these pop-ups in the future.

For many brands that are still young and looking to grow in new markets, like Mejuri and suitcase company Away (which launched in 2015), pop-ups can help identify what new cities the brand should be opening stores in. Ideally it’s a less costly way to do that, depending on the length of the pop-up.

After securing $100 million in Series D funding in May, Away shared plans to open 50 additional stores in the next three years. Currently, Away has seven retail locations across the U.S. and London. Even with an aggressive expansion plan, pop-ups will still play a part in the overall strategy.

“Growing our permanent locations globally remains a top priority for our company, and, in some cases, a pop-up can be the best way to get to know a local community of travelers and offer new, one-of-a-kind experiences,” said Justin Reis, director of special projects at Away.

While pop-ups help measure a city’s appetite for the brand, they can also help companies provide more one-on-one experiences to customers. They’re also commonly designed for posting to Instagram, and therefore great for getting some word-of-mouth attention when customers post about the space to their accounts.

On Black Friday, Away opened a temporary space in Williamsburg, Brooklyn — open through Jan. 5 — that not only sells some of the company’s suitcases but offers up hand-painting services on any purchases, allowing customers to personalize products.

“Customization is huge for successful pop-ups. If it’s as simple as being able to design their own T-shirt on the fly in five minutes, it just adds such a level of cheer and smile to people’s faces,” said Hope Newman, creative director at The Pop Up Shop Agency.