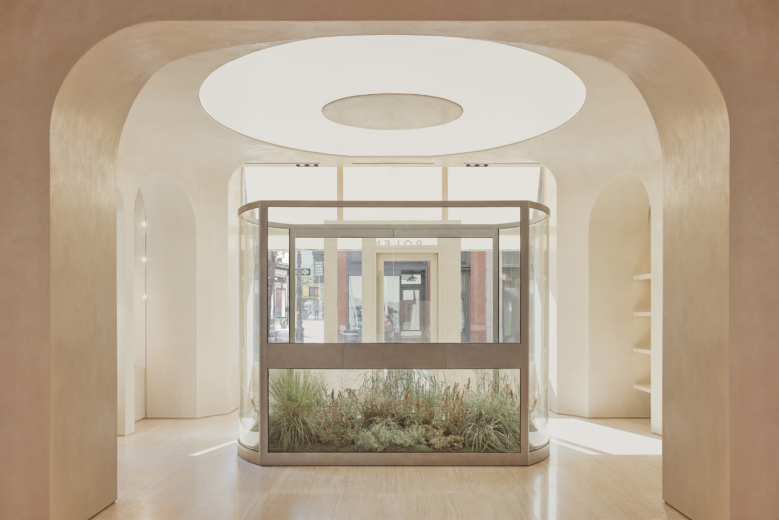 French brands are expanding their retail presence to the U.S.

Mid-range and fast-fashion retailers like River Island and Mango are expanding their U.S. footprints, with North America being viewed as a safe bet compared to the increasingly unstable European and Asian markets. French department store chain Printemps announced in September that it’s opening its first U.S. store on New York City’s Wall Street in spring 2024. The NYC store marks its first international storefront.

For its part, luxury leather goods brand Polène opened its first international store in North America in September, after only selling online internationally and in its Paris store for six years. The Soho-based NYC store is an extension of the brand’s visual identity, with minimalist interiors reflecting the product design. Polène co-founder Antoine Mothay said the company focused on creating a desirable destination for potential customers outside of Paris.

“It took us a year and a half to find a space that fit all our requirements. Soho is great because it is central and easily accessible with several luxury stores, but it was not a determining factor [for us] to be located in a busy area, as we create destination stores,” said Mothay. “What we look at is the actual space. Our aim is to create an impactful retail environment that is statuesque.” Along with the retail expansion, the brand plans to expand its product assortment to jewelry and footwear in 2023. It also plans to introduce an in-store upcycling initiative. Polène did not disclose sales figures, but shared that it’s seen a doubling growth rate every year.

Mothay said the company’s experiential focus is especially important in stateside brick-and-mortar retail. “The U.S. market is more accustomed to in-depth retail experiences, so this was something that we worked on and developed in our store. The opening of the NY flagship has led to a new spotlight on technology, with the aim of creating a highly experiential and impactful space,” said Mothay.

Among the customer-facing innovations Polène has planned for the store is a semi-robotized workshop that has been engineered to cut and sculpt small leather goods. Visitors will be invited to engage in each step of manufacturing by creating a product using leather scraps from a wide choice of patterns. “This builds on customer knowledge and intimacy with the brand, as well as all aspects of manufacturing and production,” said Mothay.

Paul Griffin, president and CEO of Sandro North America, said the 38-year-old brand is so far winning in the U.S. by opening stores on “important” streets alongside luxury brands while focusing marketing on new platforms like TikTok. The brand opened its first store in New York in 2011 on Bleecker Street and has since built out its U.S. footprint to 18 stores, in states including New York, California, Texas and Florida. Valley Fair was its most recent opening prior to the pandemic in 2020, before that was the reopening of the brand’s NY Flagship on Prince Street, and The Grove in LA in 2019. The brand also sells at Bloomingdale’s and Nordstrom. It’s launching U.S. resale this month on its online marketplace, mirroring similar projects currently running in France and Germany and is planning more U.S. expansion in 2023.

“It’s a highly competitive market, therefore it’s important to stand out from the crowd with a strong marketing and communications strategy,” said Griffin. “You have to continue to embrace innovation through digital, social, influencers and VIP [strategies]. Maintaining brand desirability is our top priority. The U.S. customer loves to be engaged, more so than in Europe. Prioritizing your CRM strategy is important so that we can continue to have personalized outreach and build brand loyalty.”

French brands are being propped up in the U.S. retail market by French retail federations. The French Footwear Federation launched a four-week “French Edit” pop-up in New York at the beginning of October at the Neighborhood Goods store in the Chelsea Market neighborhood. It presented the collections of six French shoe brands without a prior U.S. presence, including Arche, which does $13 million in annual sales, and Pare Gabia, which does $4 million.

“The U.S. has always been an important market for French brands. It is growing especially fast in the post-pandemic, driven in part by luxury footwear,” said Michelle Guilloux-Bonnet, head of the French Footwear Federation.

Polène’s focus on quality and sustainability has been key to earning a customer base in North America, according to execs. Therefore, it is borrowing from the popularity of sustainable-first brands like Veja, Pangaia and cosmetics brand Ren by making sustainability a constant focus. The brand announced a number of sustainability initiatives in September, including making use of material waste and shifting to sail-powered shipping next year. It’s also commissioned artists including Jorge Penades to create furniture for the store using the brand’s offcuts.