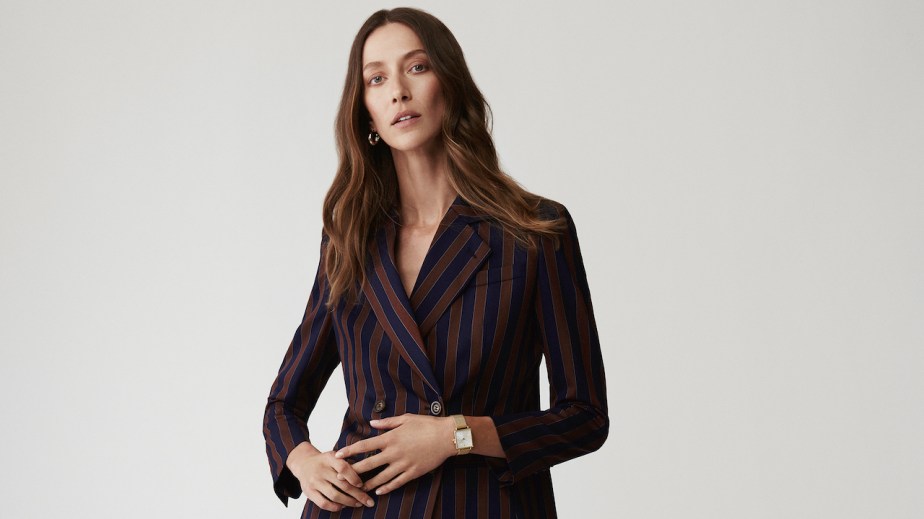 Fashion Briefing: The next era of women’s suiting is upon us

The next era of women’s suiting is upon us

On Friday, 15-year-old Indochino, maker of custom men’s suits, announced its expansion into women’s custom suiting. Two suit silhouettes developed with women’s bodies in mind are now being offered in eight of its stores across Toronto, Seattle, Vancouver and New York. It also introduced its first skirt.

Other companies specializing in men’s tailoring have recently expanded into women’s styles and, subsequently, reported results punctuating the opportunity. They include Japan-based Kashiyama, which launched in the U.S. three years ago, expanding its custom suiting options in the market to include women’s fits in 2020. Its sales in the category have since grown every month, with an especially “big uptick” in the last eight months, according to BJ McCahill, vp of Kashiyama. Meanwhile, Chicago-based SuitShop, which expanded its tuxedo business to include women’s styles in late 2019, reportedly grew its revenue from $3 million to $20 million in the subsequent two years.

Leaders of these brands say trends are working in their favor. Many women are looking to update the fits of their go-to work suiting to feel more comfortable and, therefore, current. Others want to level-up from wearing matching athleisure sets to sporting more polished looks that are just as effortless. Finally, there are those aiming to modernize their approach to occasionwear by thinking beyond predictable, more formal-feel dresses — with consumers becoming increasingly budget-conscious, clothing purchases’ cost-per-wear has also become a bigger consideration.

For Indochino, getting womenswear right will require a slow-and-steady approach, said CEO Drew Green. “We’ve been selling [exclusively] to men for 15 years; we have a lot to learn,” he said.

At the earliest, the company will roll out the women’s category to its e-commerce site and the remaining bulk of its showrooms toward the end of this year, after perfecting the offering and customer experience based on customer feedback. After opening six more stores between now and October, it will have 93 locations across 44 markets, none of which will exclusively sell women’s styles. The plan is to also, eventually, launch fabrics catering to women’s preferences.

As Indochino’s been “very conservative in budgeting” for the womenswear launch, there’s no pressure to move fast, Green said. However, he predicted that the company’s women’s business will be as big as its men’s business in 10 years. From 2020 to 2021, Indochino’s sales grew 85%.

“We’re growing at a rapid rate, and we’re doing it profitably,” he said. “At the same time, we’re investing in the business and maximizing every opportunity.”

Over the next 12-24 months, Indochino plans to refine its existing categories, versus introducing new ones. It launched outerwear and casualwear just before the pandemic and has since built on the latter. Green said he expects in-the-works partnerships set for 2023 to be business “accelerants.” Even so, he has no plans to seek out additional funding.

Until the broader women’s suiting launch, Indochino will hold off on investing in any of its usual, channel-spanning marketing levers of search, social, display media, affiliates, out-of-home, radio and TV. “Celebrity and athlete endorsers” will eventually be included, he said. On Friday, the company sent out a press release and an announcement email to existing customers, plus it posted about the launch on its social channels. Green anticipates Indochino will also earn women customers in-store while they’re shopping for wedding looks with their fiancés.

The made-to-measure womenswear experience of Indochino’s manufacturing partner, China-based Dayang Group, will no doubt prove a boon for the company as it lifts womenswear off the ground. The Group makes suits for brands including Ralph Lauren and J.Crew. Indochino’s women-heavy workforce should also prove beneficial; on top of “half the management team,” more than 50% of all workers are women, Green estimated. And COO Morgan Whitney led the womenswear launch, bringing “her views” to the project, he said. No new hires were required to kick off the category, though store associates underwent training on how to fit the new styles.

But the company is going in with an open mind on how shoppers will take to the styles. According to Green, following the soft launch of the women’s category, a woman customer in Seattle bought a suit made up of a jacket in the made-for-women “Madison” silhouette and a pair of pants from the men’s assortment. “She just liked the cut of the [men’s] pants better,” he said.

He added, “Our customer likes that they can have fun and find a look that’s truly custom. And we want to serve all genders. [Womenswear] is our next adventure.”

There’s clearly opportunity. For its part, Onward Group-owned Kashiyama has seen its women’s suiting grow to make up 20% of its U.S. business. Its dedicated assortment has evolved based on demand to include oversized jackets “with a bit more edge,” jackets with cropped lengths and longer sleeves, wide-leg pants and skirts that are wider and longer than pencil styles. It’s also started offering fabrics in bright colors including yellow and purple.

“There are fewer cut-and-dry rules in women’s suiting,” McCahill said. “There’s more freedom to play with silhouettes and proportions, and the opportunity to customize has proven [valuable] to women.”

Kashiyama’s women’s shopper base has come to include working women, fashion-forward women who see custom styles as a means of self-expression and women who have written of the idea of wearing dresses for special occasions. Kashiyama is now seeing demand from retailers wanting to sell its women’s styles, McCahill said.

“For so long [during the pandemic], we were trapped at home,” he said. “It feels nice to be able to dress up again and, kind of, show off to the world a little bit.”

While pre-pandemic suiting options were often regarded as stale or stuffy, today’s offerings have managed to make the category feel fresh. Three-piece suits with loose fits have been rolled out by cool-girl outfitter Rouje, indie retailer The Frankie Shop and Arielle Charnas’s Something Navy, timed with the brand’s relaunch on Friday. Versions featuring cropped blazers have proliferated runways and fast-fashion assortments for the past two years. And rainbow-bright options are catching on. Just this week, fashion model-entrepreneur Karlie Kloss wore hot pink and orange versions on back-to-back days while visiting her Kode With Klossy camps for teens — the latter was by Another Tomorrow, launched in 2020.

According to Kayla Marci, market analyst at retail intelligence company Edited, the number of women’s suiting options available at U.S. and U.K. online fashion retailers has increased by 151% year-over-year. And the pre-spring 2023 runways provided evidence that the trend is set to stick. Marci pointed to the three-piece suits shown at Victoria Beckham; the slouchy, single-breasted blazers at Stella McCartney and the preppy mini-skirt sets at Philipp Plein. A May 2022 report by Grand View Research shows that the women’s suits and ensembles market is expected to expand at a compound annual growth rate of 4.8% from 2022-2028, reaching $16 billion.

Many companies well-known for selling traditional suits were pounded by the pandemic’s effects, opening the door for new entrants and innovation. Both Brooks Brothers and J.Crew filed for bankruptcy, formal workwear sources including MM.LaFleur changed their focus to be business casual, and Indochino competitor Suitsupply shuttered its own women’s business, Suistudio, while making other cuts.

What Tapestry, Inc.’s earnings revealed about the state of ‘aspirational luxury’

On Thursday, Tapestry, Inc., the parent company of Coach, Kate Spade and Stuart Weitzman, reported its earnings for its fiscal 2022. In the year, it achieved a record $6.7 billion in revenue, which was a 15% increase over 2021 and an 11% boost over pre-pandemic 2019.

According to Brian Yarbrough, consumer discretionary analyst at Edward Jones, the earnings came in over projections but were still “a little light.” Foreign exchange rates and the strength of the U.S. dollar, as well as headwinds in China and air-freight costs, were to blame.

“[Tapestry] is doing a great job controlling the things they can control,” he said. During the earnings period, such strategic moves included closing underperforming stores, significantly reducing SKU counts to achieve a more focused product assortment and decrease clearance merchandise, and remaining focused on cost savings while putting money behind marketing.

Yarbrough said brands in the “aspirational luxury” market, which include Coach and Kate Spade, as well as Capri Holdings-owned Michael Kors, among others, have come to realize that, instead of operating to meet huge sales targets, they should focus on profitability and putting the right product in the marketplace. At the same time, they’ve moved away from discounting, which “only tarnishes the brand,” he said. The result has been a much healthier, more rational, growing marketplace.

For Tapestry, Inc.’s brands, recent payoffs have included attracting and retaining new, young customers. And, Yarbrough said, he sees great opportunity for Coach and Kate Spade when the China market picks up.

In the meantime, fans of Tapestry brands can expect to see more changes. As “the price gap between [aspirational luxury] and luxury players has never been larger,” Yarbrough said, he expects that Coach, in particular, will further raise its prices soon.