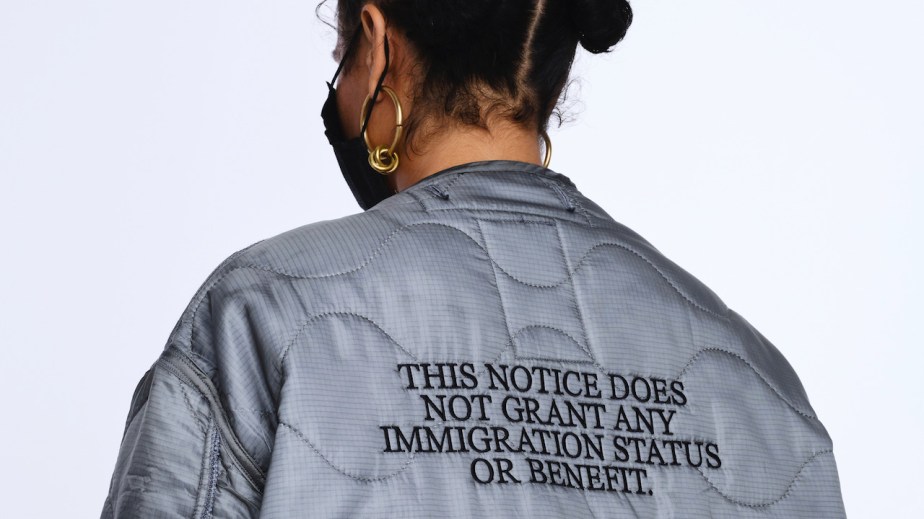 Fashion activism in 2020: How brands are fighting for immigrants’ rights

Two years ago, Paula-Andrea, who prefers to go by her first name only, was flying to San Francisco for work, anxiously awaiting the pat-down she knew she’d receive from TSA. Navigating airport security had become nerve-wracking for the 28-year-old DACA recipient. This was not only because of her status, but also because of two words that were imprinted on her gray sweatshirt: visa issues.

“I’m going through TSA and this woman [notices what I’m wearing] and says, ‘Oh, visa issues. My mom has visa issues,’ and she starts telling me her mom’s story while she’s patting me down,” Paula-Andrea said. “Then I get on my flight and the stewardess comes over, brings me a drink, and starts talking to me about her own visa issues and her journey because she migrated from Peru.”

Paula-Andrea created her brand Visa Issues out of frustration with her status and the jarring language of immigration notices. Fleeing Cali, Colombia after the Pablo Escobar era, she emigrated to the United States at 11 years old and didn’t learn until she was applying for college that her father brought her here with unauthorized documents. Now a 30-year-old photographer living in Brooklyn, Paula-Andrea has amplified a topic that was unspoken in her family and was snubbed in recent presidential debates.

From the “Green Card Lottery” military jacket to tie-dye shirts indicating “the emotional unrest visa issues can bring,” Paula-Andrea’s brand marries minimalist streetwear and politics. Using muted tones inspired by her own Employment Authorization ID, she places the brand’s logo “on the heart, present, heavy and jarring.” The backs of pieces are adorned with a phrase always located atop Homeland Security forms: “This notice does not grant any immigration status or benefits.”

After creating her first sweatshirt two years prior, what inspired Paula-Andrea to finally launch her brand was the Black Lives Matter movement.

Paula-Andrea said, “I’ve struggled so much with being an Afro-Latina, not having an identity in this country and not truly understanding the system that I’m forced to be a part of. When the Black Lives Matter movement started about six years ago, something really resonated with me, but I didn’t know what. When the pandemic began and George Floyd was killed, that set off so much in me.”

Though Visa Issues addresses immigrant rights, a perennial issue, many brands have latched onto activism in the Trump era. Aside from climate activism protests at Fashion Week in September 2020, Patagonia launched a limited-edition collection of shorts with subtle tags reading, “Vote the Assholes Out.” And in 2017, Slow Factory launched a line of scarves speaking directly against Trump policies.

“[We] launched a ‘Banned scarf’ showing a NASA image of Middle-East North Africa with the words ‘Banned’ crossed out on it. The scarf was accompanied by a flight jacket with the first amendment written in Arabic on the back and in English inside. Both items were featured as part of the Contemporary Muslim Fashions exhibition, that is now on view at the Cooper Hewitt, and both were a commentary on the Muslim ban,” said Céline Semaan, executive director of Slow Factory.

Evident in the commodification of Black Lives Matter and Pride apparel, clothing lines centered around social justice appear to be the latest fad. Semaan said risks still exist for Black, brown and Indigenous designers who are vocal in situations of injustice and that a lot of work lies ahead for the fashion industry, which has been built on “exploitation of the Earth and the Global South.”

To safely promote her brand amid Covid-19, Paula-Andrea relies on social media, including paid posts on Instagram, as well as word of mouth and “Visa Issues” stickers she posts throughout Brooklyn’s Bed-Stuy neighborhood.

Currently, Visa Issues has an Instagram highlights section titled “Request Pending,” featuring details on the difficulties Paula-Andrea has had in attempting to promote her brand on the platform.

“This account often gets reported and my ads are rarely approved,” one post reads. “If they are, it’s due to an appeal process. The irony is baffling. I have to appeal for my right to be here.” According to notifications from Instagram, certain ads by the brand are not approved, “Because it asks a direct question to, or makes an assumption about a user’s personal attributes (ex. “Don’t let a cold get you down” or “Are you a cancer survivor?”). This type of language can feel like an invasion of a person’s privacy, which is something we strive to protect.”

Paula-Andrea said she has encountered hostility while wearing the clothes, has seen Trump 2020 stickers plastered on top of hers and has received accusations of exploitation on Instagram.

“Because it spoke about the police brutality, prior to becoming a big conversation in the fashion industry, nobody wanted to buy from him and he almost lost his brand,” she said. “We’ve seen a lot of brands come out with these initiatives to support Black entrepreneurs and Black creatives and, with all due respect, a lot of it is performative.”

Regardless, Paula-Andrea said she hopes the current movement isn’t ephemeral. Instead, she wants it to spark an ongoing conversation that addresses interconnecting oppression, and allows immigrants and anyone affected by these issues to feel safe telling their story.

“I tried to use this sweatshirt in an angry way. But I realized that it was so much bigger than my anger. I want to give agency to folks like me, who, for so long, couldn’t speak about this and still can’t,” Paula-Andrea said.