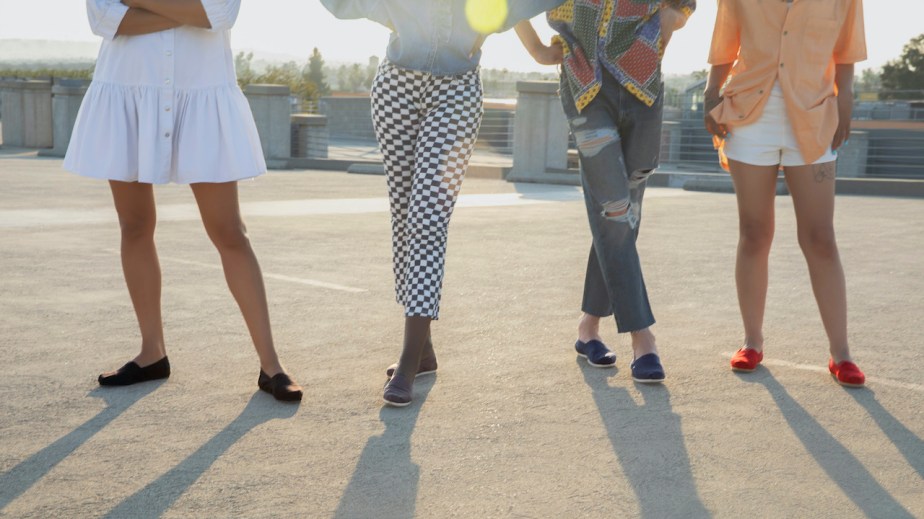 As more brands work to win the attention of the conscious consumer, Toms, which has become synonymous with the charitable one-for-one business model, is changing course.

On Tuesday, 15-year-old Toms announced a 360-degree company refresh encompassing its products, its branding and its social impact strategy. Most notably: It will no longer give away a pair of shoes for each pair purchased.

Toms pioneered the one-for-one model, which has since been adopted by DTC brands including Bombas and Warby Parker, among others. Moving forward, it will instead donate one-third of its annual net profits to grassroots organizations focused on three pillars: fostering mental health, ending gun violence, and creating access to work and educational opportunities for minority groups.

According to brand executives, the pivot was fueled by research on the current values of Gen-Z and young millennial consumers.

“The focus is: How do we become most relevant to Gen Z?” said Ian Stewart, CMO of Toms. “And, at the same time: How can we become more nimble and flexible to be able to address the changing times, which is what Gen Z expects brands to do?”

Out of the gate, Toms is partnering with 10 organizations that align with Gen Z’s values, including Brave Trails, dedicated to developing LGBTQ+ future leaders, and Cities United, focused on reducing homicides and shootings among young Black men. Most of the organizations are based in its headquarters of L.A., while others are in Oakland and New York.

Toms’ focus on U.S. organizations is new, driven by young consumers’ connection to ”hyper-local communities,” said Amy Smith, Toms’ chief strategy and impact officer. And the selection of organizations the company is supporting is set to remain streamlined.

“We had hundreds of shoe giving partners, and that’s too much to manage,” she said. She added that though its partners will rotate, Toms wants to “build deeper, longer-lasting partnerships” with organizations to best learn and fulfill their needs.

For Toms, the time is ripe for rebuilding. The company was in trouble even before the pandemic, facing a debt of $300 million in late 2019 that led to creditors taking it over; it switched hands from private equity firm Bain Capital and founder Blake Mycoskie to Jeffries Financial Group, Nexus Capital Management and Brookfield Asset Management. Bain had taken a 50% stake in the company in 2014, valuing it at $625 million.

In June 2020, when asked about the strain of the one-for-one model on the company mid-pandemic, Smith said, “It’s not easy.… This is where the rubber meets the road, where brands that are purpose-driven are really tested.”

Smith drove the “straightforward consumer insights” studies that shed light on the discrepancies between Toms’ focus and Gen Z’s values. That included collaborating on studies with outside companies to define who the Toms customer is and what they care about. That information informed one-on-one interviews with Gen-Z shoppers. They were asked to weigh in on images showing Toms product styled versus unstyled, for example, as well as on the one-for-one business model versus the new one-third-of-profits concept.

CEO Magnus Wedhammar, hired in January 2020 after stints at Sanuk and Converse, said he thought Smith was “crazy” to suggest the pivot, considering the bulk of the company’s equity is in its one-for-one model. But, he said, the consumer insights on Gen Z’s values sold him.

“I’m proud to be part of a brand that’s impacted 100 million lives [with its original model],” he said. “But I’m also proud to help write this chapter two of the Toms saga.”

To communicate the changes, the brand is relying on PR via fashion and trade media. It’s also done some “major seeding”  to micro-influencers via gift boxes including its signature Alpargata shoes in a new black-and-white colorway, said Stewart. An influencer program focused on micro-influencers is new for the brand, which had formerly focused on lower funnel, performance marketing to drive conversion on its e-commerce site.

“Bringing new eyeballs in is something we haven’t been doing for the longest time,” said Stewart “But the [brand’s] new owners have stressed the importance of having a fully stacked funnel, so we’ll be bringing that to life.”

There will also be a “big deployment of digital media,” primarily via social channels including Instagram, TikTok and YouTube, he said. The brand has never had a TikTok account — it plans to “partner into” the platform via influencers, rather than attempt to steer its own presence.

According to Smith, the giving update isn’t likely to turn off existing Toms customers. Brand-led research showed that they care more that the brand positively impacts the world than they do that it donates shoes.

For its new branding, the company linked with Red Antler, the Brooklyn-based agency behind the clean aesthetics of direct-to-consumer brands including Casper and Allbirds. “We said, ‘We’re a startup, in that we’re starting from the beginning,’” said Stewart. Among the updates the agency implemented were adding color and “modernity,” he said. Toms’ all-new website and corresponding social media posts reflecting the changes went live on April 1. “Real people” who are using their personal platforms to drive social change, and who also represent youthfulness and diversity, are featured in place of traditional models.

Along with ensuring “fashionable accuracy” in marketing to best appeal to Gen Z, Wedhammar said the company will be prioritizing product innovation, starting with “pushing the boundaries” of what the Alpargata shoe can be.

“How do we sneaker-ize the Alpargata? How do we slipper-ize it? We have a tremendous opportunity to extend and iterate on our core proposition,” he said. In a few months, the brand will launch a version of the Alpargata named the Mallow, designed with Gen Z in mind. It will feature exaggerated details including a larger logo and a thicker sole. External designers from Wedhammar’s past workplaces are collaborating with Toms’ internal team and bringing “fresh eyes” to the product design, he said.

The company will also be streamlining its focus categories to shoes and eyewear, expanding to adjacent categories only if the right partner is on board. Earlier this year, it signed a sock licensing deal with Future Stitch. For fall 2021, it’s set to debut a Unity shoe collection supporting the LGBTQ+ community, as well as footwear collaborations with Paper Source and West Elm.

“I can see a future where we’re doing meaningful business in categories beyond accessories,” said Wedhammar.

But for now, he said the company is on the right track. It’s now doing 50% of its business through Toms.com, and the site saw its best sales year to date in 2020.

“We’re looking at 2021 as the year we’re going to return to growth,” he said. “We’ve stabilized the business — we’re actually looking at delivering double-digit growth this year. We’re going to continue to nurture and grow our current consumer base, while also introducing Toms to the next generation of consumers.”

In the months ahead, Toms will extend the rebrand to the look and feel of the five stores it’s kept open in strategic locations including Austin, Texas and Abbot Kinney in Los Angeles. As for its retail partners, including Macy’s and DSW, “We’ll make sure they’re doing as good of a job telling our story as we’re doing in our own channels,” Wedhammar said.