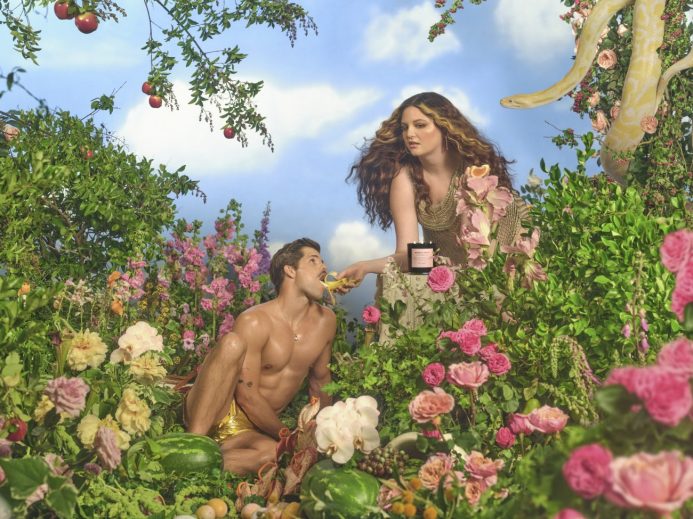 Though fragrance is not inherently gendered, it has been marketed as such for most of our lifetimes. But Boy Smells is part of a new school of queer-owned brands seeking to break the binary. For Pride, the brand released a new campaign called “Nurture Your Nature” on June 8. It stars actor and comedian Megan Stalter alongside actor Charlie Carver, known for roles in “The Batman” and “The Boys in the Band.” Stalter is the breakout star of “Hacks,” where she plays Kayla, a hilarious, incompetent and yet somehow lovable assistant.

To mark the campaign, the brand released a new candle scented to match its fine fragrance Marble Fruit. Fifteen percent of sales from the Marble Fruit collection in June and July will be donated to nonprofit GLSEN, which is fighting against anti-LGBT legislation targeting youth in schools. The brand’s minimum donation will be $50,000.

We sat down with Stalter to discuss why she chose to work with Boy Smells, why she wears perfume to bed and what she thinks Pride smells like.

Why did you want to be involved in this campaign?

“I wanted to because it was very cool and queer and gay. … But the other thing is, I really do love the products. I didn’t just do it for this, but I did get a free perfume that smells amazing. I can’t stop wearing it.

I actually sprayed it on before bed, which is psychotic. It feels, like, sexual to spray perfume on yourself when you’re going to bed. I feel like a woman who’s left her husband and is in a fur robe. When you smell your favorite candles, sometimes you are kind of like, ‘I wish that it was on me,’ or, ‘I wish I had a perfume or lotion that smelled like that.’ And with Marble Fruit, you can do that.

[Boy Smells] candles are great. I had already been a fan of them. I I saw a comedian posts about them a long time ago — I can’t remember who — and the name caught me. And then I got a candle and loved it.”

“Pride is about being yourself fully and then also accepting everyone, and that reminds me of the feeling when you’re at a close friend’s party, where it’s in someone’s living room and everyone’s sitting on the floor laughing. The smell would be like candles that have been burning like all night, and then champagne and then maybe you guys have fruit out and maybe you have like a big cake — the smell of all that together.”

What would you want your partner to smell like?

“Clean and fresh — like they just took a shower, but all the time. Also, my favorite smell is sunscreen, so the smell of sunscreen combined with, like, chlorine in a pool. If my partner could smell like that at all times, like a lifeguard, that’d be cool.”

There’s a “slap a rainbow on it” tendency of brands during Pride Month. What about this campaigns felt authentic?

“I feel like [Boy Smells] is always supportive of the queer community; I know them as a queer business. I didn’t think, ‘Why is Boy Smells doing that?’

If a company that’s never done anything throughout the year to support the community, and then when Pride comes around, they’re just like, ‘Yes, gay, queen, slay, rainbow!’ … it doesn’t feel real and it feels like a joke. We, of course, want to feel supported by companies and businesses, but what it feels like is that they just want to make money off of us.”

What are you doing for Pride?

“I’m going to see some of my best friends in Chicago. That’s celebrating Pride, in a way [laughs]: bisexual representation to my straight girlfriends. Pride’s about being yourself and self-acceptance and love — I celebrate Pride all year long. And I do get excited when [I] see someone celebrating Pride Month [in a way] that’s true and authentic. If I was here [in L.A.], I would go to the parades and stuff.”

What else makes a brand’s Pride-focused initiatives read as authentic?

“Just representation, right? If you’re seeing people who look like the people you know in real life and love, that’s so important. And when you see a company that has a bunch of cis white people representing their company, it just leaves a bad taste in your mouth when Pride comes around and they do a whole big Pride campaign. … It’s [important that they prioritize] representation all year round and are supportive of the queer community.”

The campaign video you made with Boy Smells is so funny. Were you ad-libbing?

“The video kills me because it’s so sexy and the things we’re saying are so funny. We did ad-lib a lot. They prompted me to say a lot of different things. The crazy add-ins were probably me. And the cool, important things they told me to say, for sure. On ‘Hacks,’ we get the lines. But then [the show runners] Paul [W. Downs], Lucia [Aniello] and Jen [Statsky] are so amazing at being like, ‘Oh, if you want to say something crazy, go ahead,’ or ‘Let’s do a wild run.’ We’ve always been able to add stuff, which has been a dream.

We filmed a lot that day, and it was the most fun day of my life — the makeup and the hair, and the costumes, and the set, and the snake, Popcorn. I hate snakes, and we really bonded that day. I felt like Britney [Spears].

You know how in ‘Twilight,’ once they get bitten, they look like an even better version of themselves? Their hair looks better and their skin is actually glowing — there’s something different. That’s how I felt all day. I was like, ‘OK, this feels elevated … but this is who I am inside.”