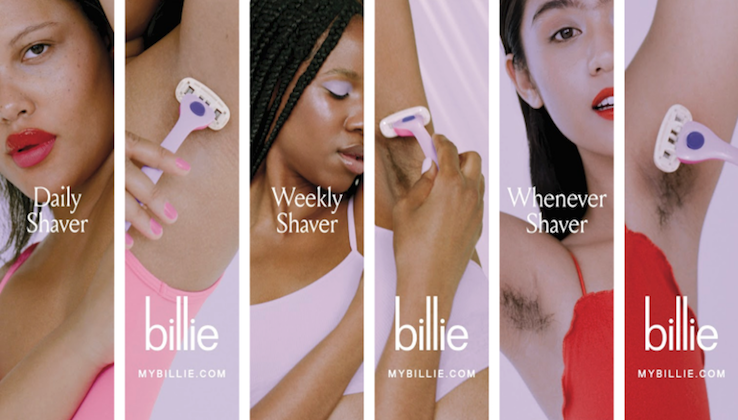 Prior to 2016, New York City subway ads had been the home of questionable plastic surgery providers and supplement companies offering quick fixes, but in 2018, a variety of beauty and wellness brands have taken to the channel.

Luxury makeup brand Il Makiage, heritage player Olay and direct-to-consumer brands like Hims (and its new brand Hers) and Scentbird are a few examples of brands that have gone there, as are sexual wellness and body-care brands, such as Thinx, Lola, Flamingo and Unbound. On Monday, DTC shaving brand Billie joins the fray, taking over the Williamsburg, Brooklyn, Bedford station subway stop for 28 days. Billie’s 55-poster campaign includes a takeover of any marketable surface within the station, such as advertising beams and turnstiles. For Billie, the year-old brand which received $6 million in seed funding in April, the hope is to cement its position within the women’s shaving category through its campaign, according to Georgina Gooley, co-founder of Billie.

Part of what has fueled the influx of these brands to target the advertising platform can be attributed to an increased competition for brand awareness in the out-of-home advertising space. According to Nielsen, 86 percent of beauty e-commerce channels are controlled by companies outside the 20 biggest cosmetic manufacturers (like L’Oréal or Revlon). Many of these e-commerce-first businesses have grown due to venture-backed funding (according to Pitchbook, U.S.-based beauty companies have raised a record amount of VC funding in 2018 for a total of $812 million and counting), and those companies are spending their ad dollars on the subway.

“[Brands] want to be the first to own an advertising channel and also beat the competition,” said JB Osborne, CEO of creative agency Red Antler, which has worked with Birchbox. “That’s why you’re seeing DTC brands flocking [to the subway] in volume.”

Although it can take months to find an opening for a subway ad, Flamingo, another DTC women’s shaving brand that launched in October, is also currently advertising at the Spring Street subway station and will continue throughout December. Flamingo is also advertising on posters in the Soho and Nolita neighborhoods, and through billboards and bus station ads throughout the city. Both Flamingo and Billie declined to state how much their campaigns cost or how much their respective campaigns comprise of their marketing budgets, but said that the goal is to test out a new advertising channel and see if it lifts sales. Blue Line Media, an outdoor advertising company that handles subway ads, states that ‘station domination’ (like what Billie is doing) ranges between $25,000 and $75,000 or more, per station, for every four-week period.

“As we have grown in scale, [our marketing budget] has grown significantly, but we don’t want to spend for the sake of spending,” Gooley said. “It all about testing, learning and optimizing.”

Still, it is not well understood how subway advertising affects ROI and brand awareness. None of the brands Glossy spoke with were able to offer metrics, although Flamingo did say “a lot” of its customers reference its current subway campaign. Digital ads offer more tangible ways to directly track performance.

“If you’re bootstrapping or simply running a traditional company, you need to generate a return directly off your investment,” said Brady Donnelly, executive director of consumer experience at creative agency Fig. “[Subway ads] are only an option when an immediate return on your investment is not the primary driver of your media buying strategy.”