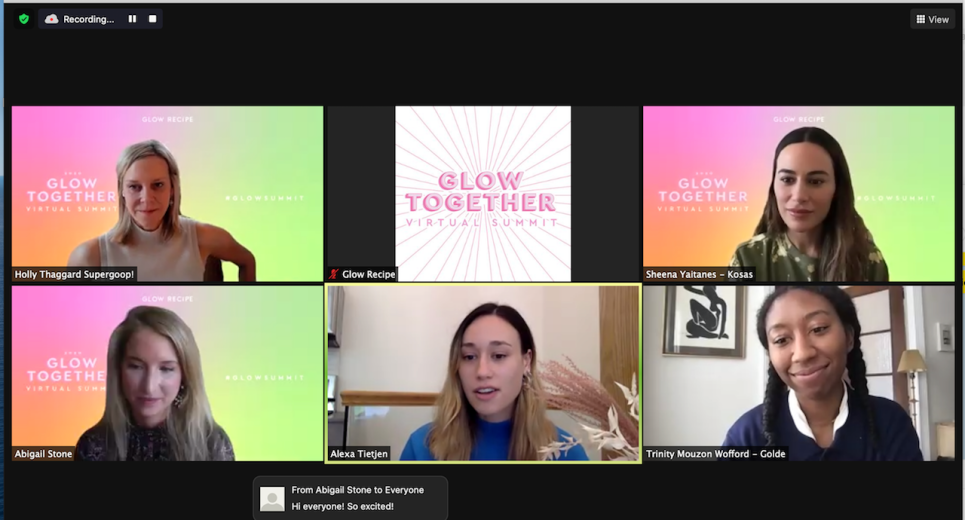 Why virtual beauty summits could stick around beyond the pandemic

At this time last year, the beauty and wellness summit was having a moment. Witnessing the success of Goop’s summit over the years, a growing legion of beauty brands were in the planning processes for their own daylong events. That plan, of course, radically changed, causing brands to embrace the virtual summit.

From January 11-25, Net-a-Porter hosted its first ever beauty festival completely online, bringing in a range of speakers daily like Dr. Barbara Sturm, Tina Craig and Tata Harper on its site, Instagram and TikTok. It follows other brands that have opted instead for day-long events during the pandemic, strategizing the best ways to keep Zoom-fatigued audiences engaged. Skin-care label Glow Recipe, for example, held a summit online in November, while Smashbox held its daylong event showcasing female Latinx entrepreneurs in December.

Glow Recipe’s November 14 Glow Together Virtual Summit took the place of an in-person summit the brand had originally been planning to hold in New York in 2020. It had been slated to be the brand’s first major summit, following its smaller beauty and wellness-themed in-person events and pop-ups it had been hosting since since 2017.

“Because education is just so tied together with our brand and how we put out content, that is always top of mind whenever we’re doing IRL activations,” said Christine Chang, co-founder and co-CEO of Glow Recipe. “That carried over to this virtual summit.”

The Glow Together event featured a daylong schedule of talks with beauty industry figures including Angel Merino and the founders of Supergoop, Kosas and Olive & June, among other brand founders. It also featured wellness content including yoga and lymphatic massage classes. Users who purchased its $45 Tier 1 tickets received a swag bag with products by Glow Recipe and participating brands.

A major benefit of summits going virtual is increased capacity without geographic limits. The Glow Recipe summit sold 700 tickets in total, had 585 attendees in total from around the world and sold out of its limited number of 500 Tier 1 tickets within one day of going on sale.

Other beauty and wellness events have become more accessible, as well, due to the virtual format. In Goop Health dramatically lowered its ticket prices last year when it moved online.

According to Chang, these brand summits are “reflective of how brands dialogue now with their customers. You don’t talk [at] your customers anymore; you talk with your customers.”

The brand had begun planning Jefacon in November 2019, intending to host it as an IRL convention for female entrepreneurs. The switch to virtual changed the scope of the event, said Kimberly Villatoro, vp of marketing and North America brand lead for Smashbox. The company had opened an event space on its L.A. campus in January 2020, and launched its Spotlight event series with talks by creators, creatives and entrepreneurs in February 2020 — it had a short run in person before the pandemic hit.

“We would have had Jefacon at the studio and maybe been able to host 200-300 people, and instead we were able to go virtual and really make it so much bigger and broader,” she said. The brand sold a $98 box featuring Smashbox and other brands’ products in conjunction with the event, but made tickets to the event itself free. The event had over 1,000 registrants with 700 women tuning in at a time.

To keep visitors engaged, “it wasn’t a typical Zoom,” said Villatoro. Instead, the brand worked with marketing agency BMF to create a microsite with a photo booth, Spotify playlists and a chat feature for networking to encourage engagement.

With vaccines generating hope about a possible post-pandemic world, brands have become more open to the idea of virtual events in the future.

The pandemic “has absolutely shifted our thinking” with regard to events, said Villatoro. “Prior to Covid, we always thought of in-person events first. And now, [both formats] are equally important. In our marketing mix going forward, it’s going to be about which events actually deserve being in-person, versus being virtual, because there’s so much that you can achieve virtually if done the right way.”