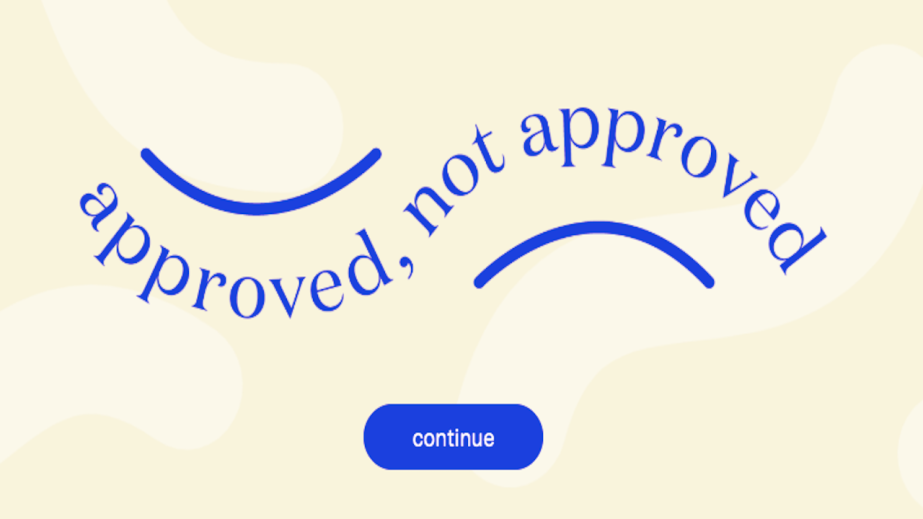 As women’s sexual health and wellness companies continue to hit a wall in their quest to advertise on Facebook and public transit, Unbound Babes and Dame Products hope a new online activation can get social media platforms to change their guidelines.

On Wednesday, the two companies launched a website called Approved, Not Approved, where they have posted a series of ads — some of their own and some from other brands — that have been approved (by those including Hims and Brooklinen) or rejected by the MTA or Facebook. Consumers are prompted to guess which ads have passed and which have not, as a way to illustrate the arbitrary nature of the advertising approval process, said Polly Rodriguez, CEO and co-founder of Unbound Babes.

The brands worked together to create an Instagram account for the project and will use their own social accounts, as well as email subscriber lists, to drive customers to the site. Unbound has 99,000 Instagram followers, while Dame Products has 39,800.

Think your beliefs about what’s “appropriate” line up with advertising gatekeepers? Test the logic – link in bio. #ApprovedNotApproved

Unbound sells vibrators and lubricants, and promotes itself as a personal care and sexual health brand. Both Unbound and Dame Products (which also sells vibrators) have had their ads rejected by the MTA and Facebook, either for being sexually explicit or promoting sexual activity. The main issue the founders have is that while their ads are being rejected for including phallic imagery or promoting sexual pleasure for women — often without even depicting their products in the ads — male sexual wellness brands are running ads on these channels with little difficulty.

For direct-to-consumer startups like Unbound and Dame Products, social media ads are a key customer acquisition tool. Without the ability to advertise on Facebook and other social media channels, these companies struggle to grow. Dame Products’ CEO, Alexandra Fine, said she was able to successfully run some ads on Facebook in 2018. The company saw a three-times return on its ad spend.

“My business has never been as profitable and grown as consistently as when we were running ads on Facebook. It’s the main reason why some investors won’t invest in us — because the main way they are seeing other companies grow is through Facebook, Instagram and some Google ads,” Fine said.

The duo has even gone as far as to draw up new policies so that, in theory, all the companies would need to do is read over the policy and change it how they see fit. One main concern will be whether the two companies will be able to run ads on social media to promote the Approved, Not Approved platform. Dame Products and Unbound have reached out to other brands in the sexual wellness space, including Roman, to promote the site, but declined to share which brands will be joining them in their efforts.

Unbound has faced its own set of issues, the most high profile being with the MTA.

“We were rejected from the subway because our imagery was too phallic, and so we wanted to highlight the ads that have gotten approved that also are incredibly phallic. It was important to highlight the Hims campaign with the penis cactus, but then we also wanted to expand it,” said Rodriguez.

For its part, Dame Products sued the MTA in July after its ads were ultimately rejected. The company had been working with the MTA for several months to get the campaign running, even receiving a green light on certain iterations of the ads. Eventually, the MTA denied the subway ads, citing a recent change in its policy that effectively banned ads for sex toys after Dame Products spent $150,000 on the campaign.

It’s not just sexual wellness brands that have struggled with ads on social media and New York subways. In June, Billie, which sells razors, blades, shave cream and lotions, had portions of its latest paid Facebook ads flagged because it showed women in bikinis with visible body hair. Fitness and wellness company Every Mother had its Facebook ads that showed both pregnant bellies and regular bellies blocked by Facebook. The company helps women with diastasis recti, a condition many childbearing women face.

“Our experience has been that, whenever an image is showing a midriff in a medical way, it would be flagged for ‘Nudity/Sexual Activity.’ Multiple violations of trying to resubmit this ad caused our page to be shut down,” said Allison Rapaport, CEO at Every Mother. “A bathing suit is fine, but a mother’s abdomen to display a medical condition is not. It speaks to an ability to fight the objectivity in women in automated systems and media.”

“We have had open communication with both companies and are always taking input and working to improve where it makes sense. We are working to clarify our policies in this space in the near future,” a spokesperson for Facebook said in an emailed statement. The MTA did not responded to Glossy’s request for comment.