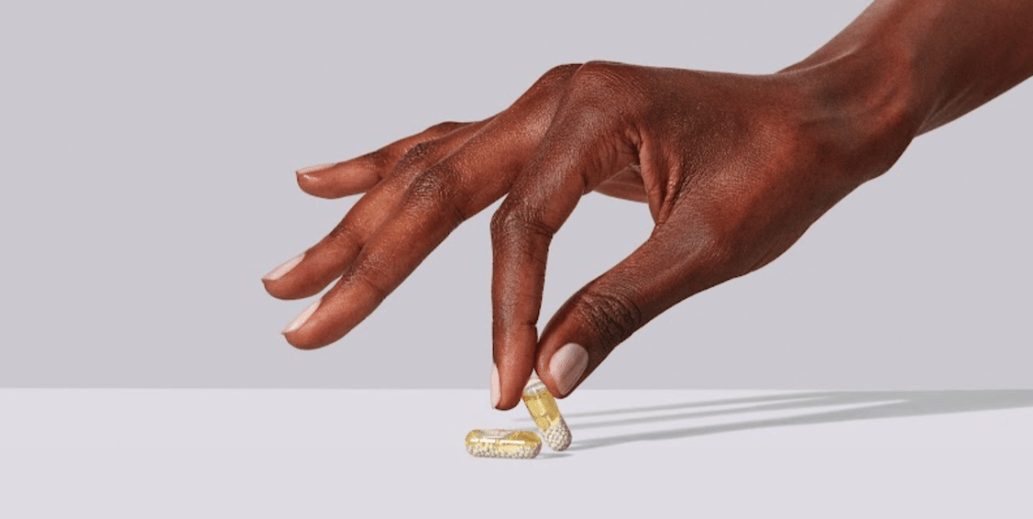 Since its launch in 2016, Ritual has sought to be a better-for-you company selling better-for-you supplements. With a focus on ingredient transparency, Ritual brought this concept home with its clear capsule design, which shows tiny beads suspended in oil. On Tuesday, the brand dove further into its commitments and claims around traceability by adding sustainability to the mix.

In July, Ritual became a B-Corp, signifying the company’s focus on humanism over profit. On Tuesday, Ritual shared its latest goals and approaches to achieving them. By the end of this year, 100% of its ingredients will be traceable, with the supplier and geographic area of the ingredient identified. Additionally, Ritual aims to reach 100% sustainable packaging by 2025 through a mix of post-consumer recycled materials and refillable or recyclable packaging. Currently, 71% of Ritual packaging uses post-consumer recycled materials. Lastly, Ritual will attempt to have net zero emissions by 2030. The first step is to map the brand’s carbon footprint and determine its most significant contributors, which will conclude by the end of 2022. Following this, the brand will create a plan to reduce its carbon. Lindsay Dahl, chief impact officer at Ritual, said the goal is to reduce emissions and hit science-based targets, offsetting remaining carbon contributors via carbon credits “as a last resort.”

All of this is displayed on a new Made Traceable landing page, which debuted on Tuesday on Ritual’s e-commerce website. It also shares what traceability means to the company and publicly defines its sustainability and climate goals.

“Transparency is great and something that consumers want. But traceability is more than that. We think of traceability as transparency with receipts,” said Dahl. “[The landing page] is a way for us to show the receipts, in one central place for people to be able to see what we stand for and how we think about formulating products. It also [includes] some of the fine print and the complexities of sourcing.”

Indeed, traceability has gained traction as a better and deeper version of transparency. If clean beauty helped spur the beauty industry to show more information about its ingredients, such as what goes into the catchall term “fragrance,” traceability serves as the second generation of this ethical-minded approach. Skin-care brand Versed aligned its sustainability goals with the UN’s Sustainable Development Goals (SDGs), establishing transparency around environmental impacts on a product-by-product level and tracing the carbon contributions from each item. In 2020, Aveda introduced blockchain technology into its vanilla supply chain to ensure the quality and authenticity of one of the world’s most expensive and contaminated raw materials.

Ritual earned more than $100 million in sales in 2021, said Kat Schneider, founder and CEO of Ritual. She declined to share the number of subscribers Ritual has. Ritual joined Amazon in July and earned over $1 million in sales on the platform in the first 60-days. The supplements company will also join an undisclosed exclusive brick-and-mortar retail partner in October.

Since 2019, Ritual has grown and invested in major projects. In the last three years, it launched gut health and protein supplements. Ritual also invested in clinical studies, costing from $100,000 to over $1 million. Schneider said several ingredient suppliers have contributed financially to these clinical studies. The first study for Ritual’s flagship Essential for Women multivitamin indicated the product increased vitamin D and omega-3 DHA levels in 12 weeks. Currently, Ritual is engaging in five clinical trials for undisclosed ingredients and products.

In 2023, Ritual will have a top-funnel marketing campaign regarding the Made Traceable landing page, said Schneider.