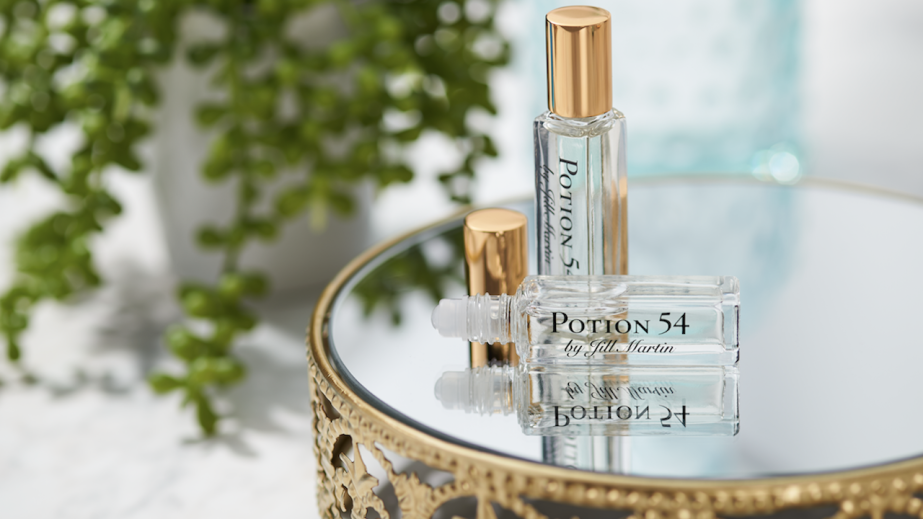 ‘Proprietary brands are a big strategic focus for us:’ QVC launches private-label fragrance

Shortly after releasing its Carmindy Beauty line with makeup artist Carmindy Bowyer in September, QVC is launching a fragrance brand with television personality and sportscaster Jill Martin dubbed Potion 54 on Friday. It was co-created with manufacturing and product strategy firm Batallure Beauty. First to roll out is a set of two fragrance rollerballs retailing for $29.75. In the first quarter of 2020, the assortment will expand to include a body wash, a body mist and a body lotion.

“As we think about how to build differentiation, proprietary brands are a big strategic focus for us. There are areas where we think we have the right to win, and the way to do that is to bring storytellers to those white spaces,” said Rob Robillard, vp of integrated beauty at QVC and HSN.

QVC would not disclose how many private-label beauty brands are currently being developed within its formalized partnership with Batallure Beauty, but Potion 54 is its second. Neither company would share the terms of the agreement. Outside of QVC, Balatullure incubated Christian Louboutin Beauté in 2013 and launched direct-to-consumer fragrance brand Henry Rose with Michelle Pfeiffer in April.

Fragrance is an “under-penetrated” area for QVC, said Robillard, and one that has thus far, been dominated by designer houses like Burberry and Guerlain. Niche perfumes continue to be a growth area in the beauty industry, seeing 13% year-on-year growth, thus Potion 54 is a smart way for QVC to participate in the trend. According to NPD data, the designer fragrance segment saw just 3% year-over-year growth as of August 2019.

Beauty makes up 18% of total QVC sales, and last year, the business’s overall revenue increased to $9 billion, of Quarate Retail Group’s $14 billion. QVC would not disclose its percentage of fragrance sales, only sharing that it sells 186 scents on QVC.com. Within skin care, it sells 428 moisturizers and 960 treatments. Nest Fragrances has been a particular highlight for QVC, said Robillard, and it recently debuted fragrance brand Ellis Brooklyn within its new clean category.

“Because of the trend toward discovery through storytellers and digital channels, QVC is more relevant than ever,” said Robin Burns-McNeill, chairman and co-founder of Batallure Beauty. “Department stores used to anchor fragrance brands, and designer fragrances were so important because their names told the whole story. Today, customers are discerning about who is the face of a brand versus who is the creator of a brand, and they want creators.”

Martin may seem like an unusual choice for QVC, when other brand incubators are banking on millennial and Gen-Z names to round out their product portfolios. Beach House Group released its Florence By Mills brand in partnership with Millie Bobby Brown in August. However, QVC’s 8.3 million viewers are typically 35 to 64 years old. Martin is 43 and has had a relationship with QVC since 2013, with her fashion and accessories line G.I.L.I. In May, that line expanded into the home segment.

“I did not set out to build a beauty brand, but I know women trust me and have been loyal to the lifestyle brand I have been creating,” said Martin. She also said she debuted rollerballs first because of their ability to be on-the-go, which works with her customers’ schedules.

Martin, who has a built-in social following of 470,000 and makes regular appearances on “The Today Show,” will appear on QVC live on Friday. Potion 54 products will be available on QVC.com simultaneously. This in contrast to Carmindy Beauty, which was first sold online in August, prior to an on-air appearance by Bowyer on QVC a month later. Based on the response, QVC deemed her a brand founder that could be built into a mega-influencer. The line’s tube mascara has been the brand’s best-seller, and Robillard credited its success to QVC not selling any other mascara that offered easy removal.

“We have great national brands within beauty at QVC. Proprietary brands are a small percentage of our business, but an important one,” said Robillard.