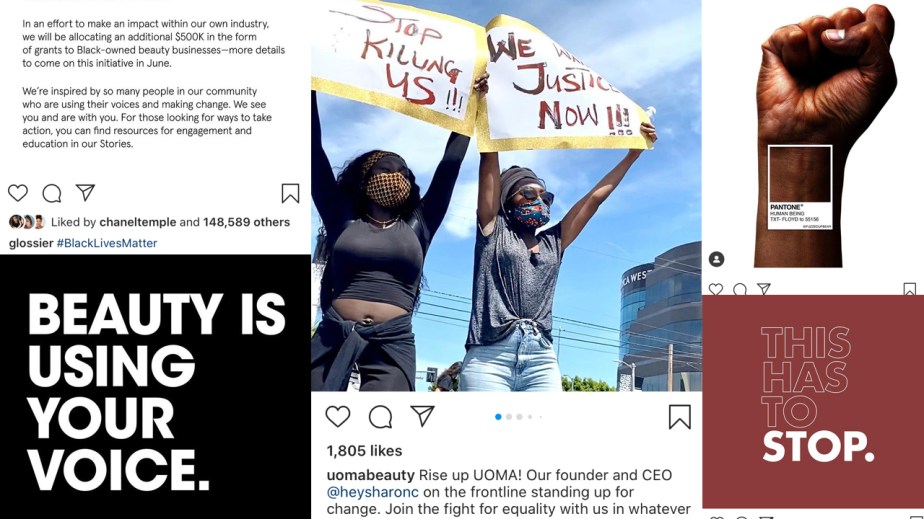 Apart from Nike, corporate brands speaking out in support of the Black Lives Matter movement have been few and far between — that is, until now.

As protests have swept the U.S. in response to the killings of George Floyd, Breonna Taylor and Ahmaud Arbery, a wave of beauty brands has posted statements in support of the Black Lives Matter movement. Appearing on brands’ feeds since late last week, posts have ranged from general condemnations of racism to direct mentions of Black Lives Matter and calls for justice for George Floyd. Brand initiatives have included pledging donations and offering up resources on activism, as companies work to avoid being seen as engaging in performative wokeness.

While diversity has continued to gain momentum in the beauty industry, the current level of support being shown by mainstream consumer brands explicitly for Black Lives Matter is unprecedented. Nike’s 2018 ad featuring Colin Kaepernick was the first major brand campaign to take on the issue publicly, and many of the world’s largest consumer brands have stayed silent on the topic of racially motivated police violence.

According to Desiree Reid, a multicultural marketing expert and the founder and president of beauty consultancy Desiree Reid & Co., brands had not addressed this issue “in such a direct way” prior to this week. “Nike led the way, and brands have realized who their customers are and that standing with them matters. It cannot be just about consumerism.”

On Saturday evening, Fenty Beauty reposted a statement on its Instagram account from founder Rihanna featuring a photo of George Floyd, stating, “For the last few days, the magnitude of devastation, anger, sadness I’ve felt has been overwhelming to say the least!” as well as, “The look of enticement, the pure joy and climax on the face of this bigot, murderer, thug, pig, bum, Derek Chauvin, haunts me!!”

Glossier released a statement on Saturday evening, stating that it will be donating a total of $1 million: $500,000 to civil liberties organizations including Black Lives Matter and the NAACP, as well as $500,000 to black-owned beauty businesses. This is the largest beauty brand donation announced so far, and is on par with what some of the largest tech companies, like Intel, are pledging.

“We stand in solidarity with the fight against systemic racism, white supremacy and the historic oppression of the black community. Black Lives Matter,” said the Glossier statement.

Beauty companies with black founders have been supporting activism as well, and some have been vocal about the issue prior to this week. SheaMoisture hosted an Instagram Live discussion on Sunday evening with legal, mental health and political experts, while Beauty Bakerie posted to its Instagram Stories with comprehensive information on how to support the movement. Uoma Beauty posted an image to its Instagram account of its founder and CEO, Sharon Chuter, participating in the protests over the weekend. In another post, the company stated, “We call for all to stand in solidarity and speak up against the terrible injustices that have been perpetuated for hundreds of years against minorities.” SheaMoisture has spoken out on this issue in the past, posting in memory of Trayvon Martin on February 26, the date he was killed.

Earlier this week, beauty influencer Jackie Aina posted a statement on her Instagram stories in which she called out brands that had not yet spoken out. “There are a lot of brands who love capitalizing on black culture, black music, black aesthetic, but are dead silent when it comes to talking about black issues and black struggles in our community,” she said, adding that brands need to “say something when black people are being brutally murdered by cops” and  “donate to families affected.”

Brands owned by the world’s largest beauty conglomerates have been releasing statements one by one since the weekend. For Estée Lauder brands, MAC Cosmetics, Glamglow, La Mer, Smashbox Cosmetics and Too Faced were the first to release statements on their Instagram accounts. They were followed by Estée Lauder, Becca Cosmetics, Clinique, Bobbi Brown and other brands in the portfolio.

Online commenters have expected quick reactions from brands, expressing disappointment to those that have not spoken out yet. L’Oréal Group’s Lancôme, for example, released a statement Monday afternoon after receiving comments over the weekend and Monday asking them to do so. L’Oréal brands Urban Decay and NYX posted over the weekend; others in the portfolio including L’Oréal Paris spoke out publicly as of Monday. L’Oréal Paris has received much criticism in the comments of its post after model Munroe Bergdorf posted about the brand on her Instagram, saying it had dropped her from a 2017 campaign for “speaking out against racism and white supremacy.”

RMS Beauty also faced criticism over the weekend, when its response on why it had not yet posted on the issue was, “In all fairness, we did not know there is an expectation date for showing support and our team will be in the office Monday 9:00 EST.” Following criticisms from commenters angry over the tone of response, the brand posted an apology on Monday and a statement that it will be donating a total of $75,000 to Black Lives Matter, the NAACP and The Bail Project. It also hid its comments and removed the ability to comment.

According to Reid, brands should speak out quickly, because “they have to be seen as taking the lead, not following a trend.” She noted that response time may be slow because “this is new territory for brands. Someone has to make that decision, and it should come from upper management, who may be too far removed from their customer base,” she said.

And a statement alone is not enough. Online commenters are demanding explicit mentions from brands about police violence and tangible contributions. La Mer’s post, stating “We value each member of our community,” did not explicitly give support for Black Lives Matter and received criticism for its vagueness. The wording was later changed to, “We stand with the Black community as allies, friends and family.⁣” One user said it was a “good attempt to address the situation without offending anyone, but it’s not enough.” A MAC Cosmetics’ Instagram post reading “we stand with and support you” drove comments asking whether the brand would be donating to charities or undertaking other initiatives. MAC replied, “We know one post on social media isn’t enough. We will be taking action and announcing how we’ll support this week.”

In addition to Glossier, as of Monday, over 60 beauty brands have pledged financial support for organizations including Black Lives Matter, the Minnesota Freedom Fund and the NAACP, according to a growing checklist of brands being compiled by industry watchdog account Estée Laundry.

Examples include Biossance, which will be donating $100,000 to the Minnesota Freedom Fund and Black Lives Matter, and Deciem, which will be donating $100,000 to the NAACP Legal Defense & Educational Fund and Black Lives Matter. SheaMoisture is launching a $100,000 investment that will be provided to five activists working toward social change. Additional brands that have released dollar amounts for donations include Sunday Riley ($50,000), E.l.f. Beauty ($25,000), Kosas ($20,000), Cocokind ($10,000), Farmacy ($10,000), The Body Shop ($10,000) and Glow Recipe ($10,000), while Herbivore pledged to donate 100% of its weekend profits to the ACLU, Minnesota Freedom Fund and Black Lives Matter. Other brands announced donations of undisclosed amounts, including NYX, Marc Jacobs Beauty, Revlon, Morphe, KVD, Fourth Ray Beauty, ColourPop, Tatcha and Urban Decay.

“While we haven’t actively talked about this issue before, we felt very strongly that we needed to help support this fight for equality by supporting an organization like Black Visions Collective that has been doing incredible work in the space already,” said Christine Chang, co-founder & co-CEO of Glow Recipe. “Times are changing. It is up to brands to help lead by example, not only in the imagery and values they portray, but also in the actual support they give to actively promote allyship.”

“We feel this conversation shouldn’t begin or end with the response of the unjust treatment and killing of our community members including George Floyd,” said Hilary Lloyd, the vp of marketing and CSR at The Body Shop North America. “In a society in which racist practices are widespread, we are committed to not simply opposing racism, but being actively anti-racist by educating one another and examining how we can accelerate positive action to eliminate injustice, oppression and inequality wherever it exists.”

“Celebrating the beauty of every eye, lip and face is fundamental to our DNA, and as a brand, we decided to donate to Color of Change, a fellow Oakland organization, because of our aligned commitment to diversity and inclusion,” said Tarang Amin, E.l.f. Beauty CEO.

Ulta Beauty released a statement on Saturday, saying that it will be donating to the Equal Justice Initiative and will “continue diversity and inclusion trainings for associates — with a series in response to current events to have honest conversations about privilege, systemic racism and ways to create meaningful change.”

In addition to Fenty Beauty, a part of LMVH’s Kendo, LVMH beauty companies that have been vocal about their support include Sephora, Benefit Cosmetics, Marc Jacobs Beauty and KVD Vegan Beauty.

“To our Black employees: We see you. We know you’re hurting. We are here to support wherever and however we can,” said an open letter from Jean-André Rougeot, the president and CEO of Sephora America. He also addressed stores that had been damaged, stating, “Our stores can always be repaired and reopened.” The brand said it will continue to financially to support organizations that fight for equality and racial justice, to listen to Equity Advisors and to look for ways to improve and evolve its policies and practices.