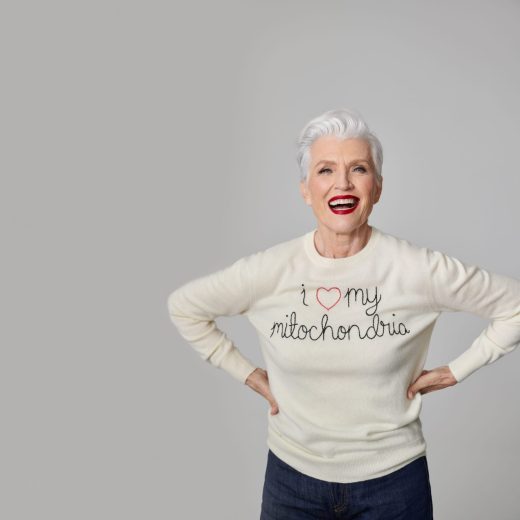 Maye Musk on wellness, her recent move to New York and cutting through the gluten-free noise

Most people know Maye Musk as a model or more recently as Elon Musk’s mom, but what some don’t know is that Musk is also a dietitian, or as she puts it in her Instagram bio a “Dietitian with 2 MS degrees #MyRealJob.” On the platform, the 73-year-old has 477,000 followers. She became a CoverGirl at 69 and when we interviewed her in late September, she told us she was heading to Paris with Dior a few days later. Though she had a certain impact on fashion and beauty, Musk has appeared everywhere from boxes of Special K cereal, to the cover of Time Magazine, to a Beyoncé video. In 2021, she signed with Creative Artists Agency.

Though she is typically skeptical of supplements as many dietitians are, she recently teamed up with Timeline Nutrition, a supplement brand that claims to revitalize the mitochondria. We spoke to Musk about why she believes in this particular supplement (even though she herself is new to trying it), how New York is energizing her and why she’s not a fan of gluten-free everything.

As a dietician, what are your best-kept nutrition tips?
“I had a practice for 45 years — I was seeing people all the time. And I made them plan their meals. Because if you don’t plan, the wheels fall off. You come back [from work], you’re tired, and you haven’t planned your dinner. So, you have to plan it and write it down.”

What’s your best meal-planning advice?
“First of all, lots of fruits and vegetables and then whole grains, good oils, as well as, avocado. I eat flexitarian. So vegetarian at home and meat, fish, or chicken when I go out. It’s also because I’m a bad cook. But the thing is, when I go out, I will get fish or even a steak. Usually, the portions are too large, because it’s America, so then I will take two-thirds home with me and then I have a third the next day, and the next day. So then again, I don’t have to cook, I just have to do the vegetables. Those are the basics that you need.”

Are there any wellness trends you’re either really into or think are crazy right now?
“Ridiculous? Yes. Gluten-free. Gluten is a protein in wheat, rye and barley. But people are saying when they eat a whole pizza, they feel tired, so must be the gluten and I say ‘No, it’s the whole pizza.’ I’ve worked with celiac patients and they have to go gluten-free. I just hear too much nonsense about it, but now people are just tired and they say it’s the gluten.”

You’ve spoken about being skeptical of products in the wellness space. What sold you on this product?
“So first of all, I’m skeptical if there’s a supplement that you don’t know what’s in it because the research hasn’t been done on that supplement. So when, when I was approached for [Timeline Nutrition’s] Mitopure, I saw that the research work was done with Mitopure. And then I also read all the research on Urolithin A, so that I know that it does repair the mitochondria in the cells. When I read all the research I said, ‘Okay, this is looking good.’ But then, the thing I needed to do is meet all the scientists. The scientists are not the ones doing these interviews because scientists are quite shy. And not only that, but they talk science and nobody understands them. And so what dietitians do is take this science and can put it into everyday language.

Even for experts, wellness can be a confusing space. How do you recommend people vet products for themselves? How can you tell if something is trustworthy, or worth trying?
“Well, first of all, they should see a dietitian, and the dietitian will then see what their diet is like, see if they need a supplement. They will get the blood values from the doctor — are they anemic or short on any nutrients, and they will then see if they can fix it with a diet alone. If not, they will then recommend a supplement that they trust.”

Do you have any food recommendations for boosting your energy before you take a product like this?
“Yes, you just need to eat regularly. But you just eat regularly, plan your meals and don’t eat junk food. Because if I had chocolate nearby I’m a goner, and then I just go into a food coma because I can’t stop eating it. We always have our weak points and you have to make sure they’re not nearby. “