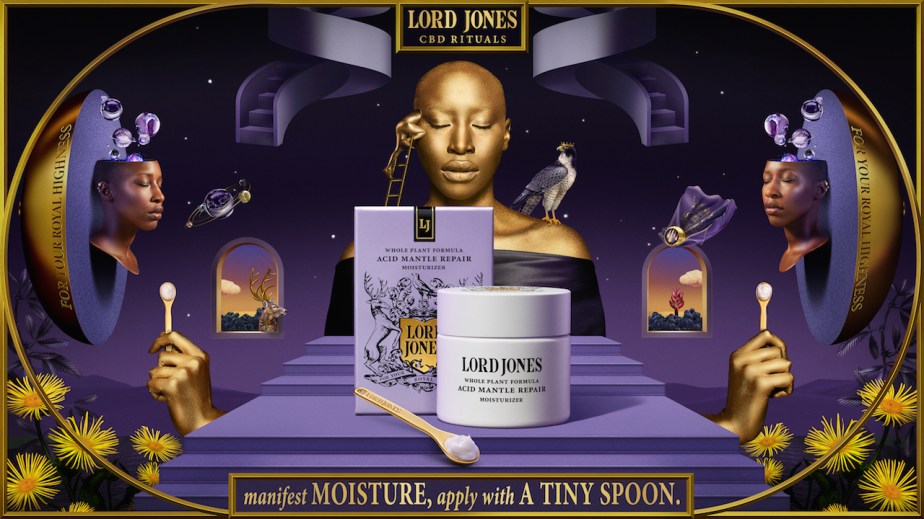 Luxury CBD brand Lord Jones is taking its advertising to television and streaming services, representing a significant development for the CBD industry.

The new campaign, which is the brand’s first TV and streaming launch, is called “A Higher Order.” The brand debuted two ads on Monday across over-the-top streaming platforms and channels including E!, VH1, CNN and HGTV. The video ads and their static image counterparts (which will be shared across social media) are meant to immerse viewers in the experience of using CBD products. One of the commercials is titled “Bathe in Relaxation” and features an Egyptian queen who fakes her own death to enjoy the experience of a Lord Jones CBD bath. The TV spots coincide with the launch of the brand’s new Bump & Smooth CBD Body Serum, but other products like its body lotion, gummies and face oil are also advertised. The brand declined to state its investment or campaign budget, but previous Glossy reporting found that linear TV ads begin at $250,000 and are an upfront cost, while OTT ads require a smaller budget and the cost is broken down monthly.

“Until now, we have never had the opportunity to showcase the heart and soul of the brand as widely as we’re able to do today,” said Summer Frein, gm of Lord Jones and Happy Dance. “The campaign is intended to expand awareness of the brand, but it’s also a moment for the CBD industry. [We can bring attention to] the category and elevate the CBD industry, while differentiating ourselves from anyone else in this space.”

Though CBD advertising can now make its way onto a television or steaming device near you because of the 2018 Farm Bill, the particulars of how and what the CBD industry can advertises are still murky. The legal risks that a broadcaster of CBD ads incur depend on a variety of factors like the nature of the product itself, the claims a product makes and the regulatory viewpoint of the state in which the ad is shown in. In a 2019 statement, the FDA clarified its position on CBD and said its “biggest concern” was the marketing of CBD products that made “unsubstantiated therapeutic claims to prevent, diagnose, treat or cure serious illnesses, but have not received regulatory approvals.” Small CBD brands like cbdMD and pet-focused Paw CBD previously advertised via national broadcast channels. But digital advertising constraints still remain on platforms like Facebook and Google, which caused significant hurdles for CBD brands when retailers closed during the second quarter of 2020.

“While public opinion – and in some instances, even state law – has shifted on all things cannabis, [television] still isn’t there yet,” said Ali Haeri, vp of marketing at advertising agency Steelhouse. “We see a ton of interest from brands looking to run connected TV campaigns for a wide variety of CBD products, but the pushback we’re seeing is from the large publishers or TV networks. They’re just not ready to allow that type of advertising to sit alongside their content.”

In Oct. 2020, the brand co-launched a sub-brand called Happy Dance with actress Kristen Bell, which launched in Ulta in March. In 2019, cannabinoid company Cronos Group acquired Lord Jones for $300 million– $225 million in cash, and the remainder in stock. The roughly equated to 75- to 150-times Lord Jones’ 2018 revenue, according to Barron’s.

Frein said that the campaign’s success will be evaluated on several factors, such as what campaign elements resonate with consumers, in what markets it performs well, and how the brand can modify the marketing mix based on this information. Frein described the current marketing mix as “dipping a toe” into broadcast and OOH advertising.

“We’ve had to chart our own path. Our mission for the brand has been to normalize and de-stigmatize the plant,” said Frein. “CBD [advertising] will continue to grow and you’ll continue to see people [and broadcasters] getting more comfortable.”