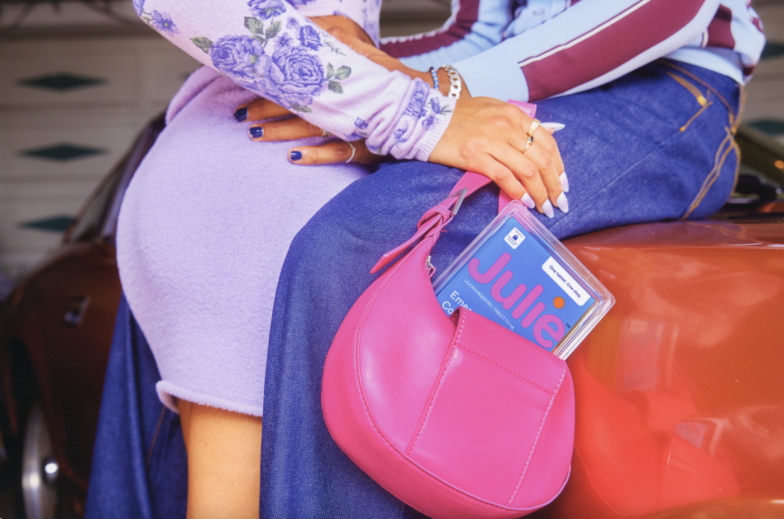 After successfully diminishing the stigma around acne and breakouts with their first co-created company, Starface, former beauty editor Julie Schott and entrepreneur Brian Bordainick are at it again. This time, they have teamed up with Amanda E.J. Morrison of Mented Cosmetics to break an even bigger stigma: emergency contraception. Together, they’ve launched Julie, a Walmart-exclusive emergency contraceptive pill, re-branded for millennial and Gen Z women.

“From the beginning with Starface, it was always this idea of creating a better coming of age story for young people,” Schott said. Acne, like an unwanted or ill-timed pregnancy, can be an impactful and universal experience, she noted.

With Julie’s debut on the market, the founders hope it gives Gen Z a better experience should they need to purchase emergency contraceptives — starting with its name and packaging. The boxes are bright blue with pink lettering. Julie will sit in 4,500 Walmart doors and on Walmart.com, priced at $42.44. “It’s available without an ID, without a prescription [and] no age restriction,” Bordainick said. According to Planned Parenthood, contraception generally ranges between $10 and $50.

In the aftermath of the overturning of Roe v. Wade, it’s critical that young women and people, in general, have access to factual information. Emergency Contraception is legal in all 50 states and is not the same as the “abortion pill,” though many are confused about what options serve what purposes. “In putting out the information and the education about what EC actually does, we’re actually allowing more women to participate,” said Morrison. “No matter where you are geographically, no matter where you are politically, no matter your ideology … it’s about pregnancy prevention. [When people understand that], more women, particularly more conservative women, are open to participating.” Julie also created a medical board of female doctors, some with large TikTok followings, to help establish itself as a credible source of information.

The founders agreed that the brand should have a human feel, which is why they gave it a woman’s name. That it shares its name with Schott is not entirely intentional. “Everybody knows a Julie. She’s friendly. She’s kind. To me, Julie is your big sister, older cousin, young aunt. She’s been there, done that; she’s not going to judge you. She’s not going to preach to you, but she’s definitely going to tell you how it is,” Morrison said.

The brand also has a 1:1 donation model. For every Julie sold, the brand will be donating one. It will make donations on a quarterly basis, with the first to come in January. Donations will go to Planned Parenthood, women’s shelters, college campus women’s clinics, and more. Official partners have not yet been announced.

The trio raised $5 million dollars in partnership with Connect Ventures, which is a joint initiative between the talent agency CAA and the VC firm NEA. Notable investors include Shonda Rhimes, Gabrielle Union, Meghan Trainor, Kelly Rowland, Esther Povitsky, Aurora James and Gracie Abrams. These bold-faced names will help the brand get its message out and educate accordingly. The content they will share, however, remains to be determined.

“The opportunity to reset the narrative around this product is tremendous,” Schott said. Povitsky, who is a comedian and also invested in Starface, said, “I feel like I’m always trying to correct sad moments in my childhood. This felt like an avenue to do that.” That is to say, the act of buying emergency contraceptives doesn’t have to suck or feel like a “second walk of shame,” as Morrison noted it often does.

“When I saw what the packaging for Julie was going to look like, I instantly recreated that [teenage] memory in my head and was like, ‘Oh my god, if I saw that at Walmart in Skokie, Illinois, when I was 16 I would have wanted to buy it. I would have felt happy to have it in my purse or on hand,'” said Povitsky. “I could visualize myself laughing with my friends like, ‘Oh, I had sex with a loser. I’m gonna grab Julie on the way home.'”