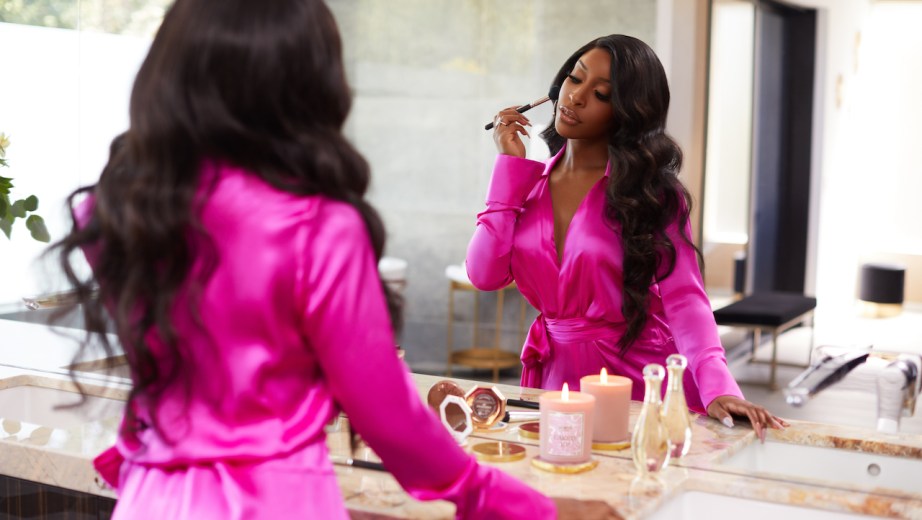 After teaming on makeup collaborations with Anastasia Beverly Hills and Too Faced, beauty influencer Jackie Aina is branching out into fragrance and self-care with the launch of her first brand, Forvr Mood.

Aina’s lifestyle and self-care brand launched DTC on August 4 (exclusively to those who had pre-registered), with four candles for $35 each, plus two colors of silk pillowcases ($49) and headbands ($28). With 45,000 members pre-registered, the brand sold out of its pre-sale inventory within minutes, said Aina. Shipping will start on August 10, and she plans to include Instagram Checkout as a sales channel this month. Aina is also currently in conversations with potential retailer partners, and plans to roll out more items in the future with candles serving as the brand’s hero product.

“I have wanted to dabble in candles and fragrance for quite some time now,” she said. “I definitely thought it would be great to have a makeup line, but that’s not the only thing that I love.”

“I feel, especially as a Black woman, we need to care more about self-care. We take on so much in our day-to-day lives, even pre-pandemic. I’m so used to seeing ‘rise and grind’ Twitter messaging everywhere,” she said. “Especially in my community, [women] don’t typically talk a lot about and encourage enough about putting yourself first, taking the time to step away from the computer; step away from work. A big part of what’s helping me get through the pandemic are candles.”

Aina started planning a candle brand in 2018 and, after putting plans on hold for six months, resumed brand building in late 2019. While the pandemic has caused some delays in shipping, it has also driven increases in candle sales. The NPD Group found that when the pandemic hit, prestige candle sales grew 6% as makeup plummeted.

The brand is self-funded, which Aina said has the advantage of not needing to “get approval from anybody,” including “no middleman.” However, she said she would be open to outside investors in the future for subsequent brands. “This isn’t the only brand I want to launch. I think it’s important to have a well-rounded portfolio of companies and brands. I don’t necessarily want to own every single brand that I start.”

With 3.5 million subscribers on YouTube, Aina said being outspoken about important issues can generate more interest in a brand than an influencer’s star power alone.

“Right now, more than ever, people want to support a cause,” she said. Aina has been vocal about diversity and inclusion in the beauty industry for years, previously launching her collaboration with Too Faced as part of her efforts to improve foundation shade ranges. She has also been outspoken during the Black Lives Matter social movement over the past several months, supporting Uoma Beauty founder Sharon Chuter’s Pull Up For Change campaign that prompts brands to reveal their corporate diversity statistics.

“I’m so proud of all her work and persistence with this,” said Aina, of Chuter. Earlier this year, Aina collaborated with Patrick Starrr on an Uoma Beauty eyeshadow palette. Of the Pull Up for Change campaign, she said, “I feel like it’s definitely confronted a lot of what we already knew about the industry, that no one really talks about. And it’s crazy how much of a domino effect it caused.”

When it comes to the beauty companies that have been releasing responses and plans to improve their diversity, Aina said she has had a range of reactions. For some plans, she said, “‘Yeah, that’s definitely not going to do anything.’ And I’ve seen others that were like, ‘Okay, that seems promising.’ The real work to be done is the weeks, the months and the years that will follow this,” to “see if they will continue to follow through.”

Regarding the recent push for inclusivity within the beauty industry, she said, “It’s gotten better. I would love to see a lot more people putting more action behind the words that they say they’re doing online. I love the fact that up-and-coming brands and Black-owned brands, for example, are getting more visibility.”

One area that she said still needs to change is the lack of diversity in the influencer videos being surfaced to audiences on social platforms.

“I would love to see a better opportunity for more diverse creators online,” she said. “It’s still really hard for a lot of people to figure out the algorithm and find creators that look like them. By default, most apps — if not all — are going to recommend white creators.”

As she launches her own brand, Aina said she is “probably going to be retiring from beauty collabs, because I wanted to end that on a high note. When you work [on] a collab, you’re basically giving the brand access to something you’ve created, which is great, because they do all of the heavy lifting. But at the same time, there are so many more things I want to create.”