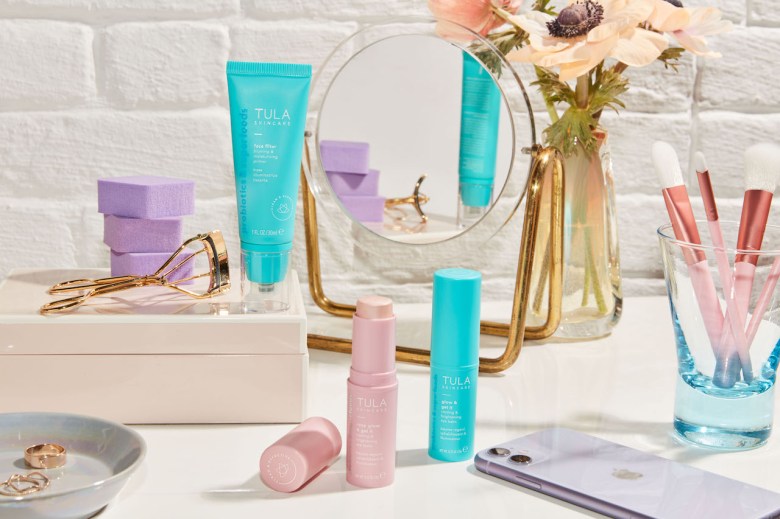 After launching in Ulta 18 months ago, digitally native brand Tula is refining its retail playbook.

This month, the probiotic skin-care brand will launch its full 30-plus product assortment in nearly all 1,200 Ulta stores — where it is merchandised in between Proactiv and Clarisonic — and will host 233% more events in said locations over the course of the year. The amplified suite of offerings is to drive Tula’s brand awareness nationwide and increase top-line sales. Though Ulta does sell other clean beauty brands like Kopari and Bare Minerals, it does not have a designated program or set of standards like Sephora and Target. In many ways, Tula is hoping to be Ulta’s hero clean skin-care brand.

“Unlike some of the digitally native brands that you see in the market, where their strategy has been to open their own brick-and-mortar stores, we opted for a big retail relationship,” said Savannah Sachs, Tula CEO. “It really is the age of democratization in beauty now, where the customer wants to pick up her favorite everyday mass mascara and splurge on a fancy new face mask all in one shopping experience. We want to make shopping for Tula easy for her.”

Beyond its DTC site, the 6-year-old company had initial wholesale partnerships with QVC and Nordstrom. Sachs would not share overall Tula sales figures; however, she said DTC remains Tula’s largest channel and annual revenue has grown just under 300% the last two years in a row. (Influencers drive about 50% of revenue on Tula’s e-commerce site.) Meanwhile, the retail portion of the business is “growing even faster,” she said. The brand raised a Series A round with L Catterton in 2017.

In order to make a greater imprint in Ulta, where emerging brands have reportedly felt growing pains or gotten lost, Tula’s event has been thoughtfully planned. Given coronavirus concerns, Tula is holding on its 500 planned in-store events until mid-April.

“We take the health and wellness of our consumers, partners and team members extremely seriously and will be canceling all events through mid-April, in line with Ulta guidance. We will continue making necessary adjustments to our events strategy, as the situation continues to unfold,” said Sachs.

Last year, the brand held 150 events in Ulta locations, but Sachs wanted to better incorporate ways the company could capture customer interaction and data with the retailer this year. In January, Tula hosted a branded takeover of Ulta’s skin bar, which is much like the retailer’s “back bar” hair program that has been trialled in the last year.

There, aestheticians were trained on two customized Tula facials, and customer surveys were conducted. Tula is only the second brand to participate in this program for a full month. Through the hair back bar offering, participating hair-care brands such as Living Proof, Drybar and Sexy Hair, have seen increased sales, Monica Arnaudo, Ulta chief merchandising officer, previously told Glossy.

Tula’s timing is right. As the color cosmetics category remains flat industrywide, prestige skin-care sales grew 7% in the third quarter and 2% in the fourth quarter, according to NPD. And mass skin care was up 1.8% and 1.6% in the last two quarters, respectively. For its part, Ulta saw skin care increase to 21% of total revenue in the third quarter, a 2% increase year over year.

Results from Tula’s digital skin quiz found that 48% of its customers struggle with acne as one of their top concerns. Furthermore, consumers who had acne issues had a 40% higher LTV [lifetime value] than other shoppers. Tula debuted a second probiotic product this month to drive its “holistic” and “clean beauty” approach to skin health, and on March 18, Tula is debuting its fourth acne product, a moisturizer. The acne-focused moisturizer is the company’s first omnichannel product launch — typically it pulses products first on its e-commerce site before heading into partner channels. Sachs said the dual-channel strategy was prompted by learning that 68% of customers who bought an eye balm product that came to market in 2019 were first-time Tula customers.

“Being in more than 1,100 Ulta doors is like having more than 1,100 out-of-home advertising moments,” said Sachs. “We wanted to be the modern skin health brand for our customer, and show her who and where we are.”