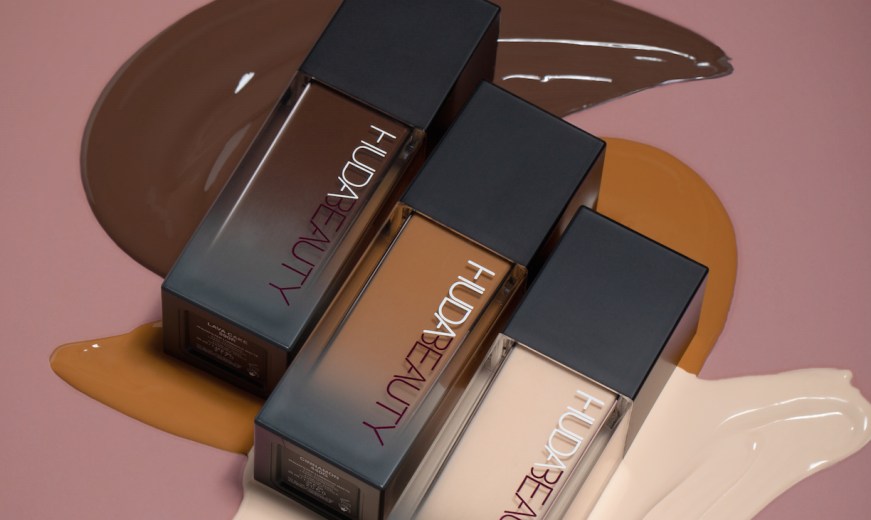 To promote the reformulation and relaunch of one of its best-selling products, the Faux Filter liquid foundation, Huda Beauty is putting its crowdsourcing attempts at the center of its marketing.

The Faux Filter liquid foundation first launched in 2017 and is a top-three best-selling product for the 8-year-old brand. Its relaunch at the end of January was prompted by customer feedback on the product, including requests to make it fragrance-free and easier to apply for makeup neophytes.

Michael McNeil, Huda Beauty svp of global marketing, communications and strategy, said that Huda Beauty’s crowdsourcing process was not as formulaic as a traditional approach, with formal surveys, polls or solicitations of input. He said that today’s social media platforms allow an individual to have a dialogue with a brand, and Huda Beauty’s audience is particularly engaged, so the company didn’t find it necessary to craft a formal crowdsource campaign. He added that the events of the last 12 months pushed Huda Beauty to promote how feedback is used in its product ideation and formulations.

“We really wanted to tell this [crowdsourcing] story, because it was important for people to feel heard. We know that in 2020, and even in 2021, people have felt like they haven’t been heard, or [experienced] the recognition and validation that they need,” said McNeil. “Huda wanted to tell people, ‘You’re important, so we did this with you in mind.’”

Huda Beauty does not disclose sales, but Forbes estimates the brand brings in at least $250 million in annual sales, while Business of Fashion reported the brand’s revenue was $400 million in 2018. Private equity firm TSG Consumer Partners acquired a small minority stake in the company at the end of 2017 in a deal that valued the company at $1.2 billion. Huda Kattan, Huda Beauty founder, was CEO until Sept. 2020, when Nathalie Kristo was appointed after joining the team in 2018 and establishing the brand’s North American operations. Kattan said her role as CEO meant she had to “sacrifice” being involved in other areas of business, such as product and content creation.

“With more time and mental space free, I’ll be dedicating more of my time to content, product development and building our social community,” she said. “Behind-the-scenes, I will continue to work with Nathalie on fostering new initiatives that will expand on the brand’s legacy of digital excellence.”

The marketing team relied mostly on conversations and comments from customers on Instagram and Facebook for crowdsourcing information. McNeil said this is a manual process, with comments and suggestions first added to a master Excel spreadsheet; collecting feedback took place over approximately four years. From there, the team distilled the top issues with the existing formula, which were that it had an overpowering fragrance, it was not non-comedogenic, it contained silicone ingredient D5, and it was difficult for some people to blend. McNeil said the Huda Beauty team tries to evoke Kaizen, a Japanese business philosophy meaning “change for the better” or “continuous improvement.”

McNeil said Faux Filter’s marketing assets across channels promote the crowdsource narrative. That started with a YouTube video from Jan. 19 where Kattan announced the reformulation. The brand’s Instagram account typically posts 3-5 a day, featuring a mix of user-generated content, tips and tricks from Kattan, memes and other light-hearted posts.

“Huda Beauty’s focus is really spotlighting [crowdsourcing and feedback] — that includes [past feedback], but it’s also placing a central focus on the consumer for Huda Beauty moving forward,” said McNeil. “Consumers are going to [buy from a brand] where they feel alignment to the values of the brand, but also where they feel like the brand is aligning to them.”