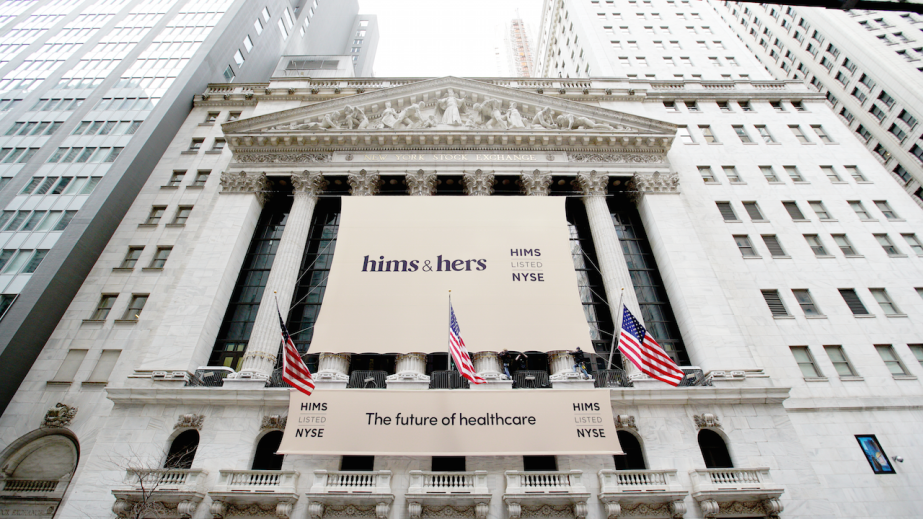 On Thursday, the startup Hims Inc. officially became a public company by debuting on the New York Stock Exchange as Hims & Hers.

Hims & Hers announced in Oct. 2020 that it would go public through a SPAC by merging with Oaktree Acquisitions Corp., a blank-check company. A SPAC — which stands for special purpose acquisition company — allows a private company to go public without engaging in a traditional IPO roadshow. Most recently, Hydrafacial announced in Dec. 2020 that it too would go public through a SPAC. At the time of this story, the Hims stock price (under the OAC ticker) had increased by 60% since its October announcement.

Glossy caught up with Andrew Dudum, CEO and co-founder of Hims & Hers, to talk about the company going public using a SPAC, its aggressive category expansion plans and its likelihood of having an offline business.

What interested you in a SPAC to go public? Do you anticipate the model will increase in popularity?
SPACs will become far more common for higher-quality companies over the next few years, as more people become aware of them. Very few people knew about the SPAC structure more than a year ago. Most [startups] were looking at more traditional IPOs, which was definitely the case for Hims & Hers over the last 18 months. We built out the board of directors and the executive leadership team, and the infrastructure to support a more traditional IPO process. But when we started to learn about the SPAC modality and structure, it had compelling components. It was a process that felt more streamlined and capable of completion in six months, instead of 12-18 months. I’m very protective of my management team’s time, because I’ve seen the value when they are ruthlessly focused on the company. When they’re distracted by external fundraising events, it’s a value loss. And a SPAC was also a process that felt priced appropriately. A traditional IPO takes 12 months, and then on the last day, your bankers are adjusting the price, and then it pops 100%; there’s more variability with it.

Will you be getting into more categories and products at a faster clip?
What you’ve seen from us in the last few years is a consistent expansion into more categories, one by one. We’re going to keep chugging along and investing this year in things like dermatology, sleep, mental health and testing. Then, we’ll invest in more chronic conditions plaguing a huge portion of our population, like hypertension, cholesterol, diabetes and fertility. Every year, for the next five to 10 years, we’re going to bite off a few of these [categories]. We debate [internally] what portion of the U.S. health-care system can be moved online over the next five years, and our answer is roughly about 80%. So 80% of the reasons we go to the brick-and-mortar hospital will be digitized through an experience like Hims & Hers — with something affordable and beautiful, and that you can access from your phone.

Hims & Hers has been criticized in the past for some of its business practices. Are you concerned by the increased scrutiny of a public market and the need to provide shareholders’ profit?
If you look under the hood of our business, the company is not growing at any cost. In fact, the company is getting more profitable quarter-over-quarter and is getting more efficient. It’s building more medical stability; it’s building more credibility from a clinical standpoint. And it’s getting more of the best-in-class medical advisors and leadership in the country involved in the company. [Being public] is doing the opposite of [growth at any cost], but we’re now trying to prove to the market something new and scary: telemedicine.

Given that Hims & Hers is DTC, what opportunities exist offline?
I do believe that an in-person component [of the business] is critical, because the reality is that you can’t treat everybody via digital health. Some people also still prefer the comfort of going in and talking to a specialist. We think there are exciting opportunities for us to do our own brick-and-mortar, such as pop-ups or quick-trip locations where people can talk to specialists. We also started to experiment with Target [in April 2020], in all 1,800 stores, with our over-the-counter products.