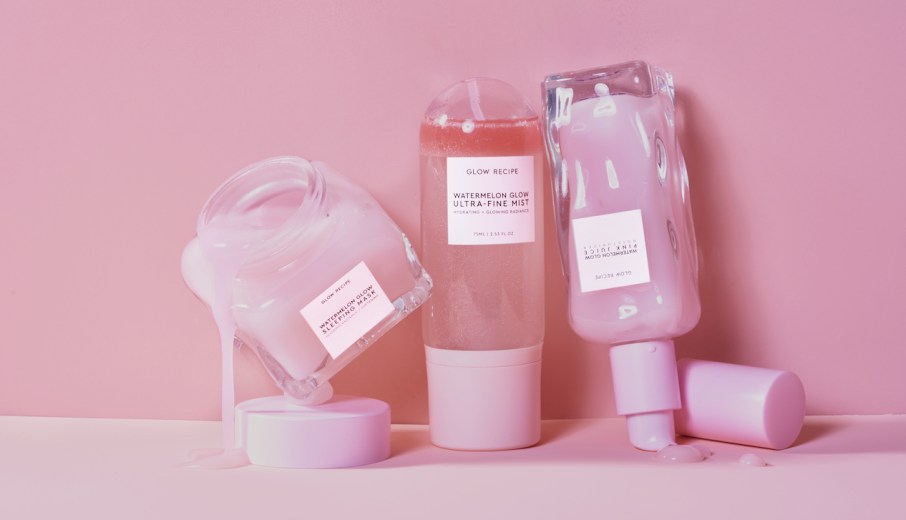 Soon after its March debut in 400 Douglas stores in Germany, Glow Recipe will enter into 100 Mecca locations in Australia and New Zealand on July 2. It has been a rapid ascent for the 2-year-old, fruit-inspired brand, which is a private-label spin-off of the Korean beauty e-commerce site GlowRecipe.com. After launching exclusively with all Sephora stores in May 2017, where the brand has now moved from in-aisle displays to branded end-caps, it expanded to all Sephora Canada doors in August 2018.

According to Glow Recipe founders Sarah Lee and Christine Chang, the Glow Recipe Skincare line accounts for well more than half of overall company sales, though they declined to share exact 2018 figures. WWD previously reported that the brand was estimated to hit $30 million in retail sales in 2018. Lee and Chang said the whole business saw triple-digit sales growth last year.

“When we set out to create Glow Recipe, our mission was to apply our extensive knowledge of K-beauty innovations, and break them down in diverse, informative and relatable ways for consumers everywhere,” said Chang. “We have always wanted to provide our products to our beauty community all around the world. International transactions are 10% of our e-commerce business.”

Like fellow K-beauty companies Memebox and Peach & Lily, Glow Recipe is rapidly growing its private-label arm of the business. It plans to launch five more Glow Recipe Skincare products this year (the line currently consists of 11 items), and in step, it’s also expanding its second incubated brand, Sweet Chef. The vegetable-inspired line, with products inspired by kale, beets and ginger, launched in Target in January, and Lee said that it is outpacing projected numbers. A selection of Sweet Chef products are also now stocked at 300 Urban Outfitters stores, and the company is adding eight more items to that lineup in 2019. Two will launch in July. Private-label and incubated brands have become a de facto move from many beauty players, from Dollar General to QVC, in 2019.

Glow Recipe’s measured drop strategy, along with its unusual influencer activations — like its sleepover in a mattress store for its Avocado Melt Sleeping Mask in November 2018 — have also contributed to a social media frenzy. In March, Glow Recipe made its first appearance in Tribe Dynamics’ “Top 10 Skincare Report.” The brand ranked No. 8 and saw 110% month-over-month growth due to the expansion of its hero watermelon skin-care range. Its Watermelon Glow Ultra-Fine Mist garnered $1.1M earned media value [EMV].

Chang and Lee would not disclose if other international markets are in the works for Glow Recipe or Sweet Chef, but it would appear likely.

“We are constantly receiving customer inquiries on our social channels about whether our products are available in different countries,” said Chang. “We have been seeing demand worldwide, and it all depends on having the right retail partners that understand our brand vision so that we are bringing products to global customers in the way we envision.”