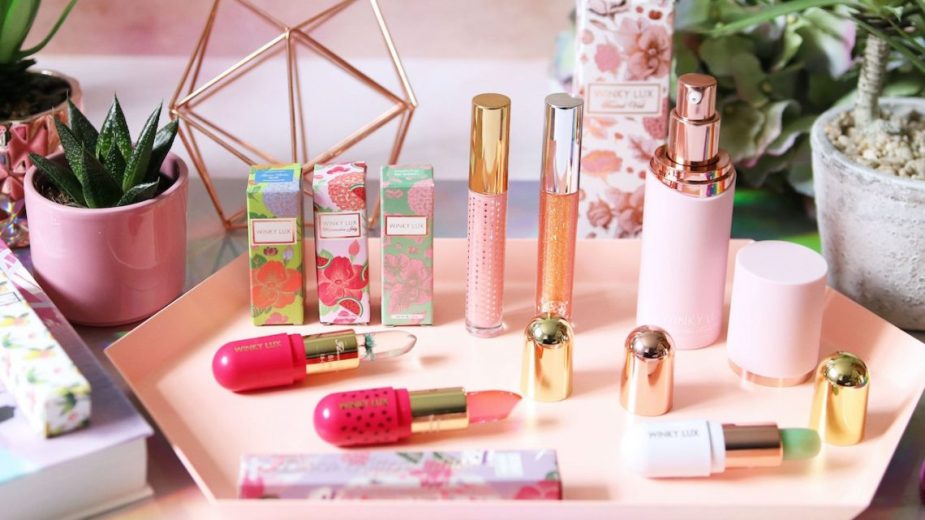 On Thursday, Winky Lux announced it is expanding to nearly all 1,868 Target doors with 68 products on March 1. This marks Winky Lux’s most significant wholesale partnership from both a doors and a product perspective.

Founded in 2015, Winky Lux has relationships with Sephora, Macy’s, Ulta, Amazon and Nordstrom, but typically sells about five products in each of those retailers. As the brand has grown, it has come to understand that a larger presence can tell a better brand story and increase sales. Its own two standalone stores have a 15% higher average purchase size, said Natalie Mackey, Winky Lux co-founder and CEO.

Winky Lux sales are currently 30% DTC and 70% wholesale. With the expansion into Target, wholesale will jump to 75% of the business. Mackey declined to state sales expectations for 2020 but said it has been doubling sales every year since 2018 and will become profitable later this year. Forbes reported in 2018 that the brand expected to earn $17 million in sales that year, which Glossy estimates would put 2020 sales around $68 million.

“We discovered that in our standalone stores, where customers get [more exposure to] the brand, leads to a larger average order value,” she said. “We knew we wanted to partner with a big retailer and make sure our visual merchandising display was closer to what we have in our stores.”

Winky Lux’s custom endcap displays in Target feature Winky Lux written in neon lettering, a lenticular image of their hero flower balm lipstick, as well as a giant 3D lipstick in the middle of the display. Mackey and Target declined to specify the cost of these displays. But the in-store displays also have three callouts around clean ingredients, being a cruelty-free brand and state that none of their products contain plastic glitter – three topics that Mackey said Winky Lux had a limited chance to showcase in other retailers. Another differentiating factor is that the K-beauty and French-inspired packaging is prominently displayed in Target stores. Shelf space in its other retailer partners is mostly dedicated to offering product testers to let customers touch and feel products.

“[Winky Lux] stresses ethical ingredients, sustainable practices and has beautiful packaging,” said Krista Corrigan, Edited retail analyst. “Its fun and feminine themes are a breath of fresh air for the beauty consumer and are a departure from the minimalistic design aesthetics used by many in the industry today.”

Winky Lux’s entrance into Target occurs as the mass retailer has been undergoing a countrywide revamping of its beauty department, with a particular emphasis on new layouts. In 2017, Target began rolling out elevated stores with more focus on beauty, opening a total of 400 stores by the end of 2018, according to previous Glossy reporting. Instead of traditional aisles, these locations have more open shelving and counter space where customers can chat with beauty sales associates.

Cassandra Jones, Target vp of general merchandising, beauty and cosmetics, called out Winky Lux’s affordable price point (which is between $15 and $30), clean formulations, and being a “fun” cosmetics brand as a boon to Target.

To prepare for entering into this partnership, Winky Lux had to extend additional lines of credit to order “millions of dollars” worth of inventory, said Mackey. However, Winky Lux owns its distribution, so it did not have to find new warehouse facilities. The brand also hired its first general manager, Staci Hendrickson, in January. To support the launch, the brand is investing an undisclosed percentage of Target sales back into marketing, which will change quarterly. In March, Winky Lux will begin a campaign on TikTok by gifting products to 50 unpaid TikTok influencers; in April, it will work with 20 paid influencers through a formal partnership with TikTok to promote these videos. With the Target expansion and an operational team in place, Mackey expects the brand to have more control over its future and further attack the color cosmetics and skin-care markets.

“What’s exciting to me is going after the Estée Lauder Companies, and L’Oreal portfolios, slicing off market share from them is not that hard,” she said. “The customer is ready to look at something fresher, so competing against other DTC brands does not fire me up as much in the morning compared to legacy brands.”