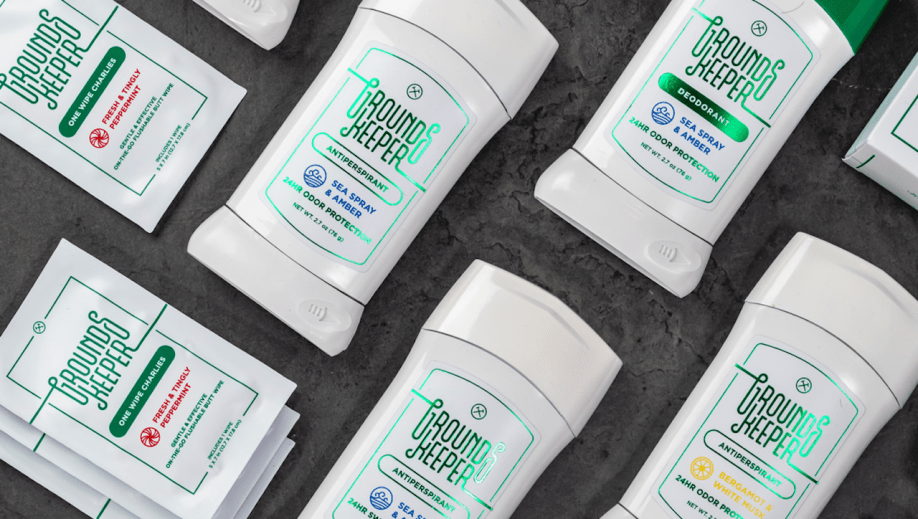 Dollar Shave Club continues to expand, with deodorant and antiperspirant

Once known exclusively for its razors, direct-to-consumer company Dollar Shave Club continues to shape-shift. On March 5, the men’s personal care brand, which was acquired by Unilever for $1 billion in 2016, moved into the deodorant and antiperspirant category.

The six-piece line, dubbed Groundskeeper, includes antiperspirant sticks, deodorants and butt wipes. The collection ranges from $5 to $6, and can be found solely on DollarShaveClub.com.

The deodorant market is on the rise, as of late, thanks to the active lifestyles of millennials and Gen Z. In 2017, it was estimated to be worth over $4.5 billion, and it’s expected to grow by 11 percent by 2022. The men’s deodorant category is increasing fastest: Sales will be up 26 percent by 2022, to 2.6 billion, according to Euromonitor International.

“DSC has moved beyond razors once a month. When you think about the categories people use every day — shave, shower and oral care — deodorant and antiperspirant is an obvious need. We want to affirm our business promise of being everything our guy needs in the bathroom,” said Dollar Shave Club founder and CEO Michael Dubin.

According to Dollar Shave Club brand development manager Chloe Jensen, the Groundskeeper deodorant and antiperspirant line had been in the works for two years and was prompted by customer demand; the brand has seen asks for long-lasting, efficacious product for almost three years. Groundskeeper claims 24-hour coverage.

Per Dollar Shave Club, 58 percent of its more than 4 million members currently use an antiperspirant, and 37 percent use a deodorant. Of that base, only 49 percent are satisfied with their current regime. “Knowing that 61 percent of our guys were willing to try another brand and wanted something better made us respond,” said Jensen.

The Groundskeeper deodorant and antiperspirant debut follows Dollar Shave Club’s recent product category launch into fine fragrance through a line called Blueprint in November. Prior to that, DSC introduced its Superba oral care line in 2017 and its shower collection called Wanderer in 2016. (Dollar Shave Club first came to market in 2011.) Like the brand’s Blueprint launch, Groundskeeper was made with fine fragrance developer Ann Gottlieb, who created Calvin Klein’s scents CK1, Eternity and Obsession to offer a premium product experience at affordable prices.

Groundskeeper will be offered in DSC’s full-service model, which gives its members more flexibility in replenishment cadence and product assortment. Since its pilot in March 2018, customers are no longer locked into a fixed, monthly subscription and can customize shipment frequency, as well as what products come in each box. Still, to fuel product demand, customers are offered what the brand labels “Handsome Discounts,” or deeper price reductions on items the more customers buy per box. To further emphasize DSC’s value proposition, Groundskeeper’s $5 deodorants and antiperspirant sticks could be up to 15 percent off with the discounts, retailing for $4.25.

Parent company Unilever has been retooling its deodorant category as of late: In January, Unilever introduced deodorant wipes across Degree Men, Dove Men+Care and Axe, and women’s brands Degree Women, Dove and Love Beauty and Planet, to respond to increased demand. But Dubin said the new Dollar Shave Club offering was launched only in response to the brand’s existing customer base, not a company-wide initiative. According to Euromonitor, Unilever’s Degree is third in brand rankings in the U.S., while Procter & Gamble’s Old Spice and Secret rank No. 1 and No. 2, respectively.

The deodorant and antiperspirant play speaks to larger strategy for the brand. “We think what works best for us now is a multi-category subscription, to offer our customers freedom in looking, smelling and feeling their best,” he said. That approach seems to be working — Dubin said Dollar Shave Club’s grooming business is catching on fastest, growing 400 percent in 2018, while its shaving-only option is declining.

While Dubin would not disclose exact launch details for the rest of the year, including deodorant wipes, but he did say that more categories and more products themselves will be debuting from Dollar Shave Club in 2019.

“We don’t want to be launching products all the time, but our direct platform allows us to make decisions based on what our customers want and need — and they still do want more from us,” he said. “We need to cover a lot more categories over time, but we are still focused on getting the engine right by talking to our customers all the time. We are walking that launch path carefully.”