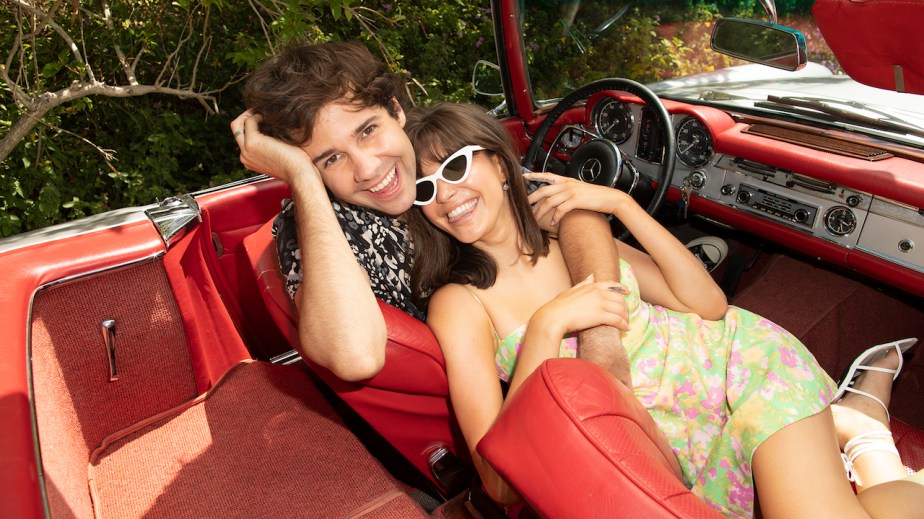 In the tradition of Britney Spears and Paris Hilton, social media megastar David Dobrik has launched his own celebrity fragrance line — but virtually.

“I love smells. Obviously, I love the smell of gasoline and I love the smell of Sharpies, Expo markers and cherry air fresheners,” said Dobrik. “Initially, Isaac was like, ‘Tell me your favorite smells.’ That really didn’t work.” A Sharpie-scented fragrance, he said, would be “kind of tough to bottle up and convince people to wear.” But Dobrik is also a fan of high-end fragrance brands, including Escentric Molecules and Le Labo. Taking inspiration from this end of the scent spectrum, he worked with Lekach to test out 50 different scent combinations until finding ones he liked.

It’s impossible to deny Dobrik’s massive online influence. With over 23 million followers on TikTok, 18 million on YouTube and 14 million on Instagram, he has shown a strong aptitude for mobilizing his fans to action. They elected him People Magazine’s “sexiest heartthrob” in November last year. For the 2020 election, his Tesla giveaway voter turnout drive registered an estimated 120,000 young voters; he launched a second campaign in partnership with Leonardo DiCaprio.

Dobrik’s comedy-driven content has been described as a cross between “Jackass” — for his love for pranks — and “The Oprah Winfrey Show,” thanks to his penchant for car giveaways. He was most recently enlisted to promote the new “Borat” movie with a video with Sacha Baron Cohen. But he insists his fragrance is serious.

“He has a magnetic personality,” said Lekach. “In order to translate into luxury goods, like fragrance, you need to partner with with someone who is aspirational, and I would say that he absolutely is.”

“The commercial for it was pretty serious,” Dobrik said, of a commercial featuring him and model Charlotte D’Alessio that received over 5.5 million views on YouTube. “It was a little bit goofy, but it wasn’t necessarily funny. If it wasn’t for the pandemic and I was still making videos, I think there’s a lot of fun stuff I would have been able to add.”

The new brand was also recently featured on “The Tonight Show Starring Jimmy Fallon” when Dobrik appeared as a guest, and is receiving significant visibility from being featured across Dobrik’s social media accounts. One way he won’t promote it, however, is through livestreaming.

“The one thing I hate is livestreaming,” Dobrik said. “I think it’s the most ridiculous form of anything. I just think it’s so miserably boring.”

While the celebrity fragrance business has typically been tied to department stores, Dobrik’s launched exclusively online. According to Lekach, who previously helped launch fragrance lines for Katy Perry, Paris Hilton, Adam Levine and Ed Hardy, the sales model was in need of an overhaul.

Department stores “were mainly interested in just cycling through newness,” with celebrity perfumes, said Lekach. “They would bring in as many new launches as seemed appropriate, and get all the attention and all the excitement, and then as soon as the excitement sort of died down, they would exit the brand. It didn’t really give you an opportunity to establish the brand at retail.” He noted that this led to a cycle in which “eventually, with certain products, you will be forced to go downmarket.”

Lekach noted that Flower Shop, meanwhile, is focused on DTC e-commerce, which he believes is a more sustainable model. “Now, you’re able to control the conversation and do that online. So I think there’s a new opportunity for celebrities, or even just digitally native brands that might not have an opportunity in traditional retail.”

In order to sell a scent online, the key, said both Lekach and Dobrik, is to convey the lifestyle associated with it. “You’re kind of trying to sell the vibe,” said Dobrik, saying the commercial was created to convey “what it feels like when you’re wearing the perfume. Obviously it’s not as cool as getting to smell it in person,” he noted, “but it’s the next best thing.”