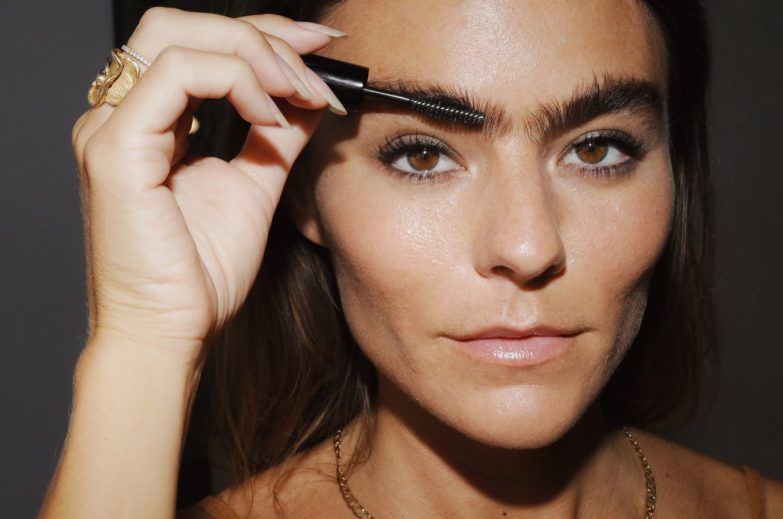 Kristie Streicher started her beauty career as soon as she possibly could — as a makeup artist at the Clinique counter, right after high school. From there, she was inspired to go to esthetics school, where she learned the art of eyebrow maintenance via waxing. “They don’t teach you how to artfully tweeze, so that’s what I developed on my own after getting licensed,” she said.

At the start of Streicher’s career, in 2001, she took a job at hair salon Warren Tricomi, where she was delighted to discover that brow shaping could be a full-time job. Slowly but surely, she started to develop her now signature style. “I noticed that [New Yorkers] all hustled and worked hard and were so chic … but they didn’t take great care of themselves. [They were also] overly doing their eyebrows, and it made them look so much older than they were. … I was like, ‘We need some softness here, [not these thin, dark eyebrows].”

Streicher encouraged clients to go at least three weeks between appointments and let their brows grow. Based on her large male client base, women assumed her approach provided a more natural look, fueling her popularity. The approach was “unheard of” at the time, she said. It resulted in a write up in New York Magazine, in 2003, in which she was awarded “best brows.” It changed her life overnight: “I went from doing from doing 5-6 brows a day to 37 brows a day,” she said, noting that the story attracted people from all over the world and her first celebrity clients, including Julia Roberts. She then began offering her services to editors at Vogue, which resulted in more media coverage. Streicher’s brow clients now include Gwyneth Paltrow, Lorde, Adele, Mandy Moore, Sandra Bullock, Sarah Paulson and Marisa Tomei.

Streicher is well-known among beauty insiders, thanks to her trademarked “feathered brow,” as well as the power trio she forms with her two sisters. Jenn Streicher is a celebrity makeup artist, and Ashley Streicher is a celebrity hairstylist. In 2014, they came together to open Striiike, a beauty studio in Beverly Hills where guests can have their brows, hair and makeup done. According to its website, a 30-minute “Feathered Brow” service with Kristie Streicher costs $275.

Now, Streicher is adding to her brow empire with the launch of K.S. & Co, a tight edit of three brow essentials informed by her 23-year career shaping brows. They include a Microfeathering Brown Pen ($42), which comes in three shades, a Clear Strong Hold Brow Gel ($32) and a Sheer Tinted Brow Gel ($36), in two shades. Streicher said two shades — a medium brown and a dark brown — are more than enough. It’s interesting position when, for example, Anastasia Beverly Hills’ Brow Wiz Ulta-Slim Precision Brow Pencil comes in 12 shades.

K.S. & Co launched direct-to-consumer, sold via a dedicated website and at Striiike, on Wednesday. In addition, one product will be featured in the sisters’ quarterly beauty box, in January. To promote the launch, the brand is investing in gifting Streicher’s community of influential and famous friends and clients. Many “plan to share the launch organically with their audience,” according to a K.S. & Co spokesperson.

Streicher self-funded the brand and is not currently looking for outside investment. Past partnerships with brands including Chanel, Hourglass and Kosas, as well as her brow clients, of course, helped her to fund the project. And she’s spend the last five years developing the products.

“[With other brands] maybe you love the formula, but you don’t like the applicator. Or it’s not clean, or the color range isn’t great,” she said. “I realized how important it was to have the right products to execute my vision and philosophy.”