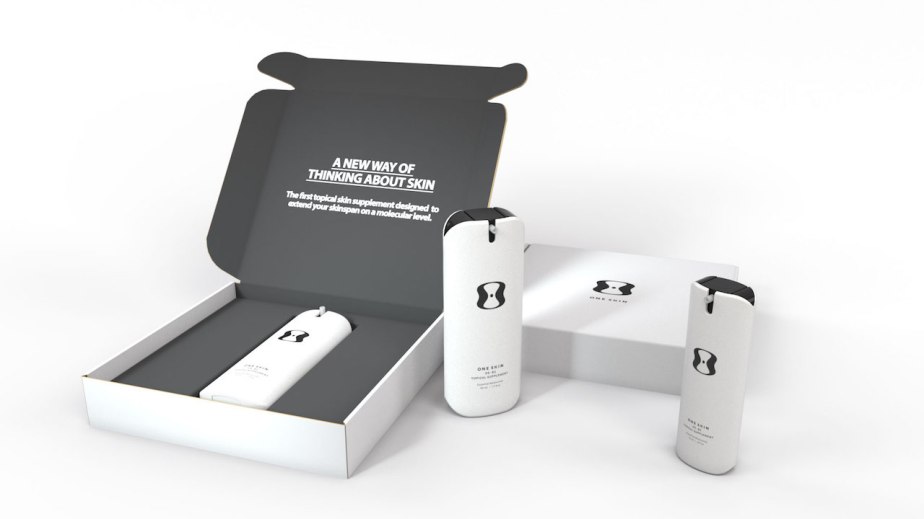 As research on longevity has become a fixation of biotech startup investors, newly launched skin-care startup OneSkin is bringing it to the world of beauty.

Launching today via DTC e-commerce, the company is bridging the worlds of biotech and beauty after four years in development by a team of scientists. Coming out of the Bay Area-based biotech startup incubator MBC BioLabs, the brand has secured $7.5 million in VC and angel funding from sources including science accelerator IndieBio, SOSV and 2FutureHolding. The company’s board includes prominent investor Peter Diamandis.

The brand is launching with one moisturizer it calls a topical supplement, which is available online for $100 for a 50-milliliter bottle via a subscription or $120 with one-time purchase. Some of the promised results are typical of beauty products: firmness, smoothness, hydration and collagen production, based on the results of a clinical trial. Its main differentiation point, however, is that it can reduce the “biological age” of the skin through a patented peptide it created called OS-01. The brand states it does this by preventing the accumulation of senescent cells that cause aging. The brand ran a 3-month clinical trial ending in March 2020 that was found to improve aesthetic features such as elasticity and wrinkles. To address the biological age question, the next planned trial will run for between six months and a year, testing skin biopsied from behind study participants’ ears.

In a tweet promoting the brand, Diamandis called it a “longevity company,” referencing a popular biotech concept that is attracting massive startup investment from billionaires.

“We are seeing that the longevity space is growing; people will listen and learn more about what longevity is and expanding your health span and the importance of being healthier,” said OneSkin co-founder and chief scientific officer Alessandra Zonari. She referenced the popularity of David Sinclair, the longevity-focused biologist focused on the concept of “biological age.” Gwyneth Paltrow is also interested in the concept, having her “biological age” calculated on the Netflix show “Goop Lab.”

OneSkin, meanwhile, has its own biological age calculator for skin called the “MolClock” (meaning “molecular clock”), which it developed in 2016. The concept was developed after three of the brand’s four co-founders worked together in a Brazil-based lab on 3D skin-tissue models, meant to serve as an accurate alternative to animal testing. That eventually developed into the creation of their first skin-care product.

“We decided to focus on the anti-aging market that we saw was growing a lot, and it’s only going to grow. People are only getting older, but no one really knows which products work,” said co-founder and CEO Carolina Reis Oliveira. Oliveira holds a PhD in immunology and worked in Brazil with fellow co-founders Mariana Boroni and Juliana Carvalho, who also each have PhDs.

The three co-founders relocated to the Bay Area in 2016 to create their startup through IndieBio. Zonari, who holds a PhD in skin regeneration and tissue engineering, joined the company in 2017 as the fourth co-founder. In 2018, they began the process of screening over 1,000 peptides in search of anti-aging properties and discovered OS-01.

The brand is betting that this biotech concept will catch on in the age-obsessed beauty world. “We get overwhelmed about how many products that are out there, and you really don’t know because there are all the claims saying that they rejuvenate, or that you will look younger,” said Zonari.

The key for marketing to U.S. consumers is explaining the science in an accessible way. The brand will be focusing on content and education via social media promotions, especially through Instagram, as well as videos, webinars and Reddit groups dedicated to topics like longevity and age reversal. Reddit’s longevity group features an active and enthusiastic audience of over 64,000 members, who head to the message board to discuss topics related to biomedical rejuvenation, such as “stem cell therapies, anti-cancer viruses, gene therapy, senolytics and whatever is coming next,” according to the group’s description.

“We want to simplify this science in a way that people can connect with and can be easier to understand,” said Oliveira. “Basically, the way that we want to explain it is, ‘OK, this peptide, it’s able to act in the molecular level of your skin — in the deeper layers of your skin.’ How we differentiate is that most products only treat superficially.”

IndieBio, SOSV Ventures, and 2Future Holding were the brand’s first investors for its seed round, when it raised just over $2 million in 2017. The brand’s most recent funding round occurred in July 2020, with an angel investment of $1.5 million, following a $3.5 million post-seed round in July 2019 from several angel investors.