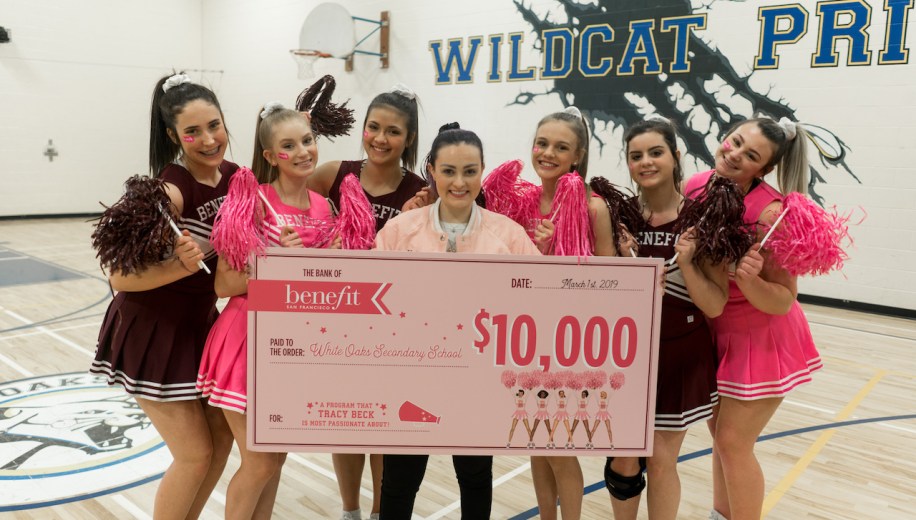 Benefit Cosmetics is using its influencers for good.

Earlier this month, the beauty company tapped five of its biggest brand ambassadors, including Alisha Marie, Christen Dominique, Remi Cruz, Ellarie Noel and Molly Burke, for its “Cheekleaders” activation, named after its palette collection. Timed with its latest palette launches, each influencer surprised their choice teacher (someone deserving of a cheerleader) in five locations, like Dallas, Toronto and Elk Grove, California, with $15,000 apiece, totaling $75,000.

The activation played out on the influencers’ social channels (together, the five ambassadors have more than 25 million followers on Instagram and YouTube) and Benefit’s Instagram, which has 9.1 followers. Using Instagram’s new double-live feature on IGTV that allows users to split-screen different videos (the tool launched in fall 2018), the beauty company saw nearly 560,000 views of the activation and 875 comments, which was a 1,700 percent increase from its average views.

“We love animating around our launches, and our customers want the beauty brands they love to stand for more than just makeup, so we wanted to bring this feel-good and emotional aspect to the launch,” said Erin Kramer, Benefit Cosmetics director of brand marketing and content. Benefit declined to detail its investment in the activation outside of the $75,000 gifts, but it did report it had 17 employees from its marketing, social and video teams on the ground at the five locations to capture the surprise gifting.

Women’s Wear Daily reported in 2018 that the beauty company has spent up to $10 million dollars on single influencer campaigns. Last year, industry sources reported that Benefit Cosmetics experienced double-digit growth and is forecasting similar growth for 2019, with sales over $1.5 billion.

Though the influencer activation was tied to Benefit’s latest product launch — Cheekleaders palettes, which retail for $60 — the beauty brand chose not to include a swipe-up-to-buy feature in any of its Instagram postings, as the exercise was not a conversion play, said Kramer. The Cheekleaders activation is in keeping with Benefit’s larger marketing strategy for 2019, which is centered on influencers and awareness versus calls to action to buy and promotions.

The beauty brand largely works with influencers in longer-term capacities versus one-off posts to further this effect, explained Kramer. “We have to find new ways to excite the influencer and the customer, as the space continues to get more crowded and to stand out,” she said. “Each of these influencers felt like this was organic to them, and their message and audience.” For instance, Burke was was diagnosed with Retinitis Pigmentosa, a rare retinal disease, at age 4 and lost her vision. She now works as a motivational speaker for the disabled community, and her $15,000 went to her high school special education teacher.

Benefit’s playbook is in keeping with larger beauty and personal-care trends. Across the board, companies are working hard to connect with their customers beyond product by emphasizing a social good element. Recent examples include L’Occitane and its female empowerment campaign that features employees as influencers and Unilever’s response to the beauty industry’s packaging problem.

By and large, Benefit’s influencer activation strategy seems to be working. According to Tribe Dynamics data, Benefit Cosmetics is routinely in the top-five ranked cosmetics brands in earned media value (EMV). In January, it held the fifth-place position with nearly $57 million EMV, which was an 11 percent increase month over month. Additionally, the brand’s 2,900 ambassadors each posted about the brand over four times, resulting in about $19,500 EMV per post.

Going forward, Benefit is planning on doing up to four more social-oriented events tied to product launches like Cheekleaders in 2019. It is also in the midst of its Boss Brows brand awareness campaign, which features Ban.do founder Jen Gotch, LGBTQ and human rights activist Hayley Kiyoko, body positive advocate Mama Cos, and Ericka Hart, a non-binary femme sexual educator. Benefit was unable to share the resulting lifts in engagement for the activation as it’s still underway.

These efforts tie back to the company’s Bold is Beautiful Project, the company’s female empowerment initiative that has raised more than $16 million for women’s charities since 2015, said Kramer. This May, Benefit will donate 100 percent of its brow wax proceeds to its Bold is Beautiful partners, which include for the first time Planned Parenthood.

“We’re giving our customers a reason to keep following us, to watch what we do,” said Kramer. “Product is important, but it’s important to us now that our customers know we care just as much about causes and driving awareness as we do about makeup.”