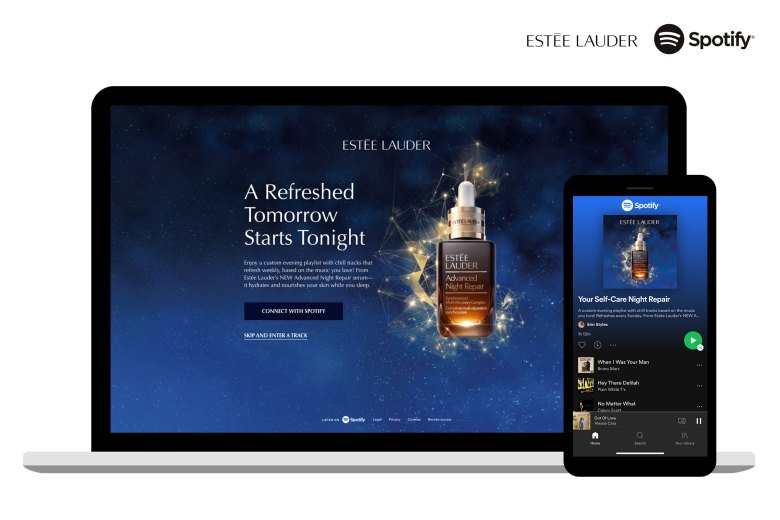 This week, I’m discussing the various ways beauty companies can engage with listeners, aka shoppers.

Though branded podcasts were the way that beauty companies thought about audio in 2018, beauty’s audio opportunities are far greater in 2021.

Between traditional audio ads, podcast products, Clubhouse and Twitter Spaces, there are more — and, seemingly, better — ways to engage with audiences than just branded shows. That’s not to say that more beauty podcasts aren’t launching. Olaplex launched its podcast, Beauty Uncovered, in March. And according to Spotify’s podcasting platform Anchor, Spotify has more than 7,000 podcasts in the fashion and beauty category. More than 4,000 of those shows launched just last year. Beauty listeners also streamed beauty podcasts more in 2020; Spotify saw a 130% increase in category-specific listens year-over-year. But larger brands are seeing more bang for their buck via the ad route.

Maria Somalya, Nars U.K. marketing director, called the activation “one of our most successful media campaigns in the U.K. and by far the best performing sampling campaign, with 32,000 redemptions in 15 days, smashing opt-in benchmarks.”

“The pandemic has hit the beauty industry hard, and the makeup category has had the most significant downturn. However, Nars has shown strong resilience, and we have gained market share in the U.K. premium beauty category.  We have been incredibly agile in our approach, and the Spotify campaign is a testament of our adaptability, creative thinking and digital-first mindset,” said Somalya. Nars U.K. and Spotify did not share the cost of this campaign.

Annie Evans, category development officer for CPG at Spotify, underscored the importance of engaging with consumers and testing products in one’s home during the Covid-19 pandemic.

“In reality, the future of commerce is everywhere, even in voice,” said Evans. “At Spotify, we have consumers’ attention in all forms of audio. Connecting beauty brands with shoppers through a frictionless sampling experience is really where we see our platform being utilized in an unexpected way.”

In October 2020, Estée Lauder took the audio ad cue, as well, and launched its first-ever U.S. voice-activated sampling campaign on Spotify for its Advanced Night Repair Serum. It provided 20,000 available samples to listeners who requested product via their Google Home. Users were also able to access a personalized “New Beginnings” playlist based on their streaming history on Spotify; each playlist featured slower, sleep-inducing music, which refreshed weekly. Based on the success of the October activation, Estée Lauder followed that campaign with another for its Beautiful Magnolia perfume in April.

Evans shared that, in March, 16 million cosmetic buyers came through Spotify to purchase products. On average, this customer is spending up to three hours a day on the platform, with about 40 minutes a day streaming music as part of their “Get Ready” routine.  Given that testing and sampling have still been curtailed in many beauty stores, brands like Nars U.K. and Estée Lauder understand audio ads allow consumers to try products in a targeted fashion. But ads alone aren’t the only way to engage listeners, Evans underscored that there is a whole content opportunity in audio, much like magazines of yore.

Custom product
While audio ads might be low-hanging fruit for beauty brands, custom products mimic what magazines once did with diffusion lines. Just think of Martha Stewart Living’s range of home products. In April, Lauryn Bosstick of The Skinny Confidential podcast launched her Skinny Confidential-branded beauty product line. While Bosstick had collaborated and partnered with brands in the past — 2,000 units of an Elemis and Skinny Confidential beauty bag sold in three hours on Elemis’ website — she saw a greater “content marketing opportunity.”

“The podcasting industry [now] is where blogging was in 2010,” she told me. “I’m not surprised that [podcasters] haven’t launched [products] yet, but I think they will launch down the line. It’s important for a blogger or a podcaster to refine your intention. Slapping your label on stuff, like a random T-shirt, is not going to work.”

Bosstick said that traditional cosmetics like lipstick and foundation were never going to be her focus since her female millennial audience is more interested in what she calls “beauty wellness.” For the April launch, Bosstick honed in on lymphatic drainage with the launch of a facial roller and oil. Though that may seem niche, she has 20 other products in development. Popular guests on her show have also been experts, like Dr. Dennis Gross and his knowledge on clinical skin care. Much like Bosstick’s Skinny Confidential brand, companies have the opportunity to create custom products and bundles as entry points to a larger brand story. For Bosstick, she believes products can further engage and deepen relationships with listeners who tune into her show or read her blog on a semi-regular basis.

Newer platforms
As made clear from the pandemic-filled 2020, audio’s power for brands goes beyond streaming podcasts or music and traditional radio. Though Clubhouse was expected to be a networking and social outlet for tech founders when it launched in April 2020, beauty insiders started pouncing on the app in droves last fall.

Beautycon’s Moj Mahdara, E.l.f’s Kory Marchisotto and Glow Recipe’s Christine Chang are just a few of the executives who are regulars on the app. At first, it seemed like Clubhouse would strictly be a B2B vehicle for these executives and emerging leaders to share stories and for users to get a behind-the-scenes peak at their careers. But with influential people like Tomi Talabi, founder of The Black Beauty Club, fueling more organic and curated discussions, the B2C opportunity clearly presented itself.

Nars U.S. started a three-part weekly Clubhouse series in April to engage with listeners beyond first-party communications. Julia Sloan, Nars svp of global marketing and integrated communications, said Nars preferred to hold a series versus a branded room so conversations would not be “dominated by Nars executives” or be “commercial.”

But users may be experiencing Clubhouse fatigue: according to Sensor Tower and reported by Reuters, downloads have fallen from 9.6 million in February to 2.7 million in March and 900,000 downloads in April. Still, Clubhouse is trucking ahead; it launched its Android version of the app this month.

Twitter Spaces is also expanding, Last week, it expanded its audio feature, which first debuted as a reaction to Clubhouse in December, to all accounts with 600 or more followers. Like Clubhouse, Twitter Spaces will be offering monetization opportunities for hosts in the coming months through Ticketed Spaces. Ticketed Spaces will allow creators to “earn the majority of the revenue from ticket sales and Twitter will keep a small amount as well,” according to a Twitter spokesperson. Still, it’s a wonder if listeners will pay for these features when, until now, these discussions have remained free of charge. Clubhouse, for its part, offers three types of sponsorships, including branded rooms, shoutouts and co-hosting or interviews.

Twitter remains bullish. In its latest Beauty Report, it shared that #BeautyTwitter saw over 118 million Tweets in 2020. Fifty-four percent of those conversations are being driven by Gen Z. Stacey Minero, global head of Twitter Arthouse, an initiative that connects creators to brands, said Twitter is a place “where younger audiences are coming to connect with their favorite beauty creators, and have a conversation with each other about skin care, about cosmetics and about new love, and where they actually can bring their authenticity to those conversations.”

She continued, “It is a place where we see beauty creators show up and bring their entire selves to the platform. It’s not just about posting tutorials or tweeting about products, but [it’s also about] sharing more playful moments and weighing in on things happening in the world.”

The social audio platforms space is getting more crowded: In mid-April, Facebook announced its own Clubhouse-style live audio rooms and a way for users to find and listen to podcasts. Peanut, a women-only social network that launched in 2017, launched Pods, its audio feature in May. Rather than focus on exclusivity, Pods is meant to give its 2 million users access to real-time conversations. Peanut founder and CEO Michelle Kennedy said in its first week of launch, its community members, known as Peanuts, spent over 10,000 hours in Pods. “This figure is a strong indication that this feature is so needed and that women are craving synchronous connection,” she said

But Twitter might be on to something to distinguish itself: curation. For Spaces’ broader launch, Twitter partnered with category-specific creators. For beauty, that included Sean Garrette, Nayamka Roberts-Smith, known as “The Internet’s Esthetician,”  and Jackie Aina, along with four other influencers. In the last weeks, Minero said that beauty conversations on Twitter have been centered around “the science of skin care” and “debunking myths.”

“We’ve got our go-to beauty creators. We probably gave about 20% of access to Spaces to working creators, so it’s definitely a top priority for us to support and enable this [kind of] conversation on the platform,” said Minero. “We feel like it is differentiated, relative to other platforms.”

And, indeed, it is. Because news and cultural information is already disseminated on Twitter, Spaces allows people to stay within that same ecosystem to discuss those topics. Minero believes there is a place for brands to participate, namely in thought leadership and business conversations. But, she said, “brands should be experimenting with listening to consumers and hosting conversations that are interesting and thought-provoking, not necessarily product-centric.”

For now, that just might be easier to do on Spaces than Clubhouse or Facebook, because existing Tweets can serve as inspiration, rather than thinking of a new subject to discuss in a vacuum. “You can use a tweet to draw to a Space, you can tweet into a Space, and can post three tweets at the top of the Twitter space as an anchor to the conversation,” she said. “That then becomes an inspiration for the conversation, and that’s a huge differentiator. The discoverability of it and the connection to culture and the conversations already happening make it highly relevant.” –Priya Rao with reporting from Liz Flora

E.l.f. is launching its Twitch channel with a contest.

The Kardashian-Jenners reshaped the beauty industry.

In first-quarter 2021 earnings, Revlon announced its latest turnaround plan, with a focus on namesake, iconic brands.