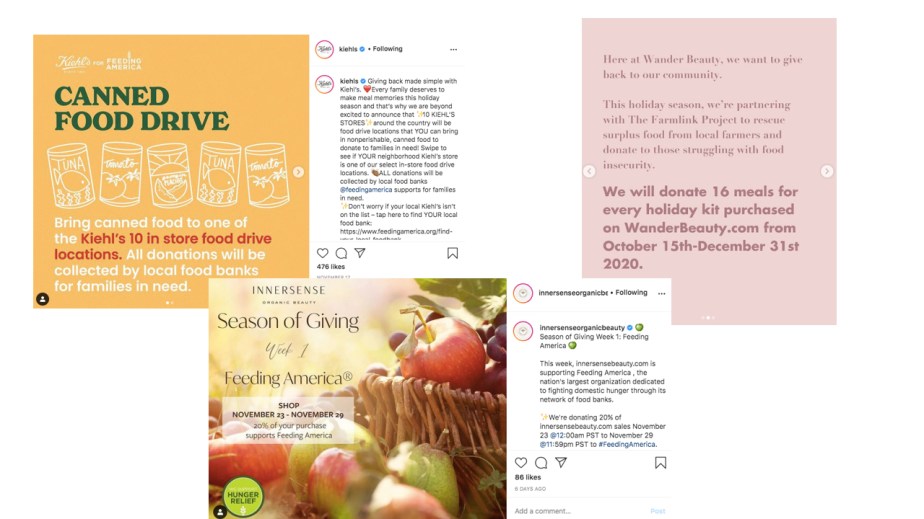 Beauty brands turn to cause marketing for pandemic holiday season

Following a deluge of Black Friday and Cyber Monday deals, Tuesday marks the day when brands aim to show consumers they are giving back.

As Giving Tuesday has gone from an anti-consumerism event to a cause-based marketing opportunity, companies are adapting their corporate social responsibility initiatives for a holiday season like no other in the U.S. The combined economic crisis and ongoing pandemic means that brands are being extra sensitive in their messaging and stretching beyond Giving Tuesday with season-long initiatives, ensuring that CSR lines up with their holiday campaigns.

“We’re in a very trying time, and we as co-founders have been thinking about what started out to be a health crisis, which evolved into an economic crisis, has evolved into a humanitarian crisis,” said Divya Gugnani, the co-founder and CEO of Wander Beauty.

Wander Beauty is incorporating a charitable gifting component to its holiday campaign for the first time this year. For every purchase of its holiday beauty kit between October 15 and December 31, the brand is donating 16 meals to The Farmlink Project, a nonprofit that is donating unsold food from farms to food banks.

“We don’t want to stand on the sidelines,” Gugnani said.

Brands are increasing CSR efforts as Covid-19 cases skyrocket and an economic crisis grips a large portion of the public. Feeding America predicts that 54 million Americans — roughly 16% of the entire population — now face food insecurity. Food banks across the U.S. have seen such a surge in demand that some have had to ration food.

Consumers have long expected brands to become more charity-minded. According to Mintel data from 2018, brands’ charitable giving influences the purchase decisions of 73% of American consumers.

When it was first created in 2011, Giving Tuesday was held on Cyber Monday as an anti-consumerist campaign to encourage people to donate to charities rather than compulsively shop. But it was later moved to the more shopping-friendly date of the Tuesday after Cyber Monday, and brands have gotten on board.

“CSR has taken on a whole new meaning this year, and it’s been fueled [by] the onset of the pandemic,” said Greg Starkman, the co-founder and CEO of clean hair-care brand Innersense Organic Beauty. The brand re-launched its annual holiday giving campaign this year on November 23 by offering 20% of web sales profits to Feeding America. It will be donating to a different organization weekly through December.

Kiehl’s launched its seventh year of its holiday campaign for Feeding America on November 16. It’s hosting a food drive in 10 physical stores through December 30 and selling two holiday gift sets that donate $1 from each sale to Feeding America, with a minimum donation of $100,000.

These gift sets “have been extremely popular,” said Melanie Green, the vice president of integrated communications at Kiehl’s. She added that the brand’s holiday charity campaign “has consistently been one of the most popular things that we ever do [as a] brand,” in terms of social engagement.

Other brands donating to Feeding America for Giving Tuesday include Wldkat and The Verticale. Meanwhile, Hero Cosmetics is donating to No Kid Hungry, Meejee is donating to Salvation Army, and Colleen Rothschild Beauty is donating to the GiveDirectly’s Project 100+ program.

In addition to food insecurity and poverty alleviation, health-care workers are another big focus for holiday this year as the second wave of the pandemic strains the hospital system. L’Oréal Paris is adding a “Covid-19 Hero Award” to its annual Women of Worth Awards this year, using Giving Tuesday to announce online that it will be giving an award to Patrycja Golak, a social worker who founded the Mask2Mask organization that gives self-care services to health-care workers. Other brands donating products to health-care workers include Lancôme and Codex Beauty.

But this year, companies have been especially careful about striking the right tone. “After everything that happened throughout this year, we are being more sensitive than ever,” said Green. Kiehl’s is promoting its campaign by working with influencers to post about their “meal memories” of the holiday season and asking customers to do the same. “It’s always something that we talked about with Feeding America team, because [the risk] is: ‘How do you put out content and talk about, for example, the meal memories — and how do you not make it look privileged? We are very very in lockstep with Feeding America to make sure that they’re very happy with the tone, as well.”