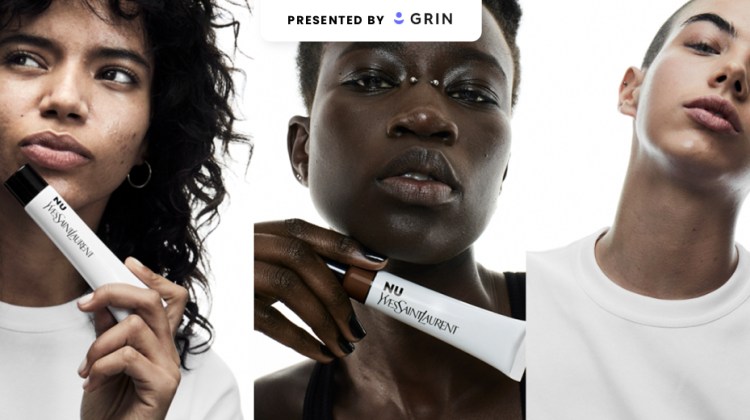 “I love when brands reach out to me and they’re very diverse. I’m obsessed with that, and that’s so important in the world today,” said Rickey Thompson, influencer and newly named ambassador for YSL Beauty’s Gen Z-driven collection, Nu Collection. Thompson, 25, has 5.4 million followers on Instagram and 2.8 million followers on TikTok.

The collection is the brand’s first foray into the growing category of skin care-makeup hybrid products, and was “created to embrace the texture, tone and signature features of its user,” said Laetitia Raoust, gm of YSL Beauty. Thompson, for example, is not a regular makeup wearer but loves the Bare Look Tint because it’s “you can hide your imperfections but still look very natural, which I’m obsessed with.” At $38, it’s cheaper than typical YSL complexion products. The brand’s Touche Eclat All-In-One Glow Foundation is $48.

Thompson is just one of the Gen-Z ambassadors YSL tapped for the launch. He’s joined by influencers including artist and YouTuber Chella Man, who’s 22-years-old and has 479,000 Instagram followers, and model Sirena Warren, who’s 20 and has nearly 39,000 Instagram followers. In the teaser video for the collection — which YSL Beauty posted on its Instagram, in snippets — voiceovers condone an embrace of imperfections, in true Gen-Z fashion. “You see these freckles?” one voice asks, followed by others stating, “beauty marks,” “my melanin,” “dark circles,” “scars,” and “natural glow.”  The music amps up, then: “It’s a reminder of where I’ve been.” “I was born this way.” “But I own it because it’s a part of me.”

“Authenticity, inclusivity and freedom of expression have always been at the center of YSL’s DNA,” Raoust said. “Mr. Saint Laurent created a house devoted to celebrating individuality, allowing women to wear whatever they want and, most importantly, feel confident and comfortable in [their] own skin. We brought that same thinking into this new generation of products that are focused on enhancing, rather than hiding, our consumers’ unique beauty signatures.”

The press book for Nu Collection specifically speaks to the tenets that Gen Z popularly values and is designed for a digitally savvy audience. For example, products are labeled with QR. “Dear Gen Z, You’re not just a pretty face. You care about important things. So do we,” it reads. And it notes that Nu Collection delivers: “Diversity. Inclusion. No BS.” as well as “Clean formulas. Responsible sourcing.” It’s also “Recycled or nothing.”

In addition to the Bare Look Tint, the collection’s five products include a Glow In Balm, which is an oil-in-water formula with light-reflecting pearls; a Blotting Lotion, which is mattifying; a Tone Corrector, which is a color corrector available in three shades; and a Dewy Mist, which is a multitasker that can go under or over makeup. The Nu Collection ranges in price from $34-$38. All of the products are for the face; the collection does not yet include  eye, lip, or brow-specific products.

To promote the launch, the brand wanted to create an authentic community of ambassadors who “embody this new generation of beauty,” according to Raoust. The result is a group of “40 incredible talents who use their voices to speak with their generation, while letting their individuality shine,” Raoust said, adding, “[Thompson,] with his playful, unapologetic energy and his authentic self-ownership, fits naturally in this crew!”

Thompson first gained a following on Vine, before the micro-video app shut down in 2016. A repost from Kylie Jenner in 2014 helped him amass a following while he was still a teenager. Today, Thompson is pushing past the reputation he’s established as a digital comedian of sorts, as he pursues modeling and acting. “It’s been a goal of mine to work with YSL ever since I was about 13. I was like, ‘One day, I’m gonna book something with them. I know I am.'”

Gen Z might value sustainability and diversity — but a little bit of luxury, it turns out, can be a good thing, too.