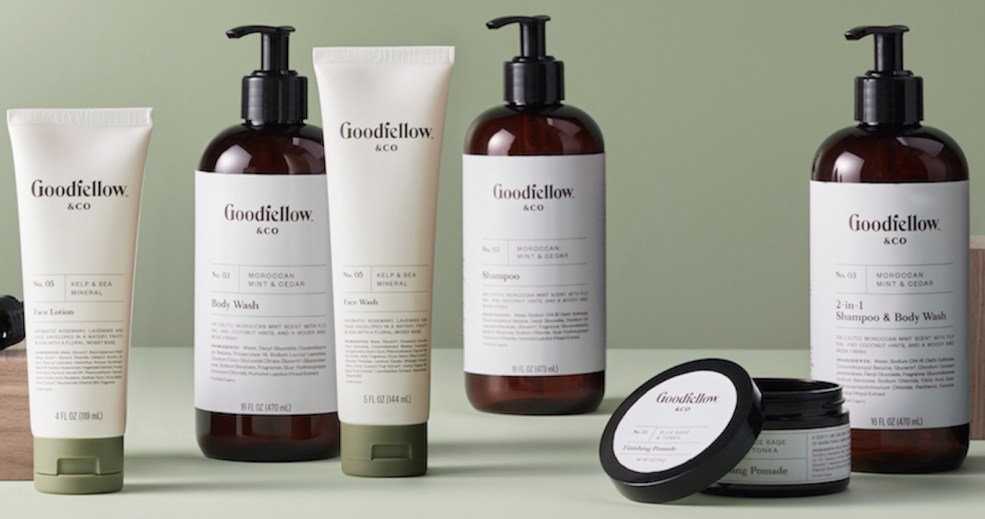 Target continues to see opportunity with its men’s shopper.

In late May, the retailer quietly announced its plans to spin off its nearly 2-year-old, private-label men’s fashion brand, Goodfellow & Co, from a pure apparel line into grooming. Mark Tritton, Target evp and chief merchandising officer, described the lifestyle extension as a way to become a “one-stop shop” for male customers.

“We’ve seen a new level of demand for specialty, premium products,” said Tritton. “Goodfellow & Co grooming was created to better meet that demand with products we can ensure are effective and affordable.”

The line’s 30-plus products, including body washes, beard oils and fragrances, retail from $3.99 to $16.99. The products will have dedicated end-caps and table displays within Target’s grooming department but will also be merchandised with the Goodfellow & Co fashion line in the apparel sections of Target stores and on Target.com.

While private-label beauty and personal-care brands are gaining traction at a rapid rate – according to Nielsen data, private-label brands are posting dollar growth of three times the rate of national brands — they are often done with a third-party manufacturer. This is Target’s first pure private-label beauty move — however, it expanded its Cloud Island baby apparel and accessories line into its Essentials category (i.e., diapers, toiletries and baby wipes) in January 2019. In the past, Target relied on vertically integrated CPG company Maesa to develop its Kristen Ess brand in partnership with the hair stylist. The line is expected to hit $100 million in retail sales in 2019. The same practice is typically true of fashion lines moving into beauty: Though the YSL fashion brand is owned by Kering, YSL Beauty is part of L’Oréal. Likewise, Calvin Klein ready-to-wear is under PVH, but its fragrance division is part of Coty’s purview.

The Goodfellow & Co fashion line is expected to hit the $1 billion mark by 2020, according to the retailer. Until now, Target has largely relied on digitally native brands, like Harry’s, Bevel and Rebel’s Refinery, to add newness to its beauty, grooming and personal-care categories. According to a Target spokesperson, its premium beauty category, which Goodfellow & Co grooming will be a part of, experienced 40% growth year over year. Seemingly, Target now feels equipped to create buzz in beauty all on its own.

“The decision to create this range under a private label is beneficial for generating a higher margin than branded product. Target will also have the ability to control the product offering and create exclusivity for their customer,” said Kayla Marci, Edited market analyst. “This move for Target is relevant and well-timed, with the burgeoning growth of beauty, skin care and wellness categories becoming more inclusive toward male customers. Companies like Goop have made a move to establish themselves within this field, as has Birchbox [with its] rebrand of their men’s grooming line.” Per Euromonitor International, the men’s beauty and personal-care market was valued at $8.7 billion in 2017.

“They now have learned the startup playbook and how that can be a draw for younger customers, especially with sleek packaging and affordable prices,” said Thomas Sineau, CB Insights senior intelligence analyst. “Since Target has massive distribution capabilities themselves, why wouldn’t they capitalize on that and own it from start to finish?”

According to Rakuten Intelligence, 45% of direct-to-consumer spend comes from customers under age of 35. By adopting the DTC design and affordability angle for Goodfellow & Co grooming, Target is well-poised to steal market share from both national and DTC brands.

“Traditional brands had gotten comfortable with the idea that private label was going to peak out, but we’ve seen some important changes in the market showing there is not a natural ceiling to private label because the quality has been elevated substantially,” said Ken Cassar, vp and principal analyst at Rakuten Intelligence. “Consumers are willing to try new brands and they believe in private label, which could be traditional brands’ worst nightmare. DTC brands have enough growth ahead of them, so they may not be worried about this today, but they should be concerned because digitally native brands are going to have to adopt the tactics of traditional brands and use promotion and price incentives as they get bigger.”

For now, a Target spokesperson said, the company has no plans to create its own private-label beauty brand for women or to spin off a women’s fashion line like A New Day or JoyLab into cosmetics or skin care. But Cassar sees that as an obvious opportunity. “I would be amazed if Target didn’t try to take this concept to women, and even possibly children, because they have that brand equity and they should leverage that,” he said. “But it will be harder to do with women, because there isn’t that low-hanging fruit that exists in beauty like it does with men.”