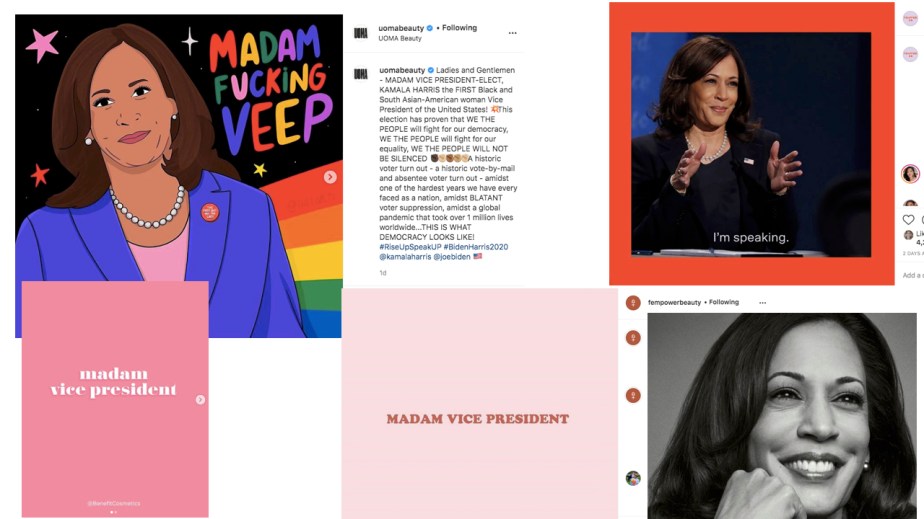 As American cities were filled with dancing in the streets to celebrate Joe Biden’s presidential election victory on Saturday, beauty brands took a break from influencers and models to honor Vice President-elect Kamala Harris.

Posts celebrating incoming “Madam Vice President” Harris peppered beauty labels’ Instagram feeds over the weekend. This marks a change from many brands’ voter turnout campaigns, which had mostly remained non-partisan before the election.

“The last four years were a very dark chapter of American history,” said Uoma Beauty founder Sharon Chuter at the annual Glossy Beauty Summit on Monday. “For us, this is such an important moment, and I couldn’t stay silent.” She added, “I’m very excited because Kamala is literally the definition of the American dream.”

Uoma Beauty had encouraged voter turnout from a non-partisan perspective on its brand account, while Chuter was a vocal advocate for Biden and Harris on her personal social media accounts. Many other beauty founders took a similar approach. Glossier’s Emily Weiss, for example, posted in support of Biden and Harris on her personal account both before and after the election, while the brand sponsored a non-partisan voter turnout campaign in partnership with Michelle Obama’s organization When We All Vote. On Marc Jacobs Beauty’s non-partisan post promoting voter turnout, designer Marc Jacobs commented from his personal account, saying, “Mega pay off!”

Fempower Beauty, a feminist makeup brand founded in the wake of the 2016 Women’s March, explicitly endorsed the Biden-Harris ticket on its social media for its voter turnout campaign. It posted throughout the weekend celebrating the Biden victory, including a post about Biden’s acknowledgement of transgender people, and a pink post celebrating the first “Madam Vice President.”

“It feels like we’re moving forward into this really possible equality. There’s this sense of hope and optimism,” said the brand’s co-founder Christina Basias.

Other female brand founders were also glad to hear of the outcome of the election. “Frankly, I was relieved,” said Tower 28 founder Amy Liu. “I feel like we can finally exhale and move forward.” Laney Crowell, the co-founder and CEO of Saie, said she “cried happy tears, and felt an overwhelming sense of joy and relief.” Deepica Mutyala, the founder of Live Tinted, said she felt “a level of joy that I didn’t even know was possible,” adding, “as a South Asian woman and entrepreneur, I had felt connected to Kamala since the beginning.”

For brands that had remained non-partisan in their voter turnout campaigns, the decision to celebrate Harris was about marking the historic nature of her win.

“For us, it was really the moment of celebrating a woman being in the White House, in the position of being a vice president. It’s a historic moment for all of us to rally around, even from a non-partisan perspective,” said Benefit Cosmetics associate director of social and PR Angela Purcaro.

Alleyoop, which received a pledge from 10,000 people that they would register to vote as part of its non-partisan campaign, posted a photo of Harris with the caption “Madam Vice President,” circling “Madam.” “Looking outside of the lens of politics and parties, this was something worthy of celebrating,” said Alleyoop co-founder and CEO Leila Kashani. April Gargiulo, founder of Vintner’s Daughter, said her brand shared a celebratory post for Harris because, “Regardless of political affiliation, having a woman elected to the White House is a huge milestone and one that we felt it was important to pay tribute to.” Sheena Yaitanes, the founder of Kosas, said that “For a woman-led brand, the news about the first-ever female vice president-elect is culturally relevant.”

The posts celebrating Harris are generating high engagement for brands. Benefit Cosmetics received over 26,500 likes on its post about Harris and Vintner’ Daughter received over 5,500 likes. Benefit’s post was among its recent most-liked, while Vintner’s Daughter’s previous post likes were generally in the hundreds.

Some commentators have been saying that those who didn’t openly endorse Biden-Harris should not be capitalizing off the victory now that they have won. Regarding celebrities like Kim Kardashian posting celebratory posts, Popsugar associate editor Karenna Meredith said in an op-ed, “There were pushes to register, to perform your civic duty, to make sure every vote is counted. In elections past that might’ve been enough. But in 2020, those efforts don’t cut it. We’re battling for Black lives, for the LGBTQ+ community, for affordable healthcare, for a path through a deadly pandemic.”

Larger brands that posted to celebrate Harris, like Benefit Cosmetics, did so despite backlash from Trump supporters. According to Purcaro, the brand’s response to the political polarization is to keep its Instagram an “open forum where people can share their thoughts” while removing hate speech.

Smaller independent brands with an activist identity like Fempower and Uoma, meanwhile, have received overwhelmingly supportive comments for their election celebration posts.

“Our value system is aligned with the Biden-Harris campaign,” said Alexis Androulakis, the co-founder of Fempower Beauty. She said the brand’s vote campaign “was very much about encouraging voting, but our audience — if we’re real about it — are the ones who are voting for Biden-Harris, because the values are so aligned.”

Androulakis noted that larger brands have been more reluctant to support a specific candidate. “A brand with a million followers may not be vocal about who you should vote for. But at least they’re using their reach to celebrate womanhood and femininity, in whatever context it makes sense for their brand.”

In 2016, it was the fashion world that especially came out in support of Hillary Clinton, with several designers including Diane von Furstenberg, Tory Burch and Prabal Gurung creating pro-Clinton merch for her campaign. While some fashion designers like Ralph Lauren have been willing to be associated with Melania Trump, beauty labels have largely steered clear of the outgoing Republican first lady over the past four years. Generally, brands have been more willing to align with Democratic female political figures. For 2020, The Lip Bar teamed up with Michelle Obama for a signature lipstick in its voter turnout campaign.

Harris, who the Telegraph called the “modern beauty icon the world needs,” is also a role model from a beauty perspective, said Androulakis. “Her lashes were on point; her everything was on point. I do believe that women have it so much harder, in terms of how to present in power.”