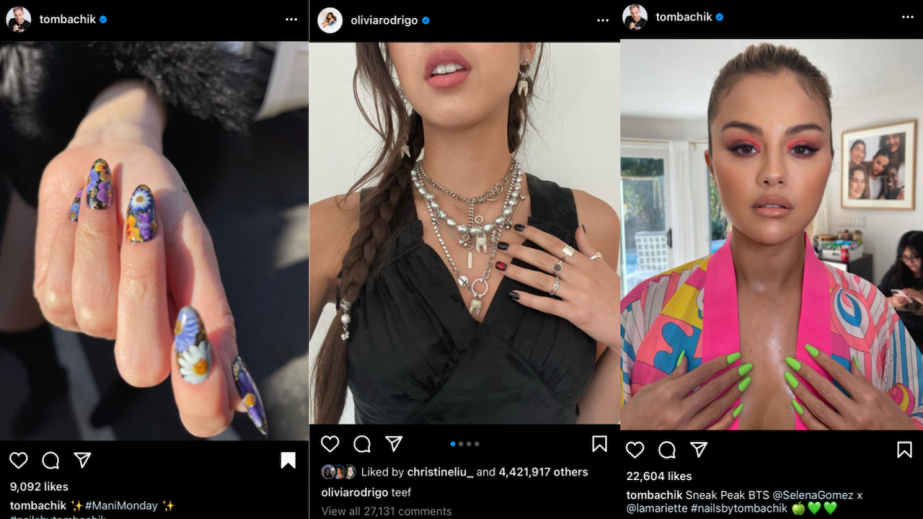 Tom Bachik is the choice nail artist of celebrities including Selena Gomez, Olivia Rodrigo and Jennifer Lopez. However, while growing up, his passions were more around Shaun White than colorful nails.

“The plan was to open up my own studio and custom paint racecar helmets and hockey masks and jet skis,” said Bachik. He turned to the growing nail industry in the early ’90s when he was expecting his first child and wanted more financial stability. Learning to became a nail technician “was hard, but I love challenges,” Bachik said.

Bachik started his career in nails by learning to do acrylic nails, which were “all the rage” in the ’90s. From there, he witnessed the evolution of nail art firsthand.

“Nails definitely follow fashion and follow the trends of what’s happening in fashion,” Bachik said. Minimalistic French manicures of the ’90s took a sharp turn from the nail art-heavy ’80s, characterized by airbrushing and “bling.” Now, nail art is seeing a resurgence, as a result of Covid, said Bachik.

“People had time at home to play with their nails. And they wanted something fun to lift their spirits,” he said.

As for the current nail trends, Bachik said there is no one-size-fits-all look. But, he said, “Everyone wants a little bit of nail art.”

“It’s either ornate and crazy, or it’s simple. It’s pops of color, metallic accents, unique French nails, or a little gem or rhinestone here and there, just to give it a little bit of bling,” he said.

Bachik shared with Glossy which nail trends his celebrity clients are wearing and what he’s doing to match their “vibe” to their nail look.

Bright colors and abstract patterns
“A lot of [current nail trends] have to do with summer. It’s the color and the brightness [that] make you happy,” said Bachik.

Selena Gomez, one of Bachik’s long-time clients, has not shied away from colorful manicures in the past. Most recently, she sported the look in her photoshoot for La’Mariette, her new swimsuit line.

While Gomez’s swimsuits heavily feature colors like pink, orange and blue, Bachik went with neon green nails. “I wanted to make the nails “pop, but yet tie to the whole look,” said Bachik. “I try to [do] what’s going to be a little unexpected.”

Other patterns that are blowing up include “flowers on each nail and small flowers covering the whole nail,” Bachik said. “Those are designs that just make you feel good.”

The modern French
The ‘modern French’ manicure is another popular form of nail art that can be as fun or as subtle as a client wants. It often features both bright colors and “matching pastel colors,” Bachik said.

“The younger girls want a lot of it [nail art], or they want it super bright. My older clients are more about simple versions of that,” he said.

Most importantly, he said, is honing in on the “emotional connection” that nails are tied to, based on clients’ personalities.

“Charlize [Theron] was all about, ‘Give me something fun. It’s summer, and vacation’s coming, and I want something cute and fun,’” Bachik said. He gave her a subtle twist on the classic French manicure by switching out the white tips to pops of neon on the corner of each nail.

“We did every nail in a different color on Selena [Gomez]. With Heidi [Klum], we just did the tips. And with Charlize, we did just the corners. It varies, depending on their personality and what the occasion is,” Bachik said.

Press-on nails
For Olivia Rodrigo’s debut album, Sour, Bachik again focused on making sure her that “nails tell her story.” The manicure sported by Rodrigo in her album’s cover art features black-and-white “checkerboard” nail art, as a nod to the pop-punk, grunge sound of her music.

“Nails are the exclamation point at the end of the sentence,” said Bachik.

For music videos and red carpets, Bachik has been a longtime fan of press-on nails to provide his clients with a custom look for a short period of time. “I could actually create the looks on the clear tips ahead of time, [rather than spend] 3-4 hours doing a crazy set of nails on-set,” said Bachik.

Most recently, Bachik has partnered with imPRESS Press-On Manicure.

“They’ve got so many designs, and they’re really good about being on-trend, with pops of colors, small floral prints, modern French manicures nails,” said Bachik. Jess Conte x ImPress Press-On Manicure Birthday Collection is the brand’s newest collection of press-on nails and allows people who may not be able to afford a session with Bachik to keep up with nail trends. It features “hot” colors like sage green and baby blue, as well as floral, polka dot and French manicure patterns, he said.

“It appeals to the mass market; people love to follow Instagram and Pinterest accounts [featuring] crazy nail art,” said Bachik. “But they don’t necessarily want to wear it themselves.”

But with the right manicure, “It’s almost like someone’s whole confidence changes,” said Bachik. “It’s so cool to watch that happen.”