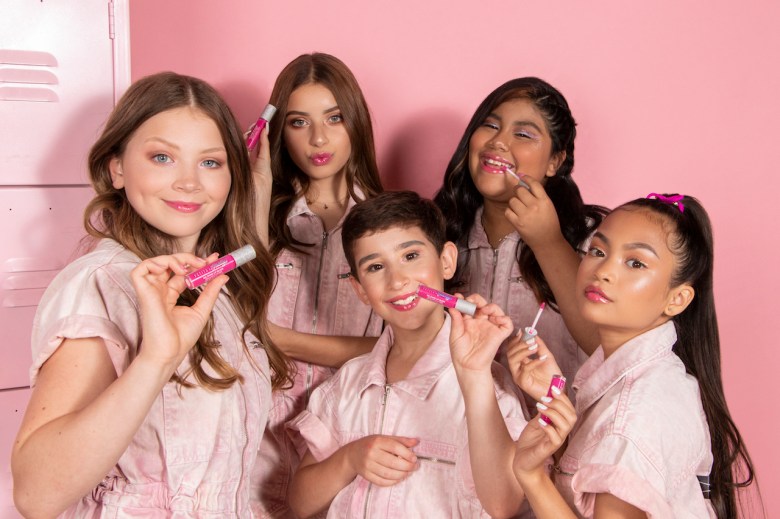 Inside the rise of tween and teen makeup

As beauty brands begin to shift their product and marketing focus from solely millennial shoppers to Gen-Z, the tween makeup space is beginning to take shape.

On one side of the spectrum is Petite ‘n Pretty, a prestige color cosmetics line that is geared to makeup-loving 4- to 18-year-olds. And on the other is LYF that stands for Love You First. The new line landed in 250-plus Target stores earlier in the month under the retailer’s Clean assortment. It is a modern take on age-appropriate brands of yore like Bonne Bell and Lip Smackers, which were acquired by Markwins in 2015, and builds on Target’s success with private-label line More Than Magic, a lifestyle assortment for tweens and teens that offers beauty, personal care, apparel, stationary and electronics. According to a Target spokesperson, More Than Magic’s beauty assortment has seen incremental growth, despite the brand being just under a year old.

More Than Magic and LYF are made-for-wholesale brands (LYF is a spinoff of its prestige sister line, RealHer, that is sold at Neiman Marcus, Macy’s and HSN), but Petite ‘n Pretty opted for the DTC-first approach when it launched in summer 2018.

“This was a very new category within beauty, and it was really important for us to test our messaging and see what was working with moms and then what was working with our young, creative girls,” said Samantha Cutler, founder and CEO of Petite ‘n Pretty. “We had to speak to both audiences directly but also divide the way we did that in an authentic way.”

For instance, mothers cared that Petite ‘n Pretty was pediatrician-approved, cruelty-free, paraben-free and nut-free. The latter has become a growing concern, especially in schools as of late, said Cutler. “Mini MUAs” on YouTube and other influencers, however, cared that the product looked like real makeup they were seeing on social media platforms, according to the company’s internal research.

After launching with a DTC model, Petite ‘n Pretty entered 488 Ulta doors as part of the retailer’s second phase of Sparked, its up-and-coming brand spotlight program, in November 2019. (The line also sells on Neiman Marcus, as of last year.) While Millie Bobby Brown’s Gen-Z Florence By Mills brand, which includes both skin care and makeup, is merchandised near Petite ‘n Pretty in Ulta locations, the latter is focused on a true makeup look and not skin care. Prices, meanwhile, are top dollar. For instance, a six-shade eye and cheek palette is $34. Since launching with wholesale partners, Cutler said that Petite ‘n Pretty has seen 700% year-over-year sales growth.

This is despite the fact that “self-reported” teen spending has decreased by 4% year-over-year since 2018, and cosmetics spending among teens, in particular, fell by 20% to a 19-year low, according Piper Jaffray’s fall 2019 findings.

Still, Caitlin Strandberg, principal at venture capital fund Lerer Hippeau said the tween and teen makeup category is gaining steam because the consumer base is ready for more.

“When you are a 5th, 6th, 7th or 8th grader, it’s the beginning of that first wave of experimentation,” she said. “Self-expression in beauty has been extended beyond a cleanser or a pink lip balm, and it’s acceptable. Young Gen-Zers are ready to try on a lot more than older Gen-Zers, and they can be playful while doing it.”

Target’s bet on growing its tween and teen assortment is about accessibility and affordability. LYF, for instance, stamps its products with inspirational phrases, and its products range from $8.99 t0 $14.99. LYF builds on RealHer in that RealHer was originally intended to have a Gen-Z audience, too. But because of its distribution channels and price point, which tops out at $38, the brand was reaching women well into theirs 40s and 50s. After meeting with Target’s beauty merchandising teams last year, Merid and co-founder Bill Xiang concepted a true Gen-Z brand with LYF, designed to be relatable for tweens and teens across the board, from its price to its non-toxic positioning.

“We wanted to create something for a different demographic that was very similar to RealHer in messaging and branding. It’s a line for girls who are just starting to play with makeup, at 12 or 13. As a 12-year-old today, you are bombarded with social media and having sensory overload, so we thought it was important to create a line that was about affirming young women,” said Megan Merid, LYF co-founder and vp of business development.

Because LYF uses the same executive team and warehouse infrastructure as RealHer, Merid said the company has been able to still use the $1 million investment it took to launch its sister brand. LYF is betting on Target for both sales and awareness, as RealHer has seen wholesale outpace its DTC business by 26%.

“With RealHer, we had to establish an office, a warehouse location, initial investment for all software, new hires, minimum order quantities for each [product]. For the original launch, we had over 40 [products], compared to LYF at 16, plus travel expenses for establishing new retail partnerships. With LYF, we have only one account to support, and an already seasoned team to execute strategy and marketing initiatives,” she said.

LYF’s marketing approach involves paid and unpaid campaigns with micro-influencers on social media, with an emphasis on YouTube. Merid would not disclose the company’s financial commitment to influencers or advertising. It is also in the midst of setting up an ambassador program, which will be commission-based. For now, it’s steering clear of direct influencer relationships with moms.

However, Cutler believes that Petite ‘n Pretty’s dual customer structure might be its secret sauce, especially since teen and tween influencers are in Petite ‘n Pretty’s campaigns and making event appearances in Ulta stores. These types of activations and deals arguably need parental approval. Petite ‘n Pretty’s Sparkle Squad — customers who, together, have 102,000 Instagram followers and 20,500 subscribers on You Tube — provide a way to facilitate conversations with cohorts and even grandmothers. Grandmothers, particularly those purchasing on Neiman Marcus, have looked to Petite ‘n Pretty for giftable items for Christmas and birthdays. According to the brand, branded YouTube videos receive anywhere between 25,000 and 165,000 views, and the brand’s followers on Instagram are growing 20% month-over-month. Average in-feed post engagement ranges from 5% to 7%.

“Millennials had parents who were part of the helicopter generation; they were scared of everything they did. But younger Gen-Zers have parents who are more open to being influenced,” said Strandberg. “They had to face certain truths about the internet early on, like cyberbullying and school shootings, so while a product needs to pass parents’ initial litmus test, the end product and marketing has to be for the teen.”