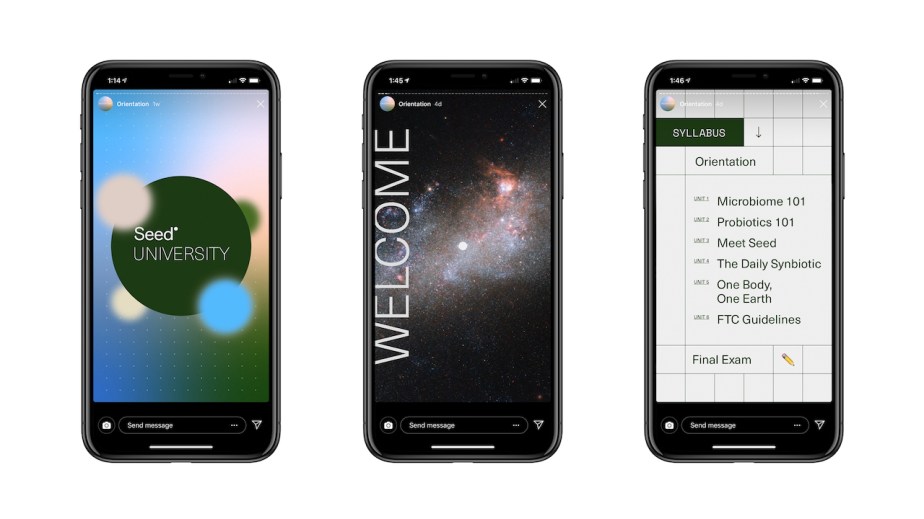 When direct-to-consumer, ingestibles brand Seed debuted its education platform dubbed Seed University for prospective ambassadors, it was its attempt to bring a safeguard to the influencer marketing space — particularly as it relates to wellness.

Seed sells a line of daily supplements called synbiotics, which are a mix of probiotics and prebiotics. They retail for approximately $50 a month. Because synbiotics are inherently more complex than, say, a new lipstick color or foundation shade and will affect a customer’s health based on an individual’s respective digestive system, Seed co-founder and co-CEO Ara Katz said it was imperative that the brand worked with influencers that were well-versed on the brand’s proposition to ensure there was no suspicious advertising, as it relates to both false marketing tactics and the pay-off related to sales conversion metrics.

Other supplement brands have reportedly paid ambassadors up to a $1 million per social post. SugarBearHair, for one, counts Kylie Jenner and Kim Kardashian West as influencers. Pricing continues to be a nebulous topic within the influencer marketing space, from both the brand and influencer perspectives, and many alternatives have popped up to combat alleged sponcon. For example, Sephora incubates its own ambassadors via Sephora Squad and marketplaces like Storr and Masse allow influencers to directly sell and recommend products for an affiliate cut, respectively.

“With every trend that has come up within wellness, there has been a fundamental misunderstanding with the science and efficacy of products because of poor communication,” said Katz. “Social platforms are great to connect with people, but there isn’t a monitoring system in place around truthful information.”

Seed University, which launched on June 25, includes a 59-minute Instagram Stories-based curriculum composed of an orientation and six subjects of study, like Microbiome 101 and Federal Trade Commission  guidelines. Influencers need to partake in these courses before taking a 10-question “final exam” at Seed.com. Seed has more than 36,000 followers on its brand Instagram account, and Seed University has just over 1,700 followers.

Katz said that nearly 1,700 individuals have registered for Seed University and that it plans to accept 100 to 200 influencers on a rolling basis, proving that influencers alike are hoping for rigor within the larger economy. Once vetted, ambassadors will receive a 15% base commission for being part of the Seed network and 100% of the profits from product sales, if they are not a part of any other larger influencer networks. Customers will be directed to Seed’s website where they will purchase its products via an affiliate link from social.

“There is zero trust between what is real and what is marketing. If I’m going to recommend something to my clients, I have to know the ingredients or why something would work for them, because supplements have a cause-and-effect relationship with one’s wellness. There are brands like the Perfect Bar, where everyone on the internet knows when they have an influencer budget because everyone is posting about them at the same time; it’s not because it’s a better product or because it is good for you,” said LeVeque. LeVeque has two other long-term brand partnership deals, with supplement company Now Foods and paleo-friendly brand Primal Kitchen.

“Probiotics and supplements have so much over-evangelism. Every yogurt or shampoo now is a probiotic, so if there can be a common denominator of trusted authorities, we want to be that place,” said Katz.