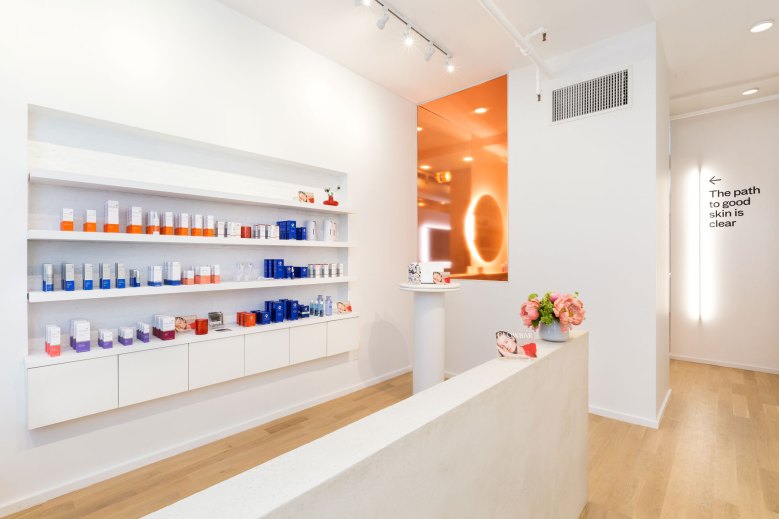 Launched in June, Glowbar was built on CEO and co-founder Rachel Liverman’s personal need for a results-oriented, clinical routine. “It really boiled down to three pain points as a consumer: time, trust and money,” said Liverman.

With that in mind, Glowbar only offers one 30-minute, custom treatment, which is at the intersection of a dermatologist’s office offering and one found at a spa. Each appointment begins with a short consult with an esthetician to map the personalized treatment, supplemented by a survey and an algorithm developed by Glowbar to determine the best treatment path. A treatment can include any combination of a chemical peel, extractions, dermaplaning, high-frequency and micro-current vibrations, and LED light, and there are only two price-points: $65 for a one-time treatment and $55 per monthly treatment with a membership.

Glowbar is highly focused on its membership program, which requires a four-month commitment. Through its membership, customers also get 10% off retail products, a guest pass to bring a friend with them for a treatment once a year, and perks like complimentary micro-treatments. At the moment, one-third of all customers who come into Glowbar sign up for a membership, and 75% are women.

Glowbar joins Heyday, Face Haus and Skin Laundry as one of many fast-facial options. While its one-time treatment is the same price as Heyday’s 30-minute service, the difference, Liverman said, is that Glowbar does all treatments in 30 minutes and does not charge incrementally. In comparison to Glowbar’s membership, Heyday has a three-tier membership, with prices that top out at $130 a month.

For now, Glowbar is straying from paid advertising. Instead, it’s been focusing on organic conversation and reach, leaning on its membership and social channels.“The best way to leverage our social channels is to educate on what we’re doing here and on skin care in general,” said Neha Govindraj, co-founder and COO of Glowbar. “It’s basically bringing a fact-page to life for people to interact with and get more questions answered, because the more they’re informed about it, the closer they are to coming in and taking care of their skin.”

In addition to its current Tribeca studio, Glowbar, which currently has 10 employees, will open its next location in New York in early- to mid-2020 and has plans to eventually open in other markets.