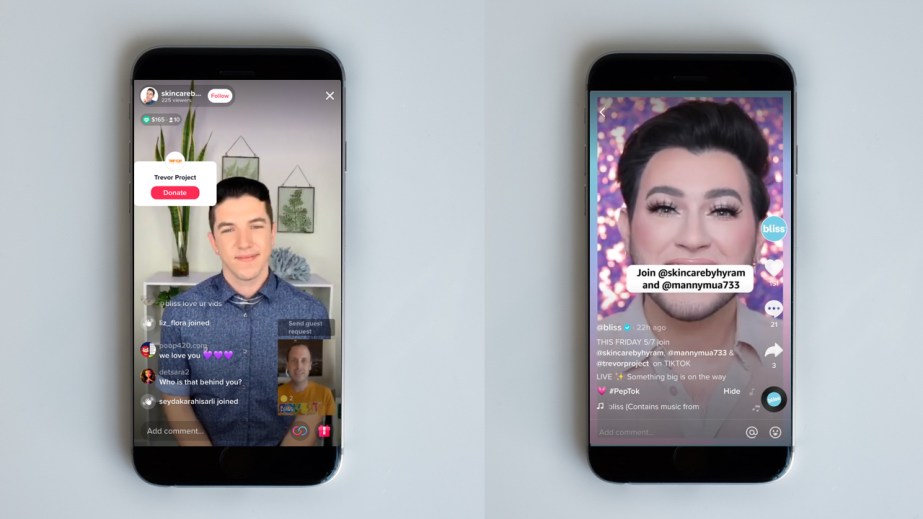 How Bliss tapped into TikTok for its Gen-Z evolution

Three years after its more youthful rebrand, body and skin-care label Bliss is doubling down on TikTok.

On Friday, the brand launched its second annual campaign with LGBTQ youth-focused nonprofit The Trevor Project. The campaign kicked off with a cyberbullying talk between beauty influencers Hyram Yarbro and Manny Gutierrez, as well as The Trevor Project spokesperson Chris Bright on a TikTok livestream. Called PepTok Live, the talk also helped promote Bliss’ fundraiser — for every positive comment posted tagging the brand, it will donate $1 (up to $100,000) to The Trevor Project. The campaign is being promoted by other influencers on TikTok including Chris Olsen, Avery Cyrus and Markell Washington.

The brand ran a similar campaign using Instagram Live last year, but opted for TikTok’s livestreaming platform for this iteration.

“TikTok has been a really wonderful platform for the brand,” said Bliss chief brand officer Tina Pozzi. “We’ve grown really fast, and we’ve seen a lot of engagement. We thought it would be the most culturally relevant place. It felt right to pick TikTok to talk about creating affirming spaces and about mental health, because there have been so many influencers who have been so outspoken on the platform.”

Bliss has been active on TikTok since February 2020. It currently has over 171,000 followers, and has benefited from TikTok influencers and the viral musical campaign playbook. Its #ThisisBliss campaign created by agency Movers + Shakers in September 2020 received 6.8 billion views on the hashtag, while it also enlisted top TikTok influencers for a #FindYourBliss campaign for its vitamin C serum earlier this year.

Founded in 1996 as a premium spa brand, Bliss regrouped in 2018, lowering prices and changing its retail model with a new focus on big-box retailers and drugstores. This accessible positioning has attracted younger consumers; its main age demographic is currently 18-34, said Pozzi.

“The opportunity for us to step into the masstige space” with retail launches in Target and Walmart and lower prices has “lowered the age demographic,” said Pozzi. This has coincided with new investment in product categories geared toward younger shoppers, such as acne in July 2020. Its new acne line was “where we really invested in media in a bigger way, [as well as] influencer marketing, knowing that that franchise would definitely skew younger,” said Pozzi.

The brand’s retail expansions have been a strong factor in courting Gen Z. “Amazon is a very important channel for them, it’s convenient,” said Pozzi. “They are demanding that convenience factor. And they’re still very [strongly] shopping at Target and Walmart, as well.”

She added that big-box distribution is not a problem for brand equity when it comes to younger shoppers. “There’s no longer that stigma at all,” she said. “These retailers focused on building themselves out as beauty destinations.”

Overall, Bliss will continue with its strategy that it has adopted during the pandemic. “We’ve definitely seen a lot of the consumer behavior stick,” said Pozzi. “Our consumer is slightly younger, so she’s definitely shopping online. That behavior is here to stay.”