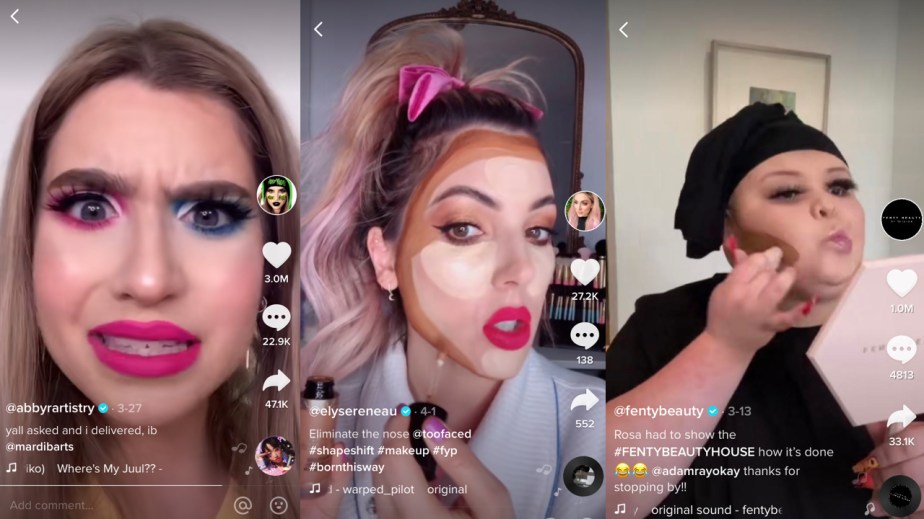 How beauty brands are navigating political activism on TikTok

TikTok started as a social media app for singing and dancing teens, but it is currently finding itself as an arbiter of social and political activism.

In the last four weeks, TikTok users have been creating and sharing Black Lives Matter and political protest content, while also amplifying other social justice information and, in some cases, organizing social justice trolling. At the same time, many beauty brands are stepping back and rethinking their TikTok strategies, so as not to make a misstep during this culturally sensitive moment. For example, Benefit Cosmetics paused its TikTok posting from May 30-June 15, as did Colourpop, Too Faced and Fenty around the same time period. Milk Makeup, meanwhile, posted in support of Black Lives Matter on May 30 and paused posts from May 31-June 16, and Eos posted in support of BLM on June 1. ELF posted about BLM three times between June 4 and June 6.

Soyoung Kang, Eos CMO, said it was never a discussion whether Eos should or should not put up a post on TikTok that supported Black Lives Matter. Given that the brand fully embraces TikTok as part of its social media strategy, posting about Black Lives Matter on June 1 simply made sense, she said. Eos also recently shared its employee diversity for the Pull Up For Change campaign (6% of its employees are Black) and closed its office in recognition of Juneteenth.

“TikTok is not just for [dancing and music],” said Kang. “It’s been interesting to see how young people are using the platform and creating more diverse content than what an outsider’s [expectation] of the content is.”

Kang said that, over the last month. she has started to see a lot of Black Lives Matter content, even on her own TikTok “For You” page.  She had also seen other types of social justice messaging in the months before the protests. The recognition that TikTok is both a place to share political and civil rights information, as well as galvanize mass cultural movements, is a new chapter in the platform’s rapid evolution.

Typically, Eos’s TikTok strategy relies on a posting mix of content, from talking about the brand, to featuring products. It also posts about the brand’s values and its purpose of elevating everyday moments. It often features Eos employees in videos, including Kang herself. But the brand took a pause from June 2 to June 9.

“Within TikTok, we paused the frequency of posting. At the time, we felt there was a broader movement happening on social media that [encouraged pausing] so other voices could be heard,” said Kang. “We paused and listened across our platforms, and while we have resumed Instagram and TikTok posts, it’s what I would call more conscientious and thoughtful branded content.”

While new for TikTok, it is familiar territory for other social media platforms; Twitter and Facebook had significant roles, early on in their history, due to the Arab Spring protests that occurred between 2010 and 2012.

But with every heightened cultural moment, there are bound to be faux pas moments. In the case of Arab Spring, it was shoe brand Kenneth Cole. In the case of TikTok, there have not been any over-the-top missteps yet, but brands are erring on the side of caution, regardless.

TikTok has also been adamant that is does not wish to become a platform for politics, going so far as to prohibit political campaign ads and delete the posts or ban the accounts of those who rebel. The inherent viral nature of TikTok content is now proving as a double-edged sword for the company. TikTok’s struggle to retain a sense of sanitized and curated fun potentially puts brands at odds with the real mood of TikTok users. In March, Chinese policy documents showed that TikTok suppressed undesirable content in China, but it has been socially pressured to embrace Black Lives Matter in the United States. When an algorithm glitch occurred in early June that impacted the #BlackLivesMatter tag, the people’s negative reactions were swift and the company apologized.

“I hope TikTok continues to evolve as they grow in North America. It’s very different how we [view] these social platforms, [compared to China],” said Kimberly Konstant, MAV Beauty Brands’ vp of marketing, brand and innovation. “For myself, I hope the company evolves its policies and [allows] people to speak on any topic, so long as it doesn’t harm individuals.”

Marc Anthony True Professional stopped posting on TikTok after May 27, but it will resume posting on Friday, said Konstant. Those posts will be brand- and entertainment-driven, but the company will evaluate whether those posts receive positive traction or if its TikTok audience asks for other types of posts. Marc Anthony True Professional continues to post on Instagram, but that is because it has a long and large presence for several years and knows better how to approach its customers in that space, said Konstant.

“[Pausing] was intentional; we are just starting to grow on TikTok and gain the trust of the community there,” she said of its year-long history on the platform. “We felt, out of respect for the topic and the activism environment, that we should listen and learn, rather than inject a brand message,” she said.