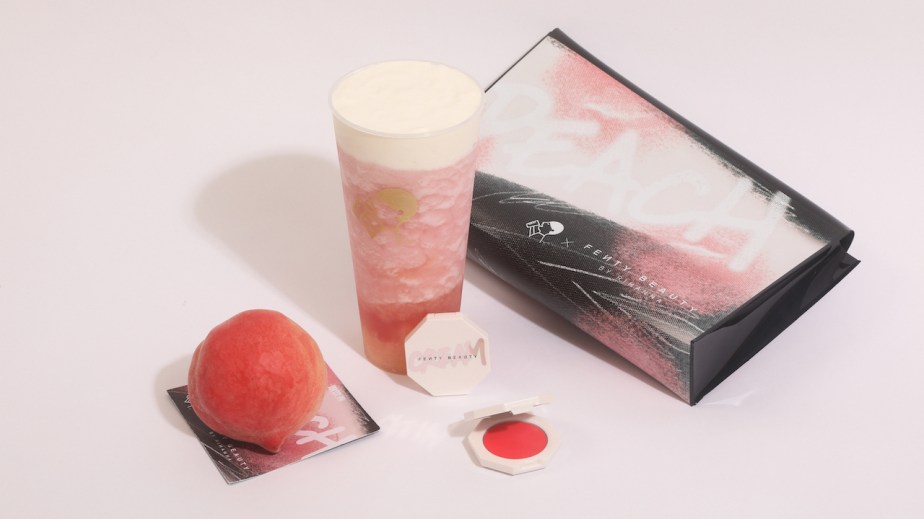 The coronavirus may have closed Fenty Beauty’s influencer house in the U.S., but the brand’s promotional activity is full-steam ahead in China. On April 29, Fenty Beauty announced a collaboration with buzzy bubble tea brand Heytea to promote Fenty Beauty’s new Cheeks Out cream blush collection. The collaboration is the latest in a string of beauty and bubble tea partnerships in Asia aimed at winning over young consumers, which have kicked back into gear now that shops in China have reopened.

Fenty and Heytea are releasing a limited-edition makeup bag that comes with a coupon for a free Heytea Cheese and Peach drink, which relaunched, as well as a limited-edition co-branded Fenty boxed set. So far, the campaign hashtag on Chinese social media platform Weibo has received over 14 million views and 30,000 comments.

Other beauty brands that have collaborated with Heytea include Clarins, L’Oréal and Clinique, as well as Chinese-native beauty brands Pechoin and Marie Dalgar. Clarins, for example, enlisted Heytea for an Instagrammable pop-up in Singapore called House of Clarins in September 2019. Users registered online, and once they visited the pop-up, they received free Clarins samples, a skin-care analysis and a free Heytea drink. The space also included a Pokemon Go-style AR game.

Valued at $2.3 billion, Heytea is a digitally driven startup considered to be a key local competitor to Starbucks in China. Backed by Tencent as well as prominent VC firms Sequoia and Hillhouse Capital, the brand is known for its innovative digital ordering system and marketing campaigns that have Gen-Z and millennial consumers lining up out the door at its locations. The cheese tea being included in the Fenty promotion is its signature drink. Heytea’s upscale, trendy branding makes it appealing to beauty brands as a partner.

“The young generation loves new brands and to discover new things. Compared to the other generations in China, [they are] very curious,” said Fei Xu, market intelligence and consumer insight director at research firm Asia Cosme Lab, of why these collaborations are popular in China.

Adam Knight, the co-founder of digital marketing agency Tong Digital, said that Heytea has “become an accessory to sit alongside your day-to-day lifestyle. It’s also incredibly photogenic,” he said, adding that Fenty will likely receive significant China brand recognition from the partnership. “Heytea is such a well-established brand with so many different brand collaborations under their belt. Fenty Beauty is relatively new to the market.”

Bridget Dalton, a senior consultant at research firm Crowd DNA agreed. “Heytea’s Weibo following is six times that of Fenty in China,” she said. “It’s very smart to align yourself with a brand that’s already about taste and discernment.”

Fenty Beauty was not available for comment, and Heytea declined, stating, “We don’t have an agreement with Fenty on promoting this collaboration outside China.”

Fenty’s “Cheeks Out” branding combined with the copious use of peach emojis in the campaign’s marketing materials makes for a mildly provocative advertising style that Heytea is also known for. Previously, Heytea was forced to apologize for a collaboration with Durex that Chinese government censors accused of being “soft pornography” that could “ruin the Chinese.” The collaboration featured taglines including “Tonight, not a drop left,” and “My cheese will always be on your lips.”

“The euphemism was a little too strong,” said Knight, about the Durex campaign. “The idea of thinking of your bubble tea as sperm was a step too far for a lot of people.”

Beauty bubble tea collaborations have extended to other regions and brands across Asia. In Japan, Shiseido teamed up with upscale Taiwanese bubble tea chain The Alley in 2019 to release a series of beauty products and a limited-edition bubble tea drink. Tealive, one of Southeast Asia’s largest bubble tea chains, launched a promotion in March 2020 with Southeast Asian beauty brand Duck Cosmetics in which they released a line of bubble tea-flavored lipsticks.

“Sharing the similar fanbase of lifestyle-centric females, partnership between beauty companies and bubble tea brands has never been timelier,” said Mindy Lim, the creative content manager of Tealive’s parent company Loob Holding. “Today, bubble tea is not just an occasional treat, but a lifestyle statement. The same goes [for] cosmetics and skin care. It has become important that whatever we eat, drink, wear or do, we must be seen,” she said.

Bubble tea chains are just one example of many food and beverage categories teaming up with beauty brands in Asia or launching beauty products. In March, L’Oréal teamed up with hotpot chain Din Tai Xiang to promote its new Infallible cushion foundation, saying the foundation could withstand the steam of the hotpot. Other examples have included an air cushion foundation by C-beauty brand Perfect Diary and Oreo, a line of crayfish lip glosses, a White Rabbit candy fragrance and KFC-branded nail polish.

“People love sharing these kinds of unique products on social media, including on RED, WeChat and also on TikTok,” said Xu. “For me, this kind of collaboration is a win-win cooperation, because they have the same target, which is the younger generation.”