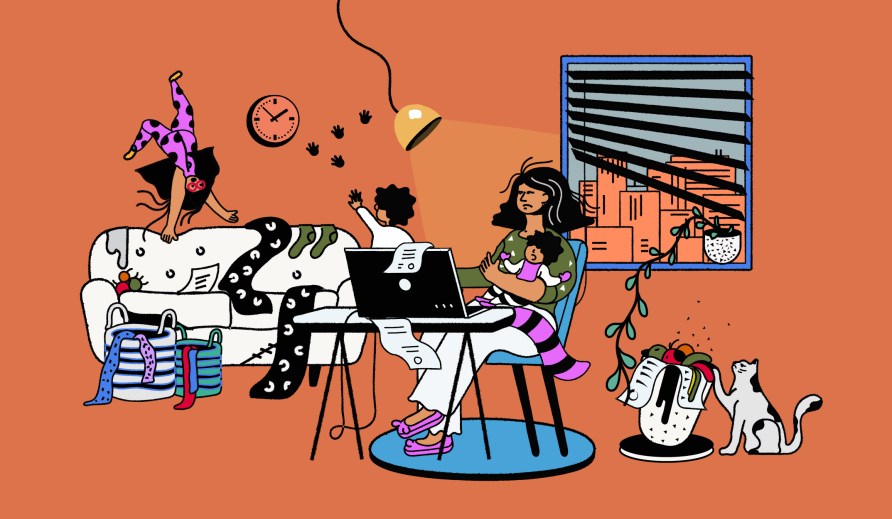 This is the latest story from Glossy sister site Digiday’s Future of Work, a new vertical chronicling how modern work is changing lives of the people within it.

It’s laughable to think that before the onset of the Covid-19 pandemic having a child stumble into a business meeting was a totally alien prospect. Those work-home life boundaries were blissfully separate. Fast forward a year and it’s a very different picture.

After almost a year of rolling lockdowns, school closures, and lack of access to childcare support, battle-weary parents continue to juggle full-time jobs remotely while either homeschooling or babysitting 24/7.

We asked people to share some of their funniest, or most exasperating, moments of remote working with kids in tow. Here is a selection of the best, lightly edited:

Dani Bassil, CEO, Digitas
Once my chair broke in the middle of a review. Like actually broke. I just disappeared and then reappeared after a screech. Also my dog threw up right next to me on a client presentation. Numerous times my daughter Kiki (1) has grabbed the cord on my headphones without me realizing and they just come off mid-sentence. But my favorite was when our three dogs were barking, Kiki was high-pitch wailing, the doorbell rang and I excused myself from a client call, thought I’d muted myself and loudly screamed: “Will you arseholes shut up!” (at the dogs), when I obviously hadn’t muted myself. I then found it was not the Amazon courier I’d expected but our new neighbors introducing themselves. Needless to say I cannot wait to get back to the office.

Casey Georgeson, founder and CEO of skincare company Saint Jane BeautyI call my office my “co-working space” with my three daughters on Zoom classes. My Saint Jane team is all too familiar with the phrase: “Shhhh honey, Mommy’s talking.” We’ve had a few surprises, like when my daughter accidentally broke my office window during her 5th grade Zoom class (she saw a lizard), or when our new puppy, Rocky, piddled on my slippers during a Sephora meeting. My team now fully expects the daily emergencies with a math class, or a spotty internet connection. I’m grateful for their patience as we’ve navigated the chaos!

Luke Bozeat, COO, MediaCom U.K.After a rainy day of home learning/trying to work I came off my last Teams call and headed to our living room. I discovered my 8 year-old son burning off the pent-up energy stored up from a day stuck indoors by jumping around a makeshift soft-play area created using the sofa and various cushions. I bent down to pick up the various digital devices strewn on the floor. Unfortunately, I did this at the same time that Sam performed a summersault and his heel hit me directly in my left eye. The shiner that developed meant I had to spend the first five minutes of every video call explaining what had happened. This was particularly ironic when I was hosting one of MediaCom’s parenting safe rooms!

Divya Gugnani, CEO and founder of Wander Beauty This blurring of the boundaries across my workday and my kids’ school days has meant they have learned an entirely new vocabulary from hearing me on work calls — including but not limited to — f**k, sh*t, idiot. I’ve officially given up on censoring myself and have decided that songs with explicit lyrics are now fair game for family dance parties.

Recently my daughter (6) told me she doesn’t want to be a CEO. She said: “All mommy does is work, work work, and talk, talk talk. She doesn’t get any free time and I like my free time.” My son, Ashvin (8), told me he never wants to have a full-time job because it is too much work. He said this because he heard me on the phone interviewing a candidate who said she only wanted to work part-time because working full-time is too much work while juggling pandemic parenting!

Hamish Nicklin, U.K. CEO Dentsu Media My girls are 9 and 7 years old. Last summer during the heat wave, they spent a lot of time in the garden playing in the paddling pool and with the hose — and almost always entirely free from clothes. One afternoon, just as a call I was on with a bunch of my colleagues on the global media team was coming to an end, my 7 year-old burst into the study, totally naked and shouted at the top of her voice, “I am so hot, Daddy.” I’d only been here about two months and hadn’t physically met any of the people on the call yet as I joined the company during lockdown. It was literally as the call was coming to an end so I still, to this day, have no idea if anyone saw.

Marco Dohmen, VP sales at publisher tech supplier 1plusXTo be able to attend late night calls with clients without disturbing and being disturbed, I have set up my home office in the basement of our house. During a client call my 6-year old woke up and decided she wanted a cuddle and came down to my office. Everyone on the call was understanding so we all decided to take a 10 minute “cuddling break.” When we had a lot of snow a few weeks back, a day of seemingly endless video calls was interrupted when my home office door suddenly slammed open and my two children stormed in screaming: “Daddy, it’s snowing, you need to come out with us and build a snowman!” Pre-pandemic I would not have thought that such situations would actually occur, but today it’s a 24/7 mix of professional and family life and both parts need to be in balance.

Lee Lythe, CIO, Spark Foundry, Publicis GroupeThe big day of the virtual pitch arrived and everything was going perfectly.  As my turn to speak approached, I glanced through my numbers and got ready to launch into my pitch. Winningly smiling at the clients I hit the unmute button. But instead of a smooth cascade of facts and figures, the only sound to emanate from my computer was a blood-curdling shriek as my 18-month-old daughter woke from her afternoon nap in a magnificently bad mood. I’m glad to say that once the clients recovered from their shock, they saw the funny side and it certainly broke the ice. My son (4) has also done his bit to help me with meetings. That typically involves engaging a bemused media owner on the other end with knock-knock jokes that don’t have a punchline. He certainly succeeds at brightening up everyone’s day.

Patrick Affleck, Havas Media Group CEO U.K. and IrelandI vividly remember being midway through a business operations call with the executive team when my son (5) appeared at the bathroom door —  which is opposite my makeshift home office — and yelled: “Daddy, can you come and wipe my bum please!” It was much harder for us all to focus after that.

Guy Melzack, global communications director, MediaCom After 11 months of on and off lockdowns, my daughter (5) is feeling increasingly isolated from her school friends. So we’ve arranged weekly video calls with the people she’s closest with, except they invariably have the opposite impact we’re aiming for. Every week she ignores our calls for her to come to the call, instead playing with her brother (3). Or just as the call is starting, she’ll often begin an impromptu “show and tell” of the most obscure items she can find including toys she hasn’t touched in years or ordinary household items — most recently our colander. When she does come, she’ll ignore her friend on the other side of the call, while she wanders aimlessly around the house, and then will refuse to say goodbye when it’s time to hang up. But after hanging up, she’ll cry incessantly for half an hour because she misses the friend she refused to talk to.

Elspeth Spelzini, strategy director, Starcom My 5-year old’s new favorite way to delay bedtime is to sit at our desk, put on my husband’s headset and have a pretend conference call. While she scribbles illegible notes (actually uncannily like my own work scrawl) she parrots phrases like “Just share your screen Darren” and “I can’t access the jam board” which is hilarious and terrifying in equal measure.

Felicity Long, managing director – Systems Acceleration and Connected Execution, MediaCom Fridays during the lockdowns have been especially hard because we have no childcare for our 3 and 6 year-old sons. A typical day will start at 8 a.m. when we go for a brisk walk to (hopelessly) try and use up some of their boundless energy. I used to claim proudly that we don’t allow iPad time in the day. But I’ve only held out until 11 a.m.

Often I resort to throwing snacks in an attempt to diffuse tantrums, and McDonald’s drive-throughs — previously only offered as special treats when out driving — have become more of a go-to bribe, which I then try to offset by throwing them out on the trampoline in the garden. Colleagues have become very patient about me cooking while on calls with them, and my boss always politely offers to call back at a more convenient time when met with the boys chanting “go away, go away at him.” I tend to stay up later than I should, because it’s so nice being awake with no one asking me any questions.