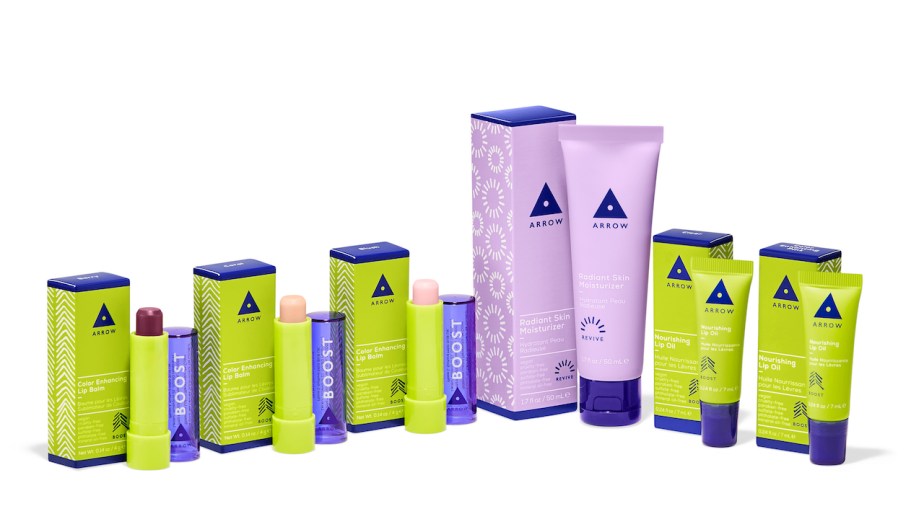 Following the layoffs of 44 of its 94 New York-based employees and the sale of its French business, Birchbox has set its sights on its private-label brands.

On Thursday, Birchbox announced the revamp of its Arrow line that first launched in January 2016. The new version of Arrow, made in partnership with Maesa, features more colorful and modern packaging and follows the company’s updated clean standard that became public facing on Feb. 5. The new products are free from parabens, phthalates and 10 other ingredient groups. In its prior life, Arrow products were “cruelty-free” and vegan.

Today, a moisturizer, lip balm and lip oil debut on Birchbox’s direct site and in subscription boxes; six other products are expected to be released throughout the year and will fall under new Arrow pillars, Boost, Revive, Refresh and Protect. These launches will be available in the U.K. and Spain, where the company has international presence. A separate content site dubbed ArrowBeauty.com is meant to mimic brand partners’ standalone sites such as BenefitCosmetics.com, so customers can find more information, said Allison Edgerton, Birchbox vp of merchandising and marketing. Birchbox’s other private-label brand Love of Color will continue operation but has no plans to relaunch.

“Over the last four years with the Arrow brand, we have been able to collect so much helpful data, read reviews and crowdsource our customers to understand what was next for Arrow. We knew the efficacy, low-effort and high-impact results is what resonated with our casual consumer the most,” she said.

Part of its client research is best displayed in Arrow’s bet on lip care with its lip balm and oil, which is a growing trend in the market. Moreover, Edgerton said Arrow’s current lip Balm is the retailer’s No.1 best-selling lip product.

Birchbox’s intentional growth of its private-label arm comes at a time when nearly every retailer in beauty, from QVC to Target is upping this portion of the business. Largely, it is a play at exclusivity and better margins when customers are increasingly becoming less brand loyal.

“We expect this to become a meaningful portion of the business, but not the majority,” said Edgerton, who would not state the forecasted Arrow sales. Birchbox currently sells product from 250 other beauty brands.

Of the other changes in Birchbox strategy, which included tiered pricing, growing its footprint with Walgreens, closing standalone stores and leaning into the wellness movement, Birchbox CEO Katia Beauchamp said in a statement, “In 2019, we significantly improved the fundamentals of our business, increasing the value of every subscriber and meaningfully improving the unit economics of the business. We introduced tiered pricing that incentivized longer-term commitments; as a result, our subscriber base is smaller but we doubled individual subscriber value, decreased churn to record-low levels, increased margin on our monthly subscription, and saw a 4x increase in customers signing up for 12-month subscriptions.”

Birchbox also downsized its team by 25% globally to “reduce redundancies” operationally. Future plans include moving some of its U.K. operations to Spain, and managing that market from the Barcelona office.

Beyond digital and social media support, Arrow product samples will be featured in a set of subscribers’ March Birchbox boxes. Glossy last reported that the company had 1 million subscribers globally and 2.5 million active customers, people who have shopped with the company in the last 12 months; the company did not comment on current figures.