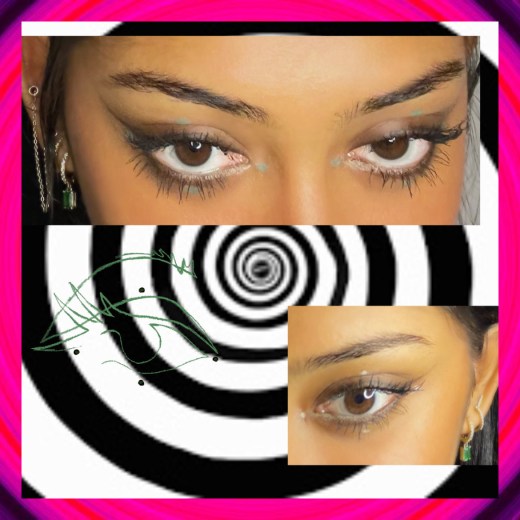 Whatever side of TikTok you’re on, whether it’s BeautyTok, DatingTok or WitchTok, odds are, you’ve seen the #fourdots eyeliner trend, which has amassed 2.2 million views since mid-October. Also known as the “four dots eye trick” or “four dots eye thing,” the trend involves applying four dots of white eyeliner on the inner and outer corners of your eyes, as well as above and below the center of your eye, to create a hypnotic love spell of the sorts.

According to the creator of the look, Michelle Diaz (@bymichellediaz on TikTok, 437,500 followers), a beauty and relationship advice TikToker, the four dots eyeliner is a trick to “make him fall in love.” Inspired by her friend @allyiahsface, who wore one white dot under her eye in 2017, Diaz adapted the creative look from “two [dots] on the inner corners” to the four dots seen in the TikTok that she posted on September 19, which now has 1.7 million views. According to Diaz, “I get told it’s ‘different’ [by men] and I feel like the brightness of the liner brings brightness to the eyes in a very subtle way,” said Diaz. “It adds a sparkle to them.”

As a single twenty-something New Yorker and a novice at cat-eye eyeliner, I decided to try this look as a social experiment. I figured, if nothing else, it will be a cute new makeup look.

Last Saturday night, before going out with friends, I added four dots of white eyeliner to my usual eye makeup look of black eyeliner in my tight line, white eyeliner in my waterline, and about ten coats of mascara. While most people on TikTok use white liquid eyeliner, I decided to use a water-activated eyeliner palette to try my hand at the trend. As my friend and I set out to our first (and last) stop of the night, I wondered if my new makeup look would find me true love, or maybe a free drink. Alas, it was the latter, and I ended the night with a surface-level conversation and a slight buzz. While I could attribute the attention I received to the eyeliner, it may just have been that I was a pretty young girl in a corset top.

Then I tried it again — but this time, during daylight hours. The Sunday after my night out, I used a Colourpop green eyeliner felt-tip pen. which made it much easier to create the small dots, compared to the angled brush I had used the night before. The green also felt more subtle and wearable, especially for daytime — the white contrasted much more with my darker complexion. Equipped with my new look and my eyeliner pen for touchups, and a paperback as extra fall-in-love-with-me ammo, I embarked on the second leg of my journey, to Butler café in SoHo. While I did enjoy a (full price) pistachio milk flat white and a compliment from the (female) barista on my makeup, again, my makeup didn’t seem to make anyone fall in love with me.

The results of my experiment weren’t too far off from my expectations. While I did have a spark of hope that some magical force (the makeup gods?) would cast an aura of attraction upon me, the logical side of my brain knew better.

Some of the comments on Diaz’s TikTok validated my experience, while others seemed to successfully “make men crazy,” as Diaz’s caption states. On said TikTok, Eliza Dumag commented (2,981 likes), “I did this tonight and I kid you not every guy that came up to me couldn’t stop looking it’s powerful. I love this thank youuu.” On the other hand, TikTok user Tanisha Afnan’s attempt “To be pretty and mysterious” yielded in her “Being asked if I have eye boogers,” she explains in her TikTok (131,800 views). You win some, you lose some.