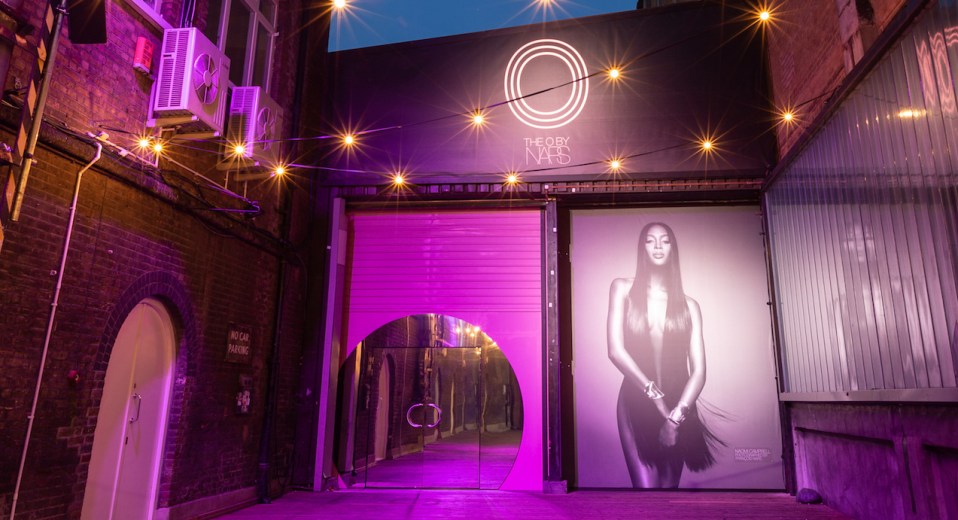 Following the release of its expanded Orgasm makeup collection in April (building on the brand’s hero Orgasm blush, which debuted in 1999), Nars is pulling on the experiential lever. From Friday to Sunday, the Shiseido Group-owned makeup brand will open its first London pop-up, in the Shoreditch neighborhood and called “The O by Nars.” The activation is solely dedicated to Nars’ Orgasm products.

“Orgasm is Nars’ most iconic product. It is the No. 1 selling blush in the U.S. and our top-ranking blush in the U.K. It’s been remarkable to see it withstand the test of time,” said Barbara Calcagni, president of Nars Cosmetics and Shiseido’s Makeup Center of Excellence.

Though Shiseido Group reported in its first-quarter earnings report a slow start for some of Nars recent launches, Calcagni said the Orgasm franchise continues to perform. Since the introduction of the Endless Orgasm palette, Orgasm liquid highlighter, Orgasm oil-infused lip tint and special edition Orgasm Blush, all of these products are seeing top-10 sales in their respective categories, and the original Orgasm blush is experiencing double-digit growth year over year. Additionally, according to Tribe Dynamics, Nars saw a 303% year-over-year growth in earned media value in the U.S. tied to the Orgasm collection (in the January to April time period) and in the U.K., that number was even higher at 999% year-over-year growth.

Fittingly, Nars selected London as the destination for its pop-up not only to satisfy existing Orgasm blush customers in the region but also because it is the brand’s largest market in all of Europe, the Middle East and Africa, said Calcagni. Nars is sold in 120 locations in the U.K., including its own standalone shops and its presence in third-party stores, including Space NK and Spitalfields.

Much like fellow luxury brands, including YSL Beauty, “The O by Nars” borrows from the brand’s other regional pop-ups. Nars’ first-ever pop-up, the “House of Climax” kicked off in September 2018 and was dedicated to the new Climax mascara. Both installations are centered on products — though the Climax activation was a way to draw attention to a new launch, versus a hero offering – and emphasize experience.

“We drew from our key learnings and successes surrounding the ‘House of Climax,’” said Calcagni. “Among the most compelling learnings [was that] each guest was spending, on average, nearly 30 minutes within the experience, which was more than we had expected. Knowing our consumers’ appetites, we wanted to further expand and deepen the consumer journey.”

As such, “The O by Nars” includes five high-touch environments that correspond to the five senses — sight, touch, smell, sound and taste — for a “playground” that mimics an orgasmic experience, said Dina Fierro, Nars vp of global digital strategy and social engagement. For instance, in the “touch” room, 120 latex spheres are on display, and in the “smell” room, swings and couch-like pods are featured.

Additionally, technology plays a key component. Each attendee will receive a personalized radio-frequency identification [RFID] key card, which they can tap on designated touch points to create and capture personal videos and photos. Upon leaving the pop-up, Nars will send follow-up emails featuring guests’ respective content to all participants, encouraging them to share on social using the hashtag #TheObyNars. This communication loop is similar to Nars’ recent foray into virtual try-on, in that the brand is able to retarget customers through email, social and digital.

Nars is expecting 1,800 guests over the course of two days. It messaged the launch via localized tactics, such as at Nars counters and boutiques, and its community of makeup artists, like Vincent Ford (22,000 Instagram followers) and Clayton Reid (4,800 Instagram followers). “While their reach is smaller than many influencers we might engage, their audiences are precisely our target: makeup-obsessed and largely U.K.-based,” said Fierro.

Per Tribe Dynamics data, 216 U.K. influencers have mentioned the Orgasm Collection in their content between January and April. Beauty blogger Keilidh Cashell, with 411,000 Instagram followers, ranked as the collection’s top ambassador, driving $461,000 EMV. Nineteen of those posts were about the Orgasm blush.

The London pop-up is also a ticketed event, like Climax, but rather than just extending free placeholders on TheOByNars.com, Nars is also offering 50 $20 VIP tickets daily. Purchasers will get fast admission into the pop-up and will receive an Orgasm VIP gift. This is an incremental sales opportunity for Nars, as is the addition of selling all Orgasm products at the pop-up. At the Climax iteration, no product was sold.

Calcagni said “The O By Nars” is, indeed, temporary and will not rotate. All future pop-up activations will be dependent on specific markets and products. “As a global brand, we want to ensure we are creating experiences and special moments for our fans and consumers all over the world,” said Calcagni.