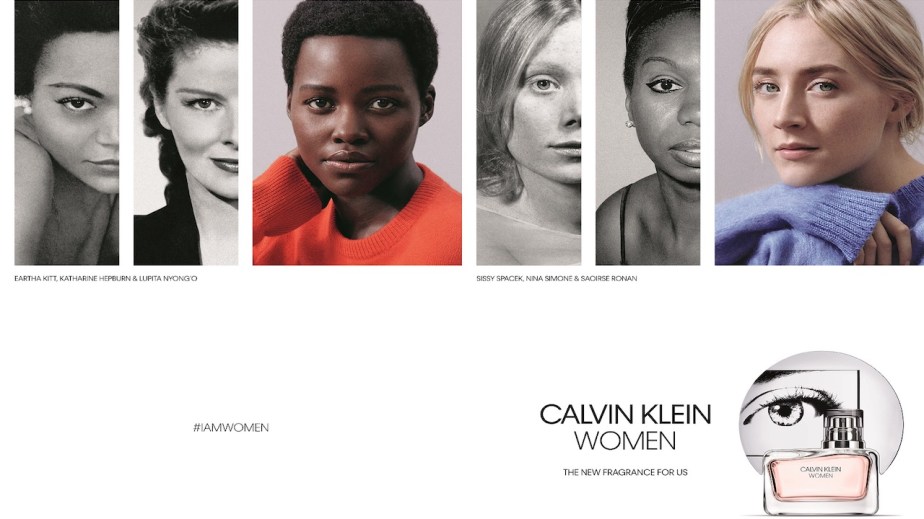 When Calvin Klein and license partner Coty introduced their latest fragrance, Women, in July, it joined a suite of iconic perfumes by the fashion brand including CK One, Eternity, Euphoria and Obsessed. It was the first new perfume franchise the designer house had debuted in 13 years and was the brainchild of newish chief creative officer Raf Simons. A digitally minded and social-forward marketing approach was top of mind.

The creative campaign for Calvin Klein Women featured Lupita Nyong’o and Saoirse Ronan alongside their female inspirations, including Eartha Kitt and Katharine Hepburn for Nyong’o, and Sissy Spacek and Nina Simone for Ronan. Both celebrities took to YouTube and Instagram to promote the campaign using the hashtag #IAmWomen. On YouTube, one video with the duo garnered 5.1 million views, and on Instagram, an in-feed video post saw over 87,000 views. Calvin Klein and Coty looked beyond celebrities and worked with other female influencers like AnnaSophia Robb, with 910,000 followers, and journalist Noor Tagouri, who has 354,000 followers, to drive to the brand’s hashtag.

“We wanted to use digital as a way to highlight authentic interviews and lovers of the brand,” said Simona Cattaneo, chief marketing officer of Coty Luxury Division, of the user generated content approach. “All women could participate and were meant to share experiences and inspirations with people all over the world. We wanted to start a conversation.” Cattaneo explained that, with Women, this was one of the first times Calvin Klein reposted fragrance influencer content on its own channels.

Since the content plan rolled out in August, #IAmWomen has seen nearly 9,000 posts on Instagram. (#BurberryHer has had about 3,000 since the fragrance launch in October). According to Coty, organic engagement is also up. A total of 1.2 million organic impressions have occurred in four months, with 92,000 organic engagements, or likes and comments. (The average engagement rate was nearly 12 percent.) Calvin Klein will be rolling out holiday content with its aforementioned influencers through December. Coty would not disclose the investment in digital for Women, but Cattaneo said it was “much higher than market average.”

In many ways, Women’s social plan was similar to Calvin Klein’s approach with its rebrand around its jeans category dubbed #MyCalvins. It, too, had high-level celebrities at its pillar — in this case, the Kardashian-Jenner family — and also looked to user-generated content for brand awareness. While Tribe Dynamics reported that Calvin Klein had a 37 percent quarter-over-quarter change in earned media value, thanks to My Calvins and Women, resulting in over $30 million in EMV in the third quarter of 2018, this did not translate in parent company PVH’s third-quarter results when it came to the clothes.

Coty would not disclose sales of Women, which was exclusively sold at Harvey Nichols for one month and has since expanded distribution to Macy’s, Ulta Beauty and Nordstrom. In 2017, the Calvin Klein fragrance business generated over $226 million in royalties overall. But Cattaneo said the digital and social roll-out plan helped highlight the “individuality” of each person’s experience with the fragrance.

For many fragrance brands, driving social and online awareness is a key focus, especially as the premium fragrance category is slowing. According to market research firm Euromonitor International, by 2022, the segment is expected to reach $8.1 billion, a forecast period growth of just 13 percent from 2017 to 2012. (In the prior 2012-to-2017 time period, it was over 16 percent.) This is a necessity for traditional perfume companies as emerging brands with celebrity-like stature, like Kim Kardashian West’s KKW Fragrance and Huda Kattan’s Kayali, are coming to play in the sector.

Luxury house Gucci tested the Instagram waters when launching creative director Alessandro Michele’s first fragrance, Gucci Bloom Acqua Di Fiori, in May. (Coty also has a licensing partnership with Gucci). For Michele’s part, he tapped 15 female artists to design illustrations for the brand, which were then promoted on Instagram. Elsewhere, Burberry has been trying to promote its new fragrance, Her, via social channels and the hashtag #BurberryHer. But even makeup-artist-turned-beauty-blogger-turned-mogul Kattan told Glossy earlier this month that she has been grappling with understanding how to sell fragrance via Instagram with her new Huda Beauty sub-brand, Kayali.

While Tribe Dynamics co-founder Conor Begley said Calvin Klein’s activation around Women was promising, Nyong’o’s paid partnership drove the majority of the brand’s EMV: $600,000 of the total $635,000 for the period. (For comparison, the Kardashian-Jenner family #MyCalvins collaboration generated $5.1 million EMV for Calvin Klein, about 45 percent of the total, with UGC representing the other 55 percent.) Still, there is intrinsically something more difficult about selling fragrance on the internet than clothing. “It is easier to be inspired by something like #MyCalvins; it’s easier to replicate,” said Begley. “It is unlikely that you would be inspired to take an Instagram photo of you and your fragrance bottle.”

This is especially true as influencers with compelling content and personalities are trying to capture a piece of the market. “We saw this with [Kim Kardashian West’s] KKW, but people were big supporters of that fragrance launch because they love and support Kim,” said Begley. In October, KKW Fragrance saw $393,000 in EMV, while Calvin Klein’s Women saw nearly $516,000.

Kattan’s fragrance series, Kayli, only launched in November, and though it is still early days, she expressed the difficulties around how the scent category was harder to promote than her Huda Beauty makeup in a previous Glossy interview. “When we started Kayali, a lot of people internally were like, ‘How do we photograph this? This is so hard.’ You can sell makeup through a photo, but you cannot do that with a fragrance — you can sell packaging and bottles, but how do sell smell versus color?” she said. “[My sister and Huda Beauty president] Mona [Kattan] wanted to go into all the base notes, the top notes, everything, but I did not understand that at all and I did not think the customer would, either. We have been trying to build a story [on Instagram] around the five notes and ingredients within each perfume and explain that.”

As Calvin Klein as a brand pulls out of pure print advertising effective February 2019 to focus on a digital and social-forward way of reaching younger customers, on the fragrance side, it, along with other traditional houses, will be forced to contend with influencers like Kattan and Kardashian West, who are bringing newness to the fragrance category via content. “In the short term, these influencers are seeing early successes in a struggling category without the help of being sprayed in a department store, but who is to say if that is sustainable in the long run?” said Begley.

Still, Coty was the No. 1 fragrance company in the world last year, with Calvin Klein Euphoria ranking 34 globally and 13 in the U.S. In a cultural moment when female empowerment remains fever pitch, a conversational and inclusive approach could certainly help get the Women scent take off and reach the heights of CK1 or Euphoria. “We did something completely new in terms of positioning,” said Cattaneo. “We are representing multifacted femininity and strength with Women and our campaign. That is what millennials and younger customers want.”